nCa Commentary Ashgabat, 14 September 2016 (nCa) — Turkmenistan adopted Wednesday the new version of its Constitution, a sophisticated document based on the framework of sovereignty, neutrality and human rights. The initial draft of the Constitution was presented to the public for debate last year. The Constitutional Reforms Committee received and reviewed thousands of ideas […] 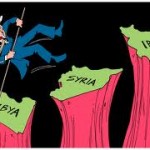