The Chairman of the Milli Majlis of Azerbaijan, Sahiba Gafarova, is on a visit to Ashgabat.

On Wednesday (7 Dec), the Speaker of the Azerbaijani parliament met with President Serdar Berdimuhamedov, had meetings with the heads of both chambers of the legislative body of Turkmenistan and addressed the Turkmen lawmakers.

In the afternoon, the head of the Azerbaijani Parliament laid a wreath at the Monument of Independence of Turkmenistan and visited the National Museum of the Turkmen Carpet.

Meeting with the Turkmen leader

“Negotiations with Azerbaijani partners are always marked by a positive and friendly atmosphere, as well as a special warmth. They are distinguished by deep content, mutual understanding, and full trust, as well as a dedication to high humanistic ideals,” the head of Turkmenistan stressed. 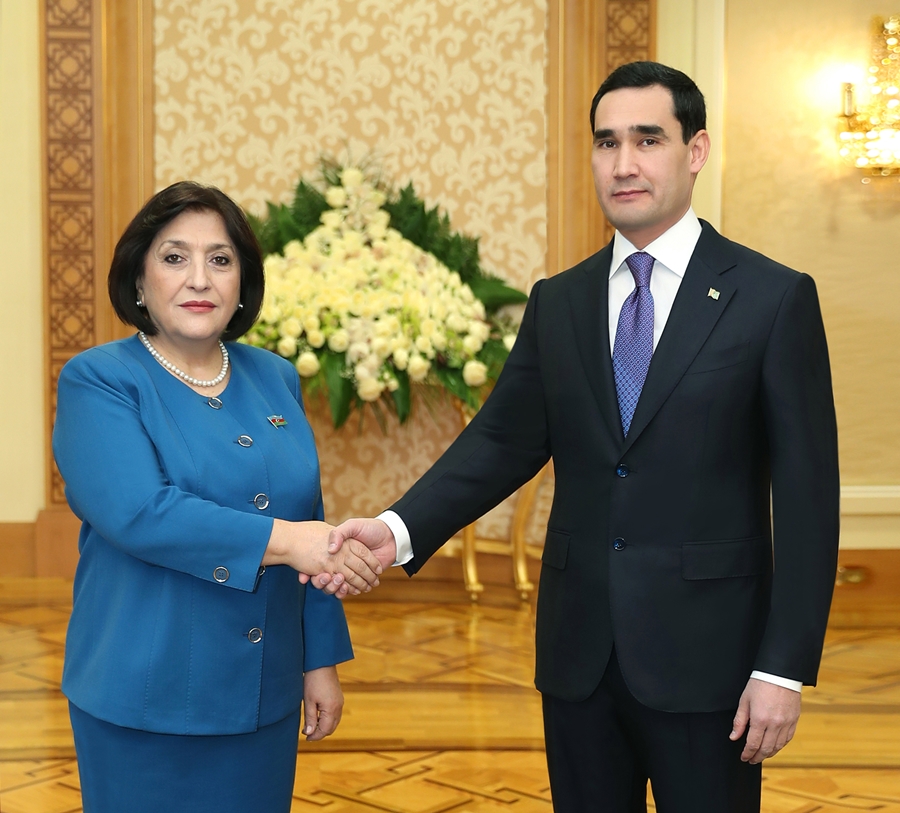 President Serdar Berdimuhamedov also emphasized that Turkmenistan and Azerbaijan now have enormous resource, economic, transportation, and logistics potential, the practical implementation of which serves the interests of both countries’ peoples as well as the region as a whole.

The sides noted the proximity and similarity of approaches to key issues of international politics and interregional relations, in particular, related to ensuring global peace and security, achieving Sustainable Development Goals.

In addition, the two countries closely cooperate on multilateral platforms – the UN, the OTG, the CIS, the OSCE, the Non-Aligned Movement, etc.

In the context of the interstate dialogue, the parties underlined their view that increasing links between the two parliaments will contribute significantly to the further strengthening of the traditional partnership.

The parliamentary delegation headed by Gafarova included almost all members of the established friendship group of Turkmenistan and Azerbaijan.

The topics of interaction on foreign policy issues and in the economic sphere were widely discussed during the meeting of the Chairman of the Halk Maslahaty Gurbanguly Berdimuhamedov with the Speaker of the Parliament of Azerbaijan Sahiba Gafarova.

Arkadag Berdimuhamedov expressed Turkmenistan’s gratitude to the Azerbaijani side for supporting the country’s international initiatives, including co-authorship in 16 resolutions of the UN General Assembly. The Turkmen side is also grateful to Azerbaijan for its support in promoting the initiative to create a Group of Friends on Sustainable Transport and joining it. 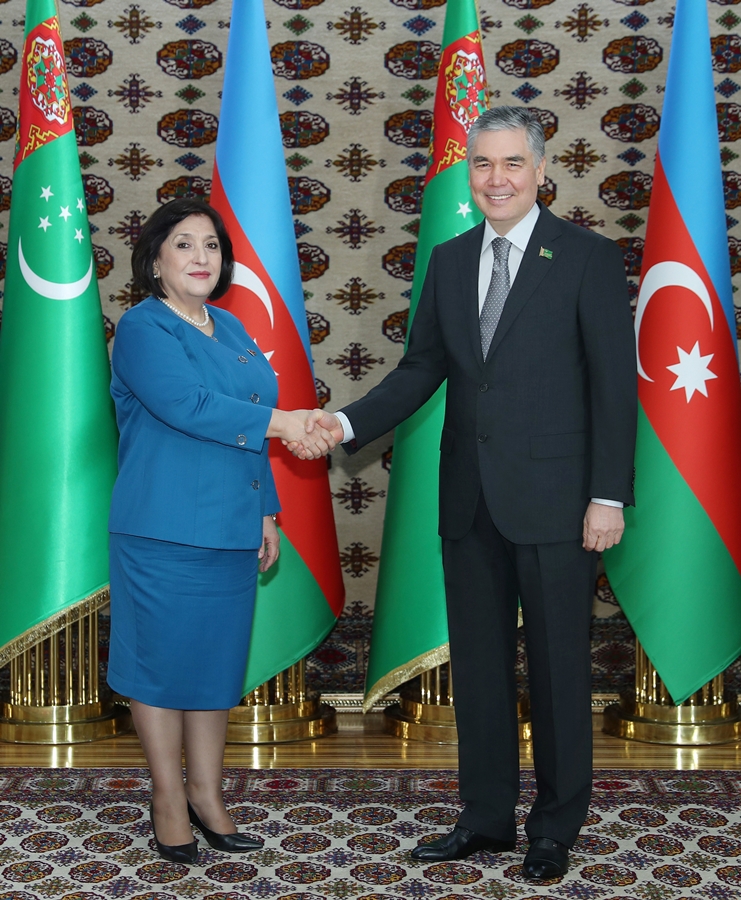 As the initiator of the Group of Friends of Neutrality in the Name of Peace, Security and Development, Turkmenistan hopes that Azerbaijan will consider its membership in this Group.

In addition, the head of the upper house of the Parliament of Turkmenistan expressed hope that the Azerbaijani delegation will take part in the International Conference “Dialogue – a guarantee of peace”, which will be held on 11 December 2022 in Ashgabat.

Arkadag also expressed hope that Azerbaijan will back Turkmenistan’s UN initiative to declare 2025 as the “Year of Peace and Trust.”

“Today, in the face of new challenges, we rely on a clear understanding of the need to strengthen interstate relations, on the similarity of long-term interests in the major directions of world politics, and awareness of the enormous prospects for cooperation,” stressed the Chairman of the Halk Maslahaty Milli Gengeshi.

Speaking about multilateral partnership formats, Gurbanguly Berdimuhamedov called the cooperation of Turkmenistan, Azerbaijan and Turkiye very relevant. As responsible members of the world community, Turkmenistan, Azerbaijan and Turkiye are committed to the peaceful, political solution of international and regional issues, the creation of favorable conditions for the progressive geo-economic space, Arkadag stressed.

Identifying legislative cooperation as one of the key vectors of Turkmen-Azerbaijani relations, Chairman of the People’s Council proposed to intensify contacts in this direction.

Turning to the topic of trade and economic partnership, Arkadag noted that the mutual trade turnover for 10 months of this year has increased almost 5 times compared to the same period of the last year.

Both countries occupy a strategically significant geographical position at the junction of Asia and Europe. This determines the importance of close partnership in the transport and transit sector. According to Gurbanguly Berdimuhamedov, in the light of the growing role of the Caspian basin as the largest transport hub of international importance, a strategic perspective of Turkmen-Azerbaijani cooperation opens up.

The Afghanistan–Turkmenistan–Azerbaijan–Georgia–Turkey transport corridor serves as an example of a productive partnership, the Chairman of the Halk Maslahaty said.

Of course, the Caspian Sea – Black Sea transport corridor connecting the two regions offers the most opportunities for the growth of economic cooperation, industrial and energy cooperation, trade, and investment, he added.

In order to expand mutually beneficial partnership in the transport sector, there is a need for more intensive use of the ports of Turkmenbashi (Turkmenistan) and Baku (Azerbaijan) by working out effective mechanisms for automobile-ferry and railway-ferry links. “Our country is also ready to further promote cooperation on the Baku–Tbilisi–Kars railway route. In this context, it is proposed to intensify contacts through transport,” the Speaker of the upper house of the Parliament of Turkmenistan said.

In the course of the talks, he also emphasized the significant opportunity for cooperation in the energy sector. Both Turkmenistan and Azerbaijan support a diversified plan of energy supplies to global markets, particularly in the European direction. The parties’ approaches are the same in this area.

As for cooperation in the humanitarian field, Turkmenistan confirms its openness to organizing cross-cultural Days in the near future.

There are also good opportunities for cooperation in the field of tourism. The main factor here is the rich historical and cultural heritage of Turkmenistan and Azerbaijan.

Arkadag also noted the active nature of cooperation between the two countries within the framework of the International Organization of Turkic Culture (TURKSOY).

In turn, the Chairman of the Milli Majlis of Azerbaijan Sahiba Gafarova stressed that this year is marked by the 30th anniversary of the establishment of bilateral diplomatic relations. All this time, relying on mutual goodwill, Azerbaijani-Turkmen cooperation has been steadily growing, which is directly facilitated by regular trusting contacts at the level of heads of state.

She also confirmed the focus of the Azerbaijani side on further development of partnership with Turkmenistan through legislative bodies.

After the meeting, Gurbanguly Berdimuhamedov and Sahiba Gafarova signed a Memorandum of Understanding on cooperation between the People’s Council of Turkmenistan and the National Assembly of Azerbaijan.

Speaker of the Azerbaijani Parliament awarded the Order of Turkmenistan

The award was presented to Gafarova by the Chairman of the Halk Maslahaty Gurbanguly Berdimuhamedov.

Meeting in the Majlis of Milli Gengesh

Chairman of the lower house of the Parliament of Turkmenistan Gulshat Mammedova and Sahiba Gafarova discussed the state and prospects of inter-parliamentary cooperation, the possibility of intensifying the exchange of experience in the field of lawmaking.

Noting that Turkmenistan chairs the Dialogue of Women of Central Asian Countries this year, Chairman of the Mejlis spoke about the work being done in this capacity to exchange experience in ensuring gender equality in various fields, peaceful and sustainable development, environmental protection, as well as supporting women’s entrepreneurship and improving women’s social protection at the legislative level. 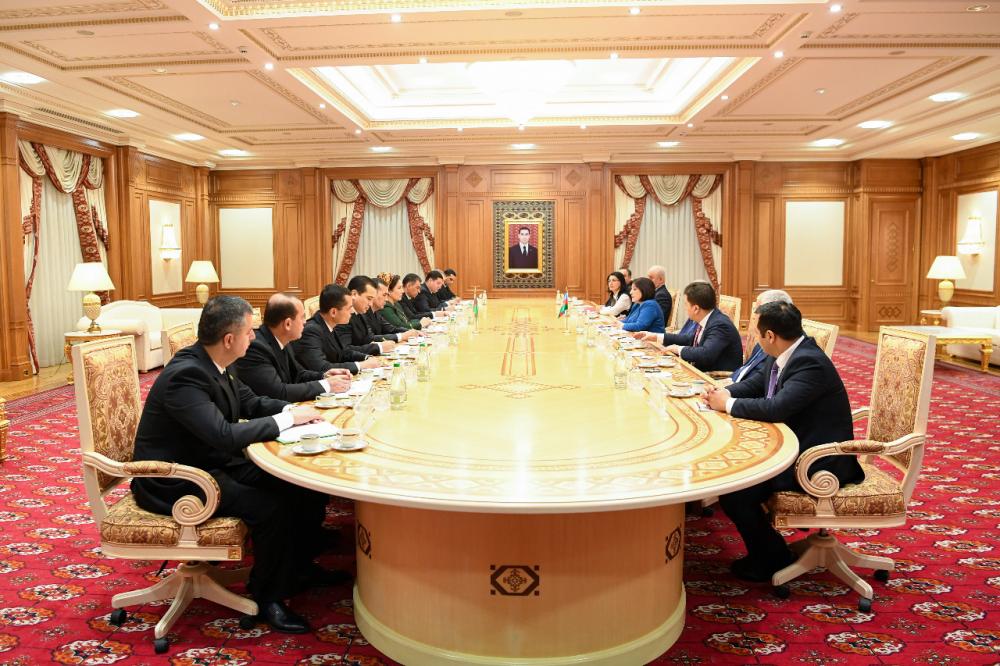 In turn, S. Gafarova stressed that Azerbaijan attaches great importance to the development of comprehensive ties with Turkmenistan, noting the success of the Azerbaijani-Turkmen inter-parliamentary cooperation both in bilateral and multilateral formats within the framework of international structures.

After the meeting in a narrow format, the Chairman of the Milli Majlis of Azerbaijan addressed the deputies.

Addressing the audience, Gafarova noted that her first visit to Ashgabat coincided with the 30th anniversary of the establishment of diplomatic relations between Turkmenistan and Azerbaijan.

She emphasized the commonality of two peoples, who have been living in the neighborhood for centuries and have a common history, culture, language, and religion. 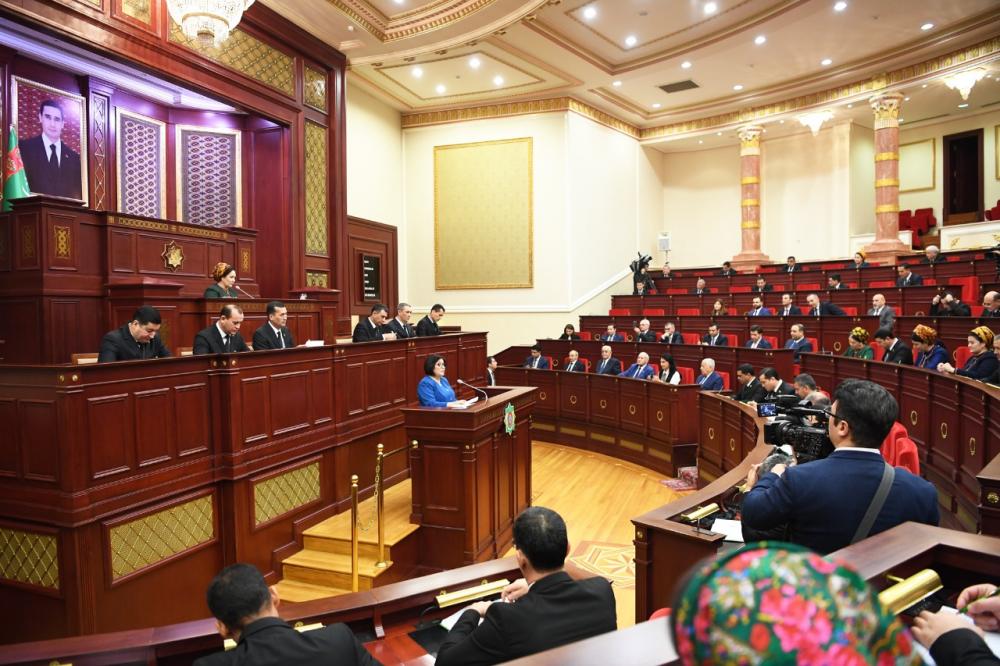 All this contributes to the development of Azerbaijani-Turkmen cooperation in various directions. The result of the summit meetings was the establishment of successful bilateral interstate contacts in the political, economic, cultural and humanitarian spheres, Gafarova continued.

Today, the cooperation between the two countries is of a strategic nature, which creates conditions for the further development of mutually beneficial ties.

Various joint events, meetings and consultations boost the partnership, the Speaker of the National Parliament of Azerbaijan said.

As the speaker of the National Parliament said, Azerbaijan fully supports the permanent neutrality of Turkmenistan, President Ilham Aliyev invariably emphasizes that fraternal Turkmenistan has achieved great success following this principle in its foreign policy.

Touching upon the topic of further development of inter-parliamentary cooperation and the significance of the current visit to Ashgabat, Sahiba Gafarova stated that successful contacts have been established today between various organizations of the two countries, including with legislative bodies.

As noted, parliamentary diplomacy plays a special role in realizing the potential of bilateral relations and solving upcoming tasks, including at the regional level, in promoting Islamic cooperation. In this context, the Speaker of the Azerbaijani Parliament expressed gratitude to G. Mamedova for participating in the conference of the Parliamentary Network of the Non-Aligned Movement, held this year in Baku.

Along with bilateral relations, great attention is paid to the development of multilateral cooperation, Speaker of the Parliament S.Gafarova said, emphasizing in this regard Azerbaijan’s support for Turkmenistan’s positive initiatives at the international level.

At the end of her speech, Speaker of the Azerbaijani Parliament Sahiba Gafarova thanked Chairman of the Mejlis Milli Gengesh Gulshat Mammedova and all participants of the meeting for their attention and hospitality. ///nCa, 8 December 2022 (photo source – TDH, Parliament of Azerbaijan)