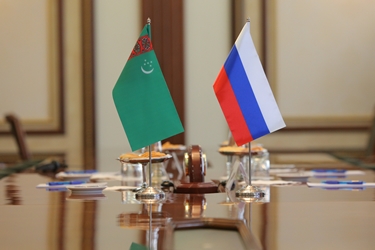 Today, on 6 December 2022, Russian Foreign Minister Sergey Lavrov will meet with Deputy Prime Minister, Minister of Foreign Affairs of Turkmenistan Rashid Meredov, who arrived in Russia to participate in the 12th meeting of the Intergovernmental Turkmen-Russian Commission on Economic Cooperation.

In this regard, the Russian Foreign Ministry has published an overview of the current state of Turkmen-Russian relations. Here is the text of this press release:

“Turkmenistan is a strategic partner of Russia in the Central Asian region. The Declaration on deepening the strategic partnership between the two countries, signed during the official visit of the President of Turkmenistan S.G.Berdimuhamedov to the Russian Federation on 10 June 2022, confirmed the mutual intention to strengthen and expand multifaceted cooperation. Russian-Turkmen relations are distinguished by a trustworthy political dialogue, are traditionally cordial, and are dynamically developing in a variety of areas. The shared historical past and mutual core interests of the two peoples are the key to this.

During the talks, Sergey Lavrov and Rashid Meredov will exchange views on topical issues of multifaceted cooperation with an emphasis on trade, economic, cultural, humanitarian and educational spheres. It is expected to review current regional and international issues, including the situation in Afghanistan, as well as discuss cooperation on various multilateral platforms, primarily in the CIS, the “CA5+Russia” and the “Caspian Five” formats, the UN.

Russia is among the most significant trading partners of Turkmenistan. In the eight months of 2022, the volume of trade turnover reached US$ 474.8 million, Russian exports to Turkmenistan amounted to US$ 357.8 million, imports from Turkmenistan to Russia – US$ 117.0 million. Since April 2019, Gazprom PJSC has resumed imports of Turkmen natural gas, the volume of which is increasing year after year. Dozens of major Russian businesses, including KAMAZ, Tatneft, and Vozrozhdenie, operate in the country’s market.

Interregional contacts provide a considerable reserve for Russian-Turkmen economic cooperation. Today, the regions of Tatarstan, Astrakhan, and Chelyabinsk, as well as St. Petersburg, are showing the most activity in the Turkmenistan direction.

The Intergovernmental Russian-Turkmen Commission for Economic Cooperation plays an important role in deepening bilateral economic ties. The joint commission’s Co-Chairs, Deputy Prime Minister of the Russian Federation A.L.Overchuk and Deputy Chairman of the Cabinet of Ministers, Minister of Foreign Affairs of Turkmenistan R.O.Meredov, “check the clock” on the most pressing economic issues on a regular basis (the meetings of the co-chairs were held on 8 April and 15 November 2022). There is a high-level Group for Trade and Investment Support within the commission that works to coordinate bilateral business ties and create a favorable business climate for Russian and Turkmen companies.

Moscow and Ashgabat cooperate closely in the fight against dangerous infectious diseases. Turkmenistan was among the first to register Russian anti-coronavirus drugs Sputnik V, EpiVacCorona and Sputnik Lite on its territory. Last year, 330 thousand sets of Sputnik V vaccine were delivered to Ashgabat, and in January 2022 – 800 thousand doses of Sputnik Lite, of which 300 thousand were provided free of charge.

Humanitarian ties, contacts in the cultural, educational and scientific spheres remain an essential part of Russian-Turkmen relations. They contribute to the strengthening of friendship and mutual understanding between the two peoples. More than 30 thousand students from Turkmenistan study at Russian universities. The most popular are educational institutions in Moscow, St. Petersburg, Voronezh, Kazan, Rostov-on-Don, Samara, Tver. The parties are working on the issue of opening a Russian-Turkmen University in Ashgabat.

A joint Russian-Turkmen Secondary School named after A.S.Pushkin has been operating in the capital of Turkmenistan since 2002. High standards of education allow its graduates to pass entrance exams at leading universities in Russia and Turkmenistan. The possibility of building an additional school building for teaching junior classes is being considered.

In 2023, it is planned to hold a number of previously postponed events in the field of culture, including cross-cultural days, a week of Russian cinema in Turkmenistan, exchange tours of top theaters.” ///nCa, 6 December 2022