With the signing of the Uzbek-Kyrgyz border deal, the China-Kyrgyzstan-Uzbekistan railway project (CKU) has stepped closer to reality.

CKU had already returned to limelight when during the SCO summit in Tashkent on 14 September 2022, the three countries – China, Uzbekistan, and Kyrgyzstan – agreed to jointly fund the feasibility study for the project.

The deadline for the completion of the feasibility study is June 2023 and the three parties will share equally in its funding.

The CKU project has been on and off the drawing board since 1997. It is only now that it has received a firm commitment from the participating countries.

The estimated cost of the project could possibly be USD 4.1 billion, to be met through direct funding or public-private partnership.

There would be 90 tunnels along the track.

CKU will reduce the distance between China and Europe (also Middle East) by about 900 km. 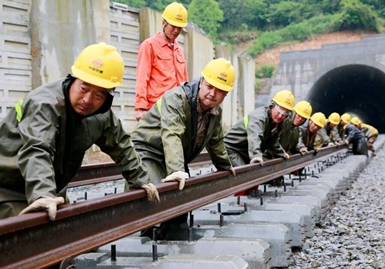 This will lead to saving in the shipping time by seven or eight days.

From the Chinese side, the CKU will connect with Kashgar Rail Terminus, linking it to the Chinese national railway network. On the Uzbek side, it will terminate at the Andijan city. In the Kyrgyz territory, it will pass through the Naryn and Osh regions.

Because of linking with the Uzbek national railway system, it will connect with the inter-regional tracks in the north-south and east-west direction, some of them already in operation and some in different stages of implementation and/or planning. These include the Kazakhstan-Turkmenistan-Iran railway line, Central Asia-Middle East corridor, Lapis Lazuli corridor, Turkmenistan-Afghanistan, Tajikistan railway line, and Pakistan-Iran-Turkey railway line.
CKU.

The China-Kyrgyzstan-Uzbekistan-Afghanistan route, also called Kashgar-Hairatan corridor, ends in Afghanistan whereas the CKU terminates in Uzbekistan. A test train of two railway wagons reached from Kashgar to Hairatan in September 2022, covering the distance in 10 days. The test cargo passed through the territory of Kyrgyzstan by trucks.

It is possible that the concepts (and, therefore, routes) of the CKU and Kashgar-Hairatan could be merged, leading to reduction in project costs and increasing the scope of wider connectivity. /// nCa, 29 November 2022