Home » Gurbanguly Berdimuhamedov on an official visit to Moscow

On Tuesday, 1 November, Chairman of the upper house of Parliament Gurbanguly Berdimuhamedov went on an official three-day visit to Moscow.

On the first day of the visit, Berdimuhamedov met with the Chairman of the Federation Council Valentina Matvienko.

Before the meeting, they got acquainted with the photo chronicle of the mutual visits of the parliamentary delegations of Russia and Turkmenistan. 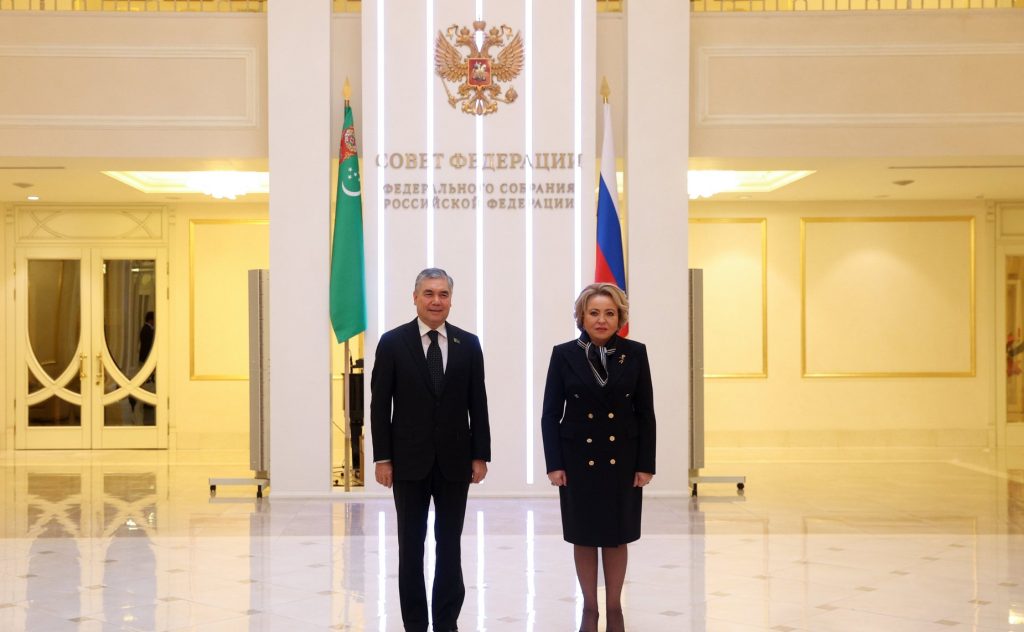 “The strategic partnership between Russia and Turkmenistan is featured with the exceptional stability of the political dialogue based on the principles of mutual respect, taking into account each other’s interests,” Matvienko said, emphasizing Berdimuhamedov’s special merits in achieving a high level of cooperation.

She highly appreciated the special attention paid by Gurbanguly Berdimuhamedov to strengthening friendly ties between Moscow and Ashgabat, expanding mutually beneficial cooperation in all areas.

The speaker of the Federation Council noted that trusting relations have been established between the leaders of Russia and Turkmenistan. This year they have met five times, both in a bilateral format and within the framework of multilateral events. “Such an intensive dialogue at the highest level, of course, gives impetus to the entire complex of Russian-Turkmen cooperation,” she believes. 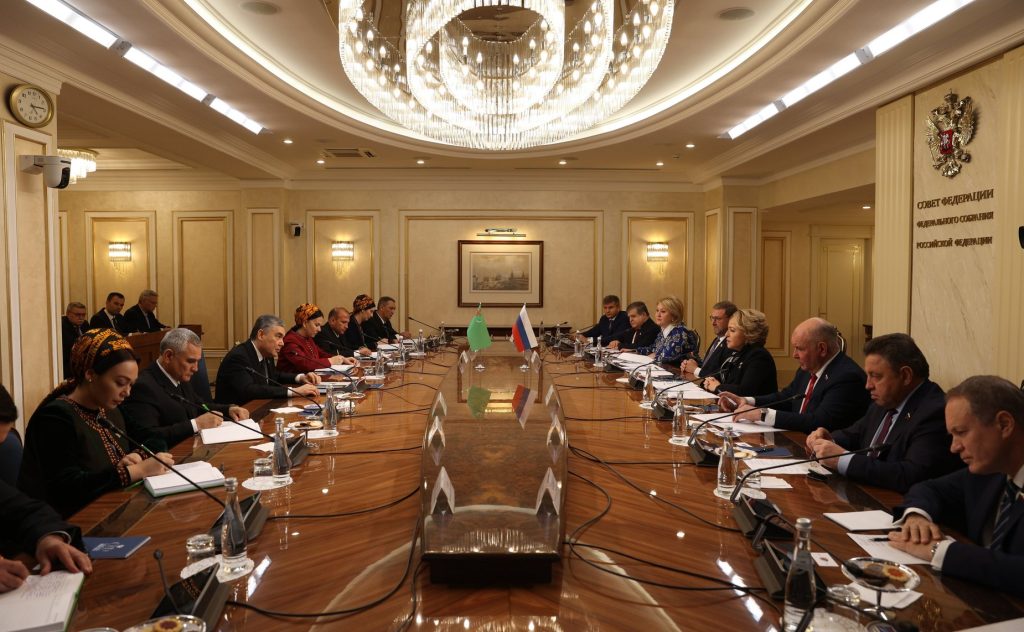 Matvienko recalled the Inter-Parliamentary Forum of Central Asian States and the Russian Federation held in May this year and the Women’s Dialogue in the new “Ashgabat 5+1 format”.

In this regard, she voiced the idea of creating mechanisms for youth inter-parliamentary cooperation under the “Central Asia + Russia” format. “This will enable not only the establishment of stable links between representatives of new generations, but also the transfer of our considerable legislative knowledge to young people and the development of an international dialogue,” Matvienko said.

She also suggested inviting young parliamentarians to the next meeting of the Inter-Parliamentary Forum of Central Asian Countries and Russia.

According to the Federation Council Speaker, Russian legislators place a high value on the development of bilateral parliamentary engagement with Turkmenistan. Interregional cooperation is an important aspect of it. “In addition to the Astrakhan region, Tatarstan and St. Petersburg have been successfully working with Turkmenistan for a long time, Chelyabinsk Region is actively involved. Sixty subjects of the Russian Federation maintain ties with Turkmenistan in one way or another,” Valentina Matvienko said.

She expressed hope that during the next visit to Russia Gurbanguly Berdimuhamedov will visit one of the Russian regions.

The head of the upper house of the Russian parliament highly appreciated the interaction of the two countries in international formats, primarily within the framework of the CIS, the Caspian five, at the UN.

Valentina Matvienko invited Gurbanguly Berdimuhamedov to take part in the activities of the CIS Interparliamentary Assembly, which will be held next spring in St. Petersburg.

The Chairman of the Federation Council noted that one of the priority areas of bilateral cooperation is education, expressing readiness to continue joint work with the Turkmen side.

In turn, Chairman of the Halk Maslahaty of Milli Gengesh of Turkmenistan stressed that parliamentary cooperation makes an important contribution to the consistent development of the strategic Turkmen-Russian partnership, strengthening friendship and mutual understanding between the two peoples. The contacts of the legislators of the two countries, their professional and personal communication acquire a systematic character, becoming an integral part of the entire complex of interstate cooperation, contribute to the formation of an initiative and principled position of our parliamentarians on the most important aspects of international issues, he said.

In this context, Berdimuhamedov supported the proposal of the Russian side to establish an Inter-Parliamentary Commission on Cooperation, stating the undoubted timeliness and relevance of this initiative.

According to the head of the Halk Maslahaty, the inter-parliamentary cooperation of Turkmenistan and Russia is designed to ensure the solution of several tasks.

“In the light of the complication of the global situation, it is necessary to unite efforts in the approval of international law, the principles of the UN Charter in the fight against legal nihilism, the erosion of the functions and mandates of the supporting international institutions. Parliamentary diplomacy today is aimed to become an instrument of peace, cooperation and mutual understanding,” Berdimuhamedov said.

Another priority of joint work is to promote the internal political stability in the two countries. “It is necessary to put firm legislative barriers to manifestations of extremism and radicalism, attempts to undermine and discredit state foundations, the propagation of false values and meanings into the public consciousness,” he stressed.

In this aspect, it is especially important to attract a youth audience and women parliamentarians. The establishment of mechanisms for youth interaction can help in this process.

“Great and creative work awaits our lawmakers in the implementation of the Sustainable Development Goals,” Berdimuhamedov continued, stressing that food security, ecology, affordable medicine and education should constantly be in the focus of their attention.

As the Chairman of the Halk Maslahaty noted, the peoples of Turkmenistan and Russia share such fundamental values as creativity, love for the Motherland and native hearth, sanctity of family ties, respect for other peoples, justice, solidarity and mutual support.

In Berdimuhamedov’s opinion, there is a need to develop and strengthen these values, to create clear and reliable legislative frames that will provide a political and spiritual backup for moving forward in line with the sovereign choice of the model of state and social structure.

He called for more active use of parliamentary levers to enhance cooperation in the field of education, culture, projects and contacts between the creative and academic community of Turkmenistan and Russia.

Turkmenistan and Russia have established an Inter-Parliamentary Cooperation Commission

Following the meeting, the parties signed an agreement on the establishment of the interparliamentary commission for cooperation between the Federation Council and the Halk Maslahaty of Turkmenistan. 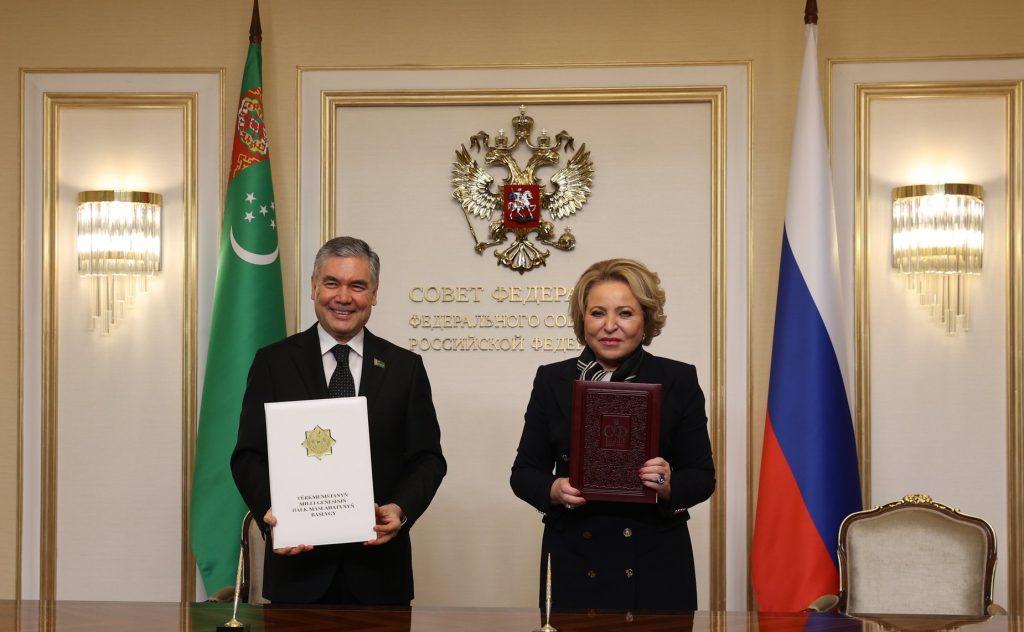 According to the documents, the commission, based on the analysis of the inter-parliamentary relations of the parties and the prospects for their further expansion, will prepare proposals and recommendations for the parliaments of both countries in all areas of their joint activities. The commission will meet at least once a year alternately in Turkmenistan and in Russia.

Matvienko proposed to hold the first meeting of the commission in Moscow and Astrakhan.

After the talks, Valentina Matvienko told reporters that the sides had considered almost the entire range of issues on the agenda between Russia and Turkmenistan.

Special attention is paid to the role of parliaments in the implementation of the Declaration signed by the Presidents of Russia and Turkmenistan on deepening Strategic Partnership.

The head of the Federation Council urged to pay more attention to the development of economic ties, and first of all, in the field of energy. “We agree that in today’s world, bilateral cooperation in this field, as well as coordination of efforts in global energy markets, is critical for both states,” she said.

Furthermore, Valentina Matvienko emphasized the significance of stepping up efforts to promote scientific and technological collaboration, economic diversification, and the growth of industries and companies with a high degree of processing focused on the production of high-tech products. 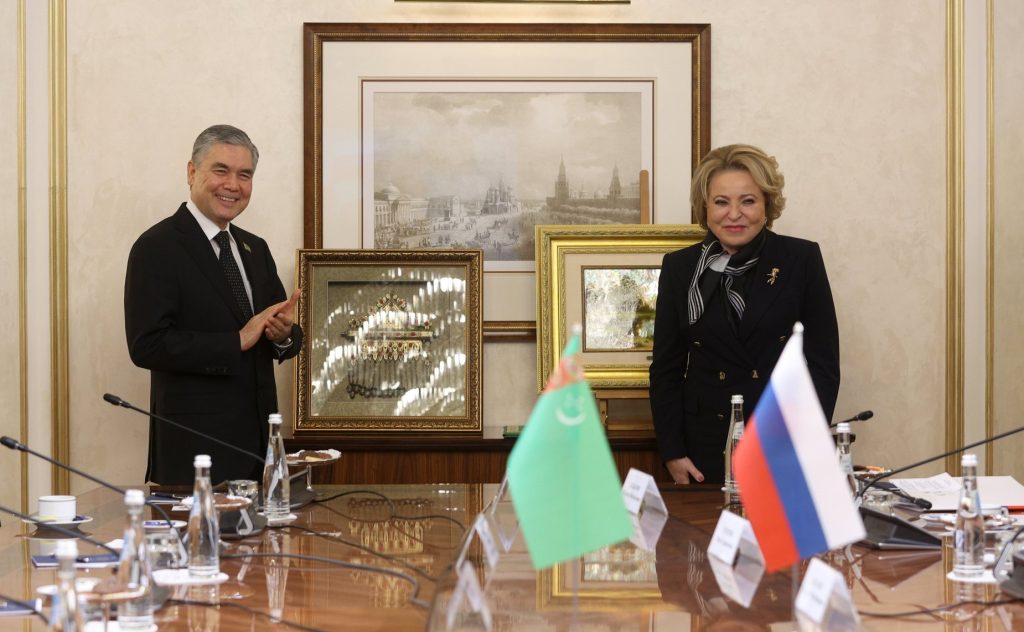 Matvienko and Berdimuhamedov exchanged memorable gifts. In particular, the head of the Federation Council was gifted a traditional Turkmen women’s brooch – amulet tumar, and the chairman of the Halk Maslahaty was presented with a picture depicting a Russian autumn scene.

During the visit to Moscow, the chairman of the upper house of the Parliament of Turkmenistan will speak at a meeting of the Federation Council, and also met with senators.

Turkmenistan may begin construction of a Turkmen-Russian university next year

In 2023, the foundation of a joint Turkmen-Russian university in Ashgabat can be laid in Ashgabat, Speaker of the Federation Council Valentina Matvienko said after the talks with the head of the Halk Maslahaty.

“We are also grateful for the initiative to establish a Russian-Turkmen university in Ashgabat. We are doing everything in our power to speed up the implementation of our part of the work,” Matvienko said.

Gurbanguly Myalikgulyevich has already announced that next year, in the year of the Russian language, we can hold groundbreaking work,” Matvienko said.

She also thanked Gurbanguly Berdimuhamedov for his unwavering attention to the Russian language and Russian culture in general. ///nCa, 2 November 2022