Home » Central Asian-European Relations: A Retrospective of the Issue 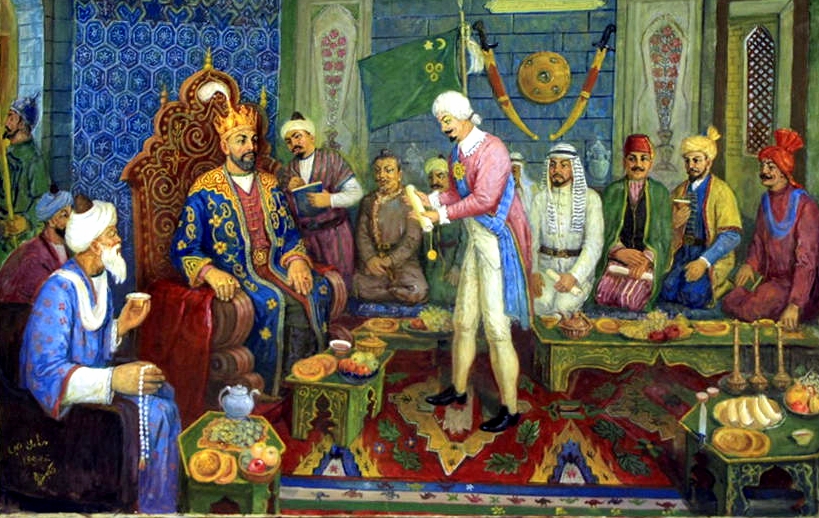 In the history of mankind there are many examples of historical, cultural, humanitarian, trade, economic and ethno-political interaction between European and Asian civilizations. The Great Silk Road, which in antiquity and the Middle Ages connected the Mediterranean nations with the Far East by traversing the entire Asian continent and running from the Atlantic Ocean’s shores to the Pacific Ocean’s, is the best illustration of this. It was not just a road or even a system of roads from ocean to ocean, it was a complex cultural and economic bridge between the West and the East, serving the peoples in their quest for peace and cooperation, the exchange of ideas, technologies, crafts and beliefs.

Central Asia was especially dotted with caravan routes. This region was crossed by dozens of trade routes connecting China with the Roman Empire and European states, Asia Minor and Persia.

There, the most significant ethnic dynamics, active cultural exchange, large-scale commerce activities, diplomatic agreements, and military alliances were made. It is worth noting that the dominant role on the entire Great Silk Road was played by the Sogdians, whose language served as lingua for trassa (the language of trade), up to the VIII century.

Another stage of the interpenetration of cultures is the period of Hellenism associated with the campaigns of Alexander the Great, resulted in the spread and further synthesis of Greek culture with the East, primarily with the achievements of the Central Asian and Persian heritages.

However, the most striking stage of the Central Asian-European interaction is associated with the name of Amir Temur. The powerful state of Sohibkiran attracted the eyes of the rulers of Europe, having a significant impact on the overall course of world events. European monarchs and rulers sought to enter into diplomatic correspondence with the creator of a grand empire.

Part of this correspondence has survived to this day, including two letters from Amir Temur to King Charles VI of France (1380-1422). Both letters were delivered by the Catholic Archbishop of Sultania John III, who was sent to Europe in August 1402. In these letters, Amir Temur expressed his desire to establish regular trade relations with France.

The only letter of Charles VI, addressed to Amir Temur, dated 15 June 1403, has been preserved. The letter pays great attention to the development of trade relations between France and the state of Amir Temur. From the correspondence between Charles VI and Amir Temur, it is clear that both rulers were interested in concluding a trade agreement. However, the death of Amir Temur in February 1405 did not allow him to finish the work he had begun.

At that time, Amir Temur and his son Miranshah also conducted diplomatic correspondence with England. Two letters of the English King Henry IV (1399-1413) in Latin, addressed to Temur and Miranshah, have been preserved. The same Archbishop of Sultania John, mentioned above, acted as an intermediary between the rulers of the two powers.

In his letter to Miranshah, Henry IV expressed gratitude for his invariably friendly and benevolent attitude towards Catholics, as well as for “ensuring the safety of Christian merchants.

The letter of the English king expresses the hope that “the great sovereign will continue to patronize Catholics and will not deviate from this.”

Among the European rulers, contemporaries of Temur, the young king of Castile and Leon, Henry III de Trastamara (1390-1407), was especially interested in the East. During the celebration of his triumph in Asia Minor, Temur, who received many ambassadors, graciously received Castilians. The Castilians returned to their homeland together with the ambassador of Temur, Muhammad Kazi, who gave him letters from his sovereign at the reception of the king.

Temur’s friendly attitude caused Henry III to desire to establish a reciprocal embassy “in order to consolidate the friendship that had arisen between the two sovereigns.” The embassy was headed by Rui Gonzalez de Clavijo. The Spanish embassy, which arrived in Samarkand on 8 September 1404, was received by Temur in the Dilkusho Palace garden. Clavijo’s “diary” is the most valuable source for understanding Temur’s foreign policy of the period from 1370 to 1404.

Unfortunately, after the death of Amir Temur, trade and diplomatic relations with Western Europe, which he laid down, did not develop on a proper interstate scale. However, it continued its development within the framework of trade, merchant, intelligence, scientific and other missions.

The Moscow diplomat Anthony Jenkinson, who traveled to Samarkand, Bukhara, and Khorezm in 1558–1560, provides quite a bit of information regarding the British presence in Central Asia. The main purpose of Anthony Jenkinson’s journey was to find the closest and most convenient way to India through the Central Asian khanates.

In 1740, an expedition consisting of two English agents, George Thompson and Ronald Hogg, was sent to Khiva and Bukhara through the “Russian Company” to identify opportunities for expanding trade relations and obtaining debts from counterparties. Both reached Khiva safely, but by coincidence only Georg Thompson was able to visit Bukhara.

An Englishman named Alexander Boris, a member of the Royal Society, visited here in 1831-1833 and left a description of the Bukhara Khanate.

In 1721, an Italian from Russia, Florio Beneveni, visited Bukhara. He lived in the Bukhara Khanate for five years and compiled a kind of diary – the “Brief Journal of Envoy Florius Beneveni”, which consistently reflects data on the internal situation of the Khanate, international relations, provides full-fledged information about the waterways and land routes, the natural resources of the Khanate, the personalities of the khans and their inner circle, as well as customs at the courts.

In 1888, entrepreneur Aloisi imported French-Corsican silkworm eggs to Central Asia, and in 1896 opened a silkworm eggs plant in Kokand. In 1898, plants began operating in Samarkand and Bukhara, and then a series of small production facilities in the Ferghana Valley (in particular in Chust, Namangan). The French are also opening paper-spinning factories near Tashkent with 70 looms, which supplied the civilian population and the military district with fabrics of all kinds.

European research, cultural, and humanitarian missions to Central Asia are of particular interest. The greatest scientific significance in this context is Arminius Vamberi’s journey through Iran and Central Asia as a dervish in 1862-1864, undertaken at the expense of the Hungarian Academy of Sciences.

In 1863, in Tehran, he joined a group of pilgrims returning to Central Asia from Mecca, and visited Khiva, Bukhara, Samarkand and Herat. The orientalist scientist, who had an amazing ability to learn languages – Vambery, observed social and political relations, customs of local residents, was interested in geography and statistics, collected manuscripts on the history of Central Asia.

It is also advisable to note the scientific interest of the French in the historical and cultural heritage of Central Asia. Thus, a number of scientists have linked their fate with the Turkestan region for a long time, including: geologist Barbat de Marny; scientist and teacher Joseph-Antoine Castanier – a member of the Turkestan Circle of Archaeology Lovers and the Turkestan Department of the Russian Imperial Geographical Society; architect Alexey Benois is the author of the project of the the Spaso-Preobrazhensky Cathedral – in Tashkent, the mansion of Grand Duke Nikolai Konstantinovich Romanov, the Lutheran church and a number of other unique structures in Turkestan; artist Albert Benois.

The history of the appearance of the “German island” in the Khanate of Khiva, which grew up at the end of the nineteenth century, is also very interesting. The personal invitation extended by Konstantin von Kaufman, the Governor-General of the Turkestan Region, in the autumn of 1880, was the catalyst for the exodus of Mennonite Germans from the Crimea and the Volga region.

For 71 families (420 people) of Mennonites, Turkestan was supposed to become a new home, however, Kaufman’s sudden death (1882) changed their fate. As a result, one part of the sectarians decided to stay in Turkestan, and the other, in the number of 30 most affluent families, to seek asylum from the Khan of Khiva, Said Muhammad Rahim. Thus, the first families of the approximately 200-person German-Mennonite ethno-confessional community (30 families) appeared in Southern Khorezm between 1881 and 1883.

Subsequently, the Mennonites were allocated land with an area of about 50 hectares in the village of Ak-mosque (15 km east of Khiva), gradually the composition of the colony grew and by 1904 amounted to 62 farms. The settlers had their own school and cemetery.

Mennonite Germans also participated in the cultural life of the Khanate of Khiva. The Nurullabay palace complex was built at the beginning of the twentieth century by order of the Khan of Khiva Asfandiyar, with the participation of Mennonite masters and the architect Alexander Ropp (Alexander Voldemar) invited from Moscow. The Europeanized ceremonial pavilion of official receptions of Asfandiyarkhan is a maze of seven rooms.

Researchers say that the architecture and interior design combine elements of the classical Empire style from the XVII–XVIII centuries of Western European art with elements of the ancient Khorezm style.

Under the leadership of Alexander Ropp, with the participation of Mennonite Germans, two more European-style buildings were built in Khiva: a post office (1910) and a hospital (1911-1913).

Thus, even a brief historical review clearly shows that the relations between the Central Asian and European peoples have quite deep roots, and, moreover, covering a wide range of directions: from cultural and humanitarian to commercial and political.

These historical ties will undoubtedly find their logical continuation and will serve as an additional natural factor in building constructive cooperation between the countries of Central Asia and Europe. ///nCa, 31 October 2022 (in cooperation with Embassy of Uzbekistan in Turkmenistan)