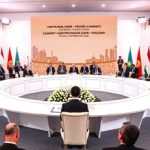 nCa Report On 14 October 2022, Astana hosted the first summit with the participation of the leaders of Russia and Central Asian countries. The meeting, initiated by Moscow, coincided with the 30th anniversary of the establishment of diplomatic relations between Russia and the five Central Asian states. The agenda of the summit included such issues […]