Home » Shared positions of Turkmenistan and Russia in Afghanistan

“Turkmenistan has always pursued a wise policy in Afghanistan, relying on its neutral status,” said Ambassador Blokhin of Russia during a media briefing in Ashgabat on 24 December 2021. 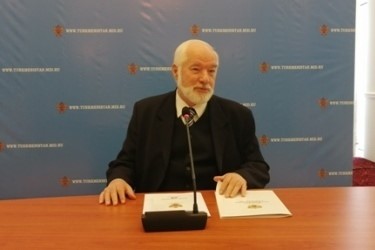 He noted that Turkmenistan has always provided assistance to Afghanistan, regardless of which government was in the country. “This is probably the right approach, because the people suffer first of all from all economic and political problems. Therefore, what Turkmenistan is doing is necessary and useful for the Afghan people,” he added.

“Any government is interested in maintaining relations with those who help the country,” Blokhin said.

The Ambassador also pointed out that regarding approaches to Afghanistan, Russia and Turkmenistan have many similarities. “Because we also stand for stability in Afghanistan, we are in favor of providing humanitarian assistance to the Afghan people,” he said.

Blokhin cited Moscow’s official stance that “those countries that were present there, as a result of which we have what we have today, should also make a decisive financial contribution.”

The Ambassador drew attention to the fact that “it is quite difficult to feed 36 million people with humanitarian aid.” In this regard, Russia and Turkmenistan share similar position – “we need to do everything to develop the economy in Afghanistan so that the people feed themselves, and for this the government should work effectively”.

“Today there are problems with the effectiveness of the government performance (in Afghanistan), but the main thing is that today the funds that were intended for Afghanistan are blocked in American banks. And of course, if these funds remain frozen, then there will be a lot of other problems, so the government can do little without money,” he added.

The Ambassador highly appreciated Turkmenistan’s efforts to implement economic projects in Turkmenistan, mentioning the TAP and TAPI energy projects. The main issue is that funds that could be by the Afghan side to build a gas pipeline or a power line are still blocked.

“It is difficult to implement anything without money, and Turkmenistan’s approaches are absolutely adequate and largely correspond to Russia’s approaches,” Blokhin summed up. /// nCa, 27 December 2021