Home » Beware Central Asia – Social media is already a deadly battlefield, with no rules of war 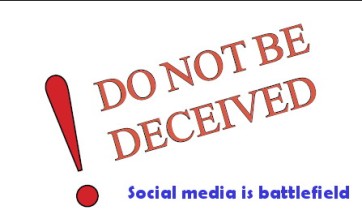 “It’s an odd world we live in—one where people view the world through a mobile device, a lens that has created a new landscape where official news, news stations, newspapers, and the like, have been replaced by instantaneous information free from vetting, researching, and journalistic standards that were once the foundation of our decision-making processes.” —– This is the opening paragraph of an article titled ‘Weapons of Mass Deception – Social Media and its Role in the War on the Global Social Landscape,’ written by Jason Norman for Attego.

Paul J Payack and Edward M Peters, writing for The Hill, assert, “Social media is adhering to its etymological roots more tightly than one might expect. The word “social” ultimately derives from “secg,” an Old English word for “warrior.” The social media “warrior” now understands that the role of social media is not a fad but a mechanism to better understand socio-economic trends and issues – in real time.” Their article was aptly titled ‘Social media as a strategic weapon.’

An article by John Haltiwanger at Elite Daily makes a convincing case that the social media has become the ‘greatest weapon in war and politics’ by citing several examples where the social media actually served as a powerful weapon. It is noteworthy that his article was published in October 2014, when we were still a comfortable distance away from the Trump phenomenon.

The latest example of the use of social media as a weapon of war is the deceiving portrayal of the Turkish action in northwestern Syria to uproot a cluster of terrorist groups.

The Turkish Armed Forces launched the ‘Operation Olive Branch’ on 20 January 2018 in the Afrin region of Syria to repel and eliminate the terrorists of PKK/KCK/PYD-YPG and DAESH. As the operation is moving step by step to its logical success, the social media is ablaze with false and fabricated information, claiming damages to the civilian population.

The Turkish government has issued a brochure to expose the dishonesty. Here are some examples:

Example 1: The photo of three children shared on January 29, 2018, with the hashtag #StopAfrinGenocide, belongs to a news article that was posted on the Milliyet Blog site on October 18, 2015, with the title “Children are dying, hopes are fading.” 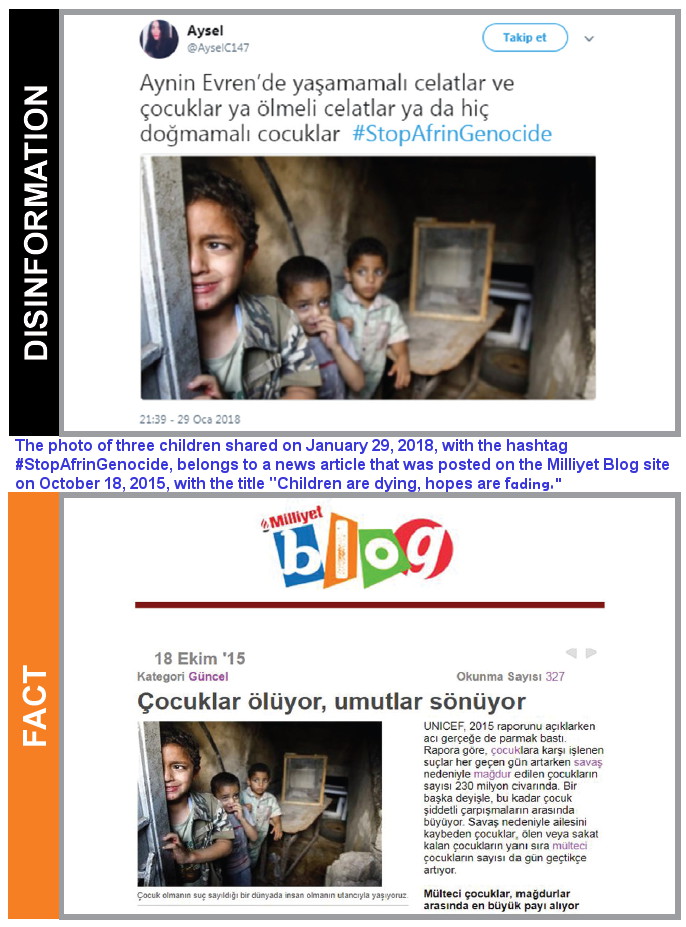 Example 2: The image of a child on a stretcher claimed to be one of the 8 civilians wounded during Operation Olive Branch in Afrin was actually taken during the attack of the US-backed Syrian Democratic Forces on August 29, 2017 in the city of Marea, north of Syria and shared on various social media accounts on the same date. 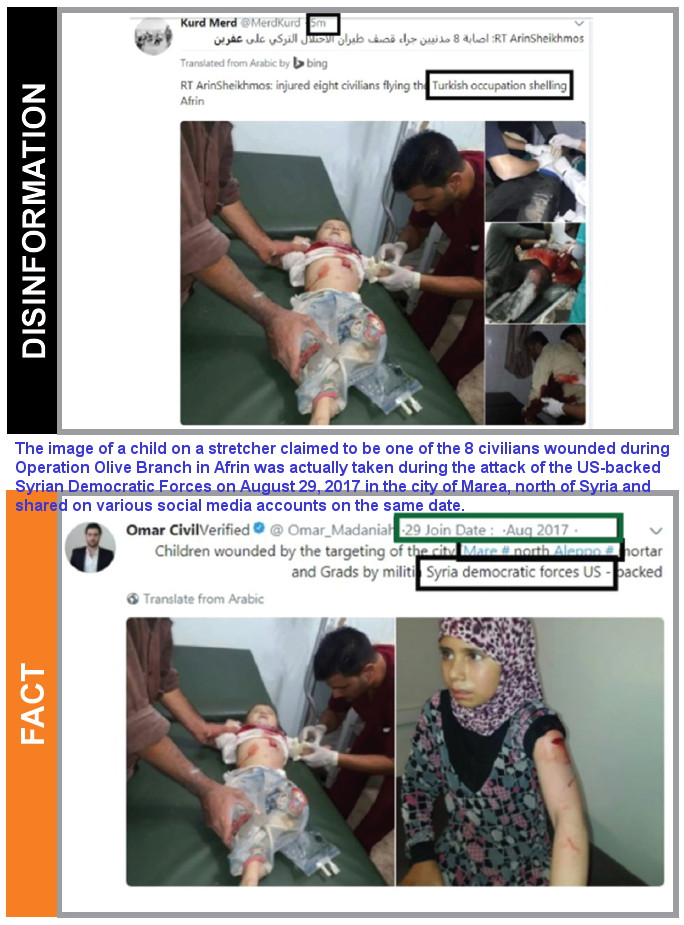 Example 3: The photo of an injured child who was allegedly wounded in Afrin during the air operation conducted by the Turkish Armed Forces in Afrin was actually used by BBC in a news report dated March 12, 2015 with the title “Syrian Crisis: the UN Security Council failing victims.” 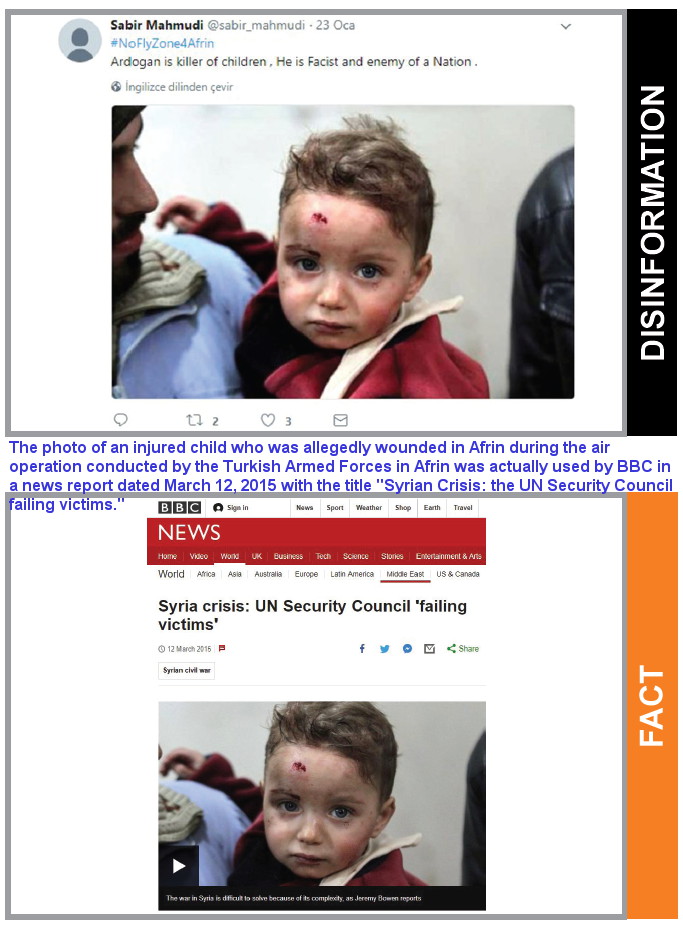 Example 4: The social media claims of the photo of a wounded mother and her two children taken in Afrin is actually an image from Al Jazeera’s news video titled “Death toll rises in Syria bombing raid” which was published on December 16, 2013. The video was shot in Aleppo not in Afrin. 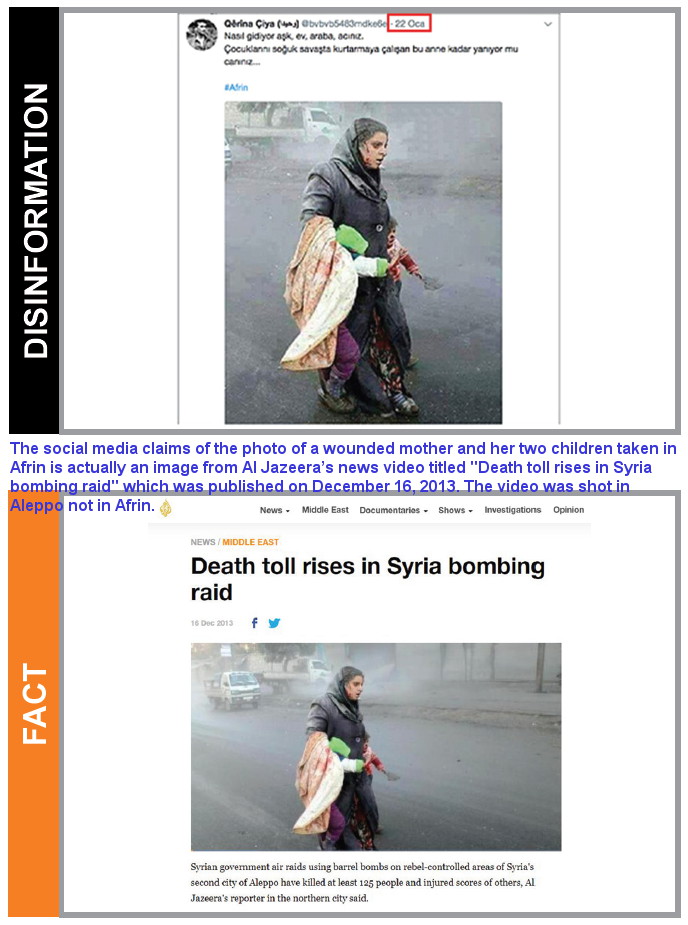 Example 5: The picture of the injured child shared with the hashtag “Save Afrin” from various social media accounts in order to defame the Operation Olive Branch was actually the photograph of Abd Doumany who won the first prize in Anadolu Agency’s “AA Istanbul Photo Awards” photo competition held in 2016. The photograph was not taken in Afrin but in Aleppo on July 2016. 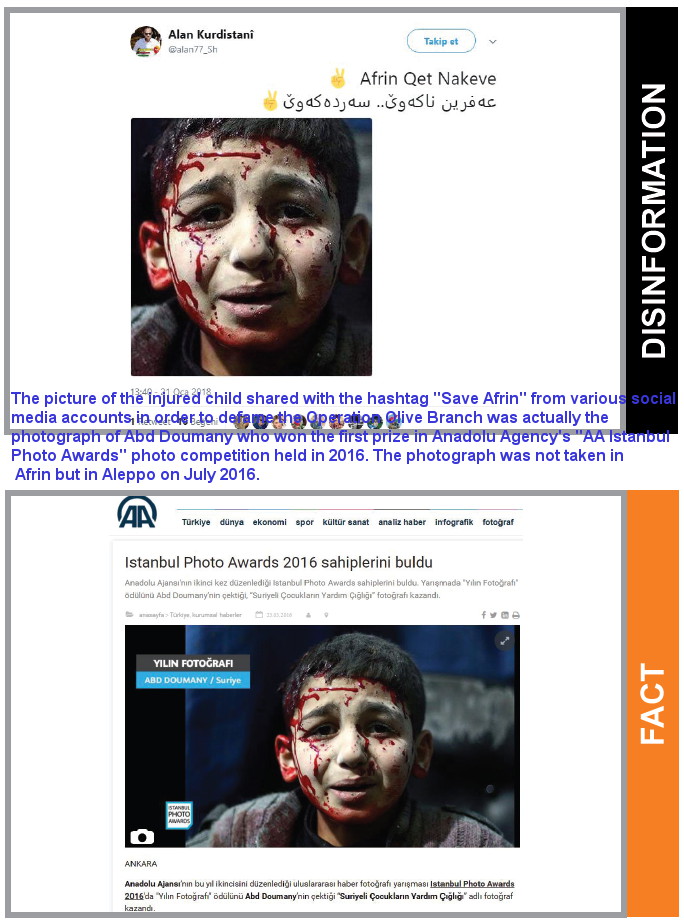 Example 6: The photo of a crying child claimed to be taken in Afrin shared on social media by supporters of the terrorist organization with the hashtag “#stopAfrinGenocide” was actually shared on Twitter in 2015 with the hashtag “#Pray4Syria” in order to draw attention to the Syrian civil war. 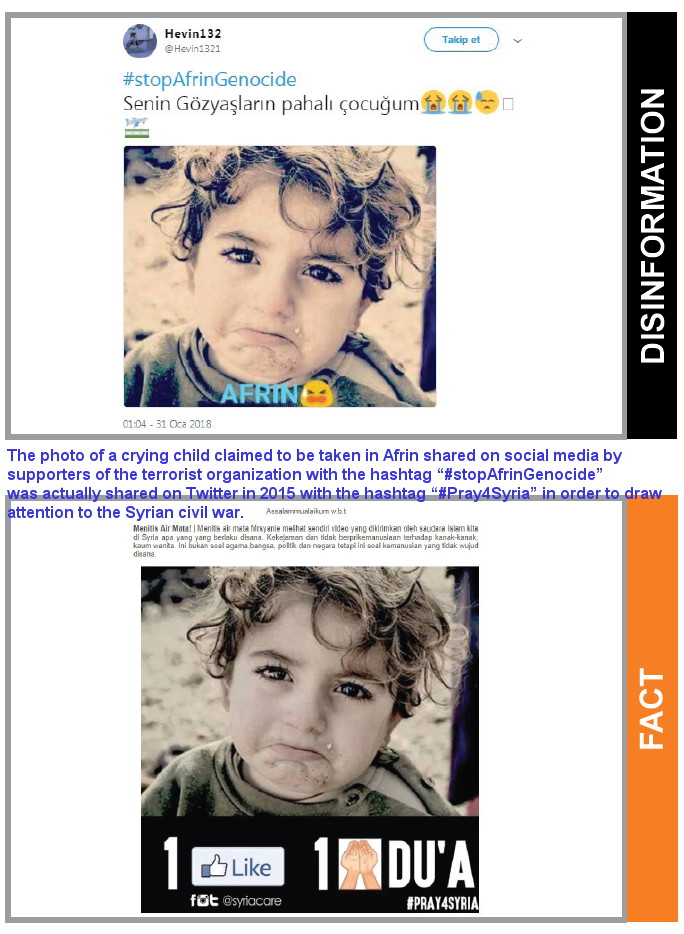 Example 7: The alleged photo of children in Afrin fearing the sound of jets belonging to Turkish Armed Forces was actually taken from the report of France 24 journalist Hisham Al-Omeisy with the title “From caves to water canals, shelters of Yemenites against bombs” and dated May 18, 2015. 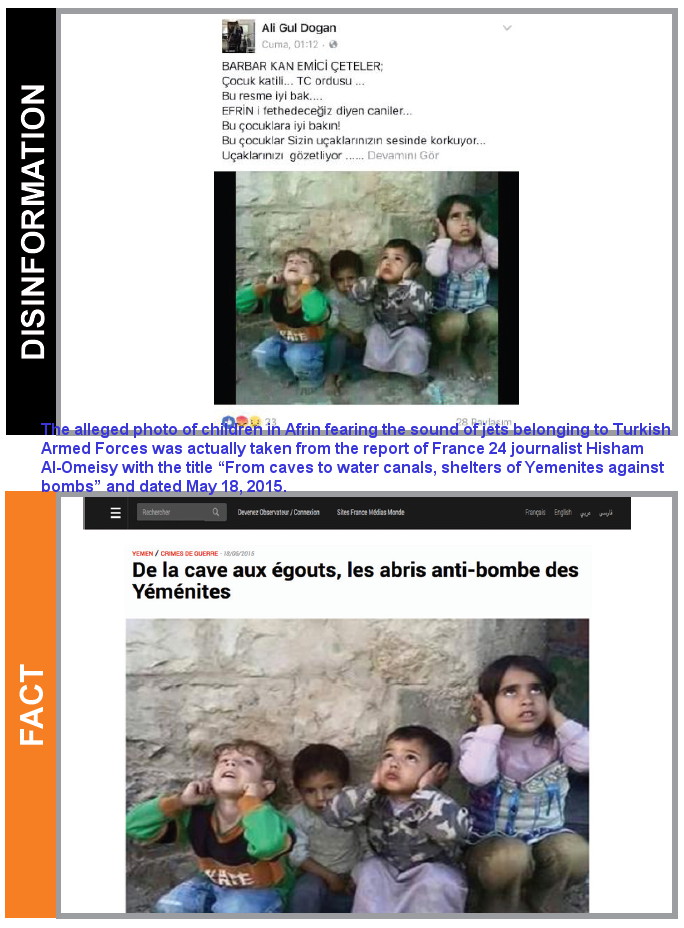 The complete brochure, titled ‘Disinformation Campaigns Against Operation Olive Branch Carried Out by Members of Terrorist Organization and its Supporters on Social Media’ is available here:

Facts speak for themselves.

Central Asia, in the crosshairs of Trump and his allies, needs to take some steps to prevent any damage from social media as a weapon of mass deception.

Here are some suggestions:

In a world where perceptions are traded as realities, Central Asia needs to put its act together real fast. The best thing would be to formulate a joint strategy and build robust presence on the social media. /// nCa, 19 February 2018