Acronyms cannot usually tell a story, at least not in the case of BOMCA and CADAP. Anyone outside this region would be hard-pressed to make any sense of these acronyms that sound almost like real words. Nevertheless, this is an ongoing story: Cosimo and Ernest can tell it.

First, a few words about BOMCA and CADAP.

BOMCA is EU-funded Border Management Programme in Central Asia. With long standing record of accomplishment, BOMCA is currently in its 10th phase with a budget of Euro 21.65 million. Representing the spirit of EU-Central Asia cooperation, BOMCA continues to support cross-border cooperation and improve the living conditions of people living in the border regions of Central Asia, while also facilitating legal trade flows across borders. The approach is panoramic and comprehensive.

CADAP is Central Asia Drug Action Programme, also funded by the EU. It is in its 7th phase, with a budget of Euro 6.8 million. The focus is on implementing the strategies and measures to reduce the demand for drugs, promoting prevention initiatives and improving the treatment offered by public institutions to drug users in the region. 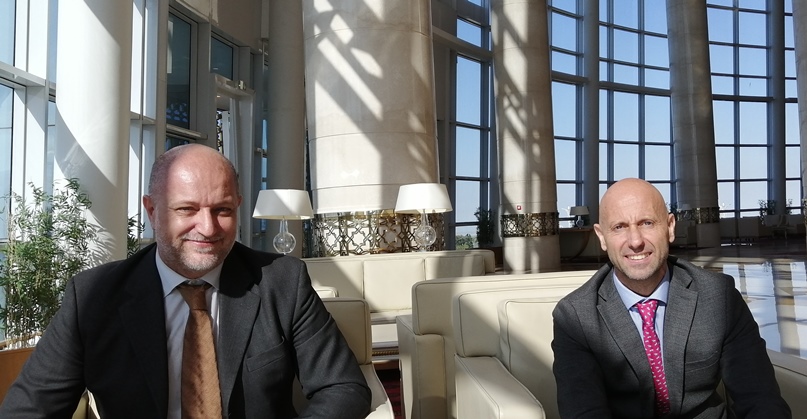 Cosimo LAMBERTI FOSSATI is attaché at the EU Delegation in the Kyrgyz Republic. As project manager, he oversees region-wide activities of BOMCA and CADAP.

Ernest Robello is the director of CADAP phase 7. Also based in the Kyrgyz Republic, he is originally from the International and Ibero-American Foundation for Administration and Public Policies (FIIAPP), a public sector foundation under the Spanish state and a member institution of Cooperación Española, the Spanish government cooperation agency.

nCa had a conversation with Cosimo and Ernest in Ashgabat on Wednesday, 16 November 2022.

The focus was on the current and emerging challenges likely facing BOMCA and CADAP in 2023.

Cosimo, pointing out the distinction between the external and internal borders of Central Asia, said that after the takeover of Afghanistan by the Taliban last year now the situation is much more difficult. There is the issue of border management, as countries don’t recognize the Taliban.

There is also some tension arising in the region; specifically the Tajikistan-Kyrgyzstan border issue, said Cosimo.

He added that the situation in Ukraine has economic aspects. Perhaps this has not affected Turkmenistan much, but this is an issue. Cosimo said that Turkmenistan is shielded compared to other countries in the region so there is nothing dramatic.

Panning back, Cosimo said that there is the need for integration because some of the challenges are regional challenges. There has been good cooperation and regular participation from the Turkmen side.

There is also the global economic crisis and we cannot do much about it, he opined.

Cosimo said that as far as specific issues in 2023 are concerned, one area is border delimitation among some countries in the region, such as between Kyrgyzstan and Uzbekistan. Here we would like to showcase the very good example of how Turkmenistan and Kazakhstan have sorted out through the BOMCA project.

On the external border side, there is the border with Afghanistan. This is not a problem with Turkmenistan or Uzbekistan but it is a problem with Tajikistan. The border there is closed. The countries need to come together and form a common approach, he said.

We do not bring solutions from Europe and ask the countries to implement them. The countries interact on consultation, said Cosimo.

On the issue of drugs, there is some lack of data because of the Covid disruptions when the entire focus during that time was on the pandemic. There is now the need to gather the data to see how the things have change, how the things have moved, he said.

Because of the proximity with Afghanistan, the region is known for heroin use and narcotic substances. There are two different aspects, he said, the law enforcement and the treatment of addicts. With our European experience, we can help in some ways such as revision of the legislation.

Ernest of CADAP voiced his point of view. He said that we have to assess the patterns and see as to how Covid has affected them. The higher production of methamphetamine substance in Afghanistan is affecting the Central Asia markets. It is different from heroin. Also, there are new psychotropic substances.

EU expertise can provide very strong input on that, Ernest said. Speaking of methamphetamine abuse, he said that Europe has strong experience in dealing with this problem whereas the experts in the region are more familiar with the heroin and alcohol abuse. This is new area for them. The stimulants are new in the region and this calls for new methods for dealing with the issue, said Ernest. This includes both prevention and treatment. It is also very important to build data and improve the legislation.

He said that it is very important to underline that there is no need of vast territory to cultivate such drugs. They can be elaborated in a small kitchen or a small van.

Ernest, without naming any countries, said that some of the drugs are being sold online and through the social media. This is something that has to be tackled, especially among the youth.

I would also like to mention the misuse of the prescription drugs, particularly among the youth. This is something where CADAP is ready to provide support, he said. Some countries in Central Asia have already requested specific support in this regard.

Expanding further on the issue, Ernest said that some painkillers are being used; the eye drops are being used for inhaling and for recreational purposes. This is because of psychotropic component in them. They are clearly misused and there are harms associated with such abuse.

About the trading of drugs through the social media, Ernest said that some data has been provided by our colleagues in the region.

Misuse of prescription medicines is an interesting phenomenon because these are legal substances and some people have to have them for medical reasons. This needs good discussion in each country and the review of the legislation, said Ernest. The European practices such as the sale of such medicines strictly on the recommendation of the doctor and the limitation on the quantity that can be purchased are useful in dealing with this issue. The idea is not to ban these medicines because some of them are life-saving drugs. There is the need to take measures to prevent their misuse.

Cosimo picked the conversation again. He said that the shape of economy, particularly the crisis in Ukraine was affecting the prospects of migrant workers sending back home remittances from regional countries, mainly Russia. This connects with drug trafficking.

He informed the new package there is much more bilateral content with Turkmenistan. Modalities will be decided by discussion with our counterparts, he said.

Both Cosimo and Ernest were confident that the EU and the regional countries would be able to meet the challenges likely to arise next year.

The grasp of Cosimo and Ernest on their areas of responsibility, and their confidence in the ability of BOMCA-CADAP and their regional partners in dealing with the new and emerging challenges speaks volumes of the success of these EU-funded projects.

The success of BOMCA-CADAP is the success of optimism and cooperation. This story needs to be replicated in every area. /// nCa, 17 November 2022