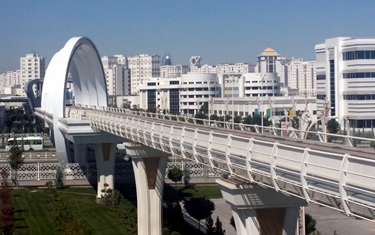 The energy efficiency of residential areas as a factor of sustainable development of the urban environment was recently discussed during an interdepartmental meeting, which was attended by specialists of the city administrations of Ashgabat and Turkmenbashi, hotel business, engineers of the Architectural Design Institute “Turkmen state project” (Turkmendowlettaslama), teachers of the State Energy Institute (Mary), the newspaper “Neutral Turkmenistan” reports.

The economical consumption of energy resources, primarily natural gas, as well as electricity, water and heat while maintaining the level of comfort for everyday life and work is one of the tasks of the National Energy Saving Program for the period 2018-2024.

Several various energy-efficiency solutions were presented at the UNDP-sponsored meeting. A thermal imager, for example, can assist in detecting the external areas of the house where heat leakage occurs. Designers and engineers became acquainted with the new layout of street lighting poles by using cost-effective and powerful lamps.

Specific energy-efficient measures are being implemented not only in the urban environment, but also in the resort area of Avaza, located on the Caspian coast.

According to the deputy director of the Hasyl Hotel, Ashirdurdy Gurbanalyev, with the support of the Sustainable Cities project, implemented jointly with UNDP, more than 3,000 11-watt lamps will be replaced with energy-efficient 4-watt lamps by the end of the year.

Along with technical issues, standards of “green” certification of hotel business facilities are being developed on the basis of the energy survey.

Director of the Research and Production Center “Renewable Energy Sources” at the State Energy Institute (Mary), Candidate of Technical Sciences Kakageldi Saryev told about the project of an economic zone under-construction on the shores of the Turkmen lake “Altyn asyr”. Combined solar and wind power plants with a total capacity of 10 MW will be used in this modern socio-economic cluster.

The Center also developed proposals for innovative electrification of 14 settlements and several special facilities of the State Border Service, calculations and selection of components with a total capacity of 6.2 MW were made.

This approach to electricity supply may be used in the future in remote mountainous or desert areas, oil and gas exploration sites, geologist and botanist camps, and road construction sites.

In accordance with the National Strategy for the Development of Renewable Energy until 2030, in cooperation with the Sustainable Cities project, more than 20 modern LED energy-efficient street lighting elements, 12 non-volatile lamps, automatic control systems, as well as “smart” networks equipment have been installed on the territory of the university and the Center. The plans include the installation of so–called LED lights for non-volatile supports and video surveillance of their condition during operation.

Waste recycling is part of the integrated process of ensuring the sustainable development of the urban environment. Separate garbage collection is practiced in Ashgabat, according to project specialist Jemal Durdykova, for example, bread and melon residues, which neat citizens leave in separate boxes near waste containers, but plastic, glass, paper, and metal cans from drinks can be sorted at the initial level.

“The Sustainable Cities project team is also actively engaged in waste collection. At the moment, 90 tons of plastic, 25 tons of waste paper, and 15 tons of glass have been collected; two vehicles have been purchased for the collection and transportation of such waste, and they have been donated to the Nature Protection Society, which is acting as the operator of collecting plastic waste from the population in exchange for seedlings and sending it for processing”, the expert said.

The project of the UNDP and the Ministry of Agriculture and Environmental Protection of Turkmenistan “Sustainable Cities in Turkmenistan: Integrated Green Urban Development in Ashgabat and Avaza” promotes cooperation between government agencies, and also supports the efforts of the government, the private sector and public organizations in the areas of energy efficiency development, renewable energy, monitoring of environmental components of cities, waste management in megapolis, the introduction of green practices in public buildings. ///nCa, 9 November 2022