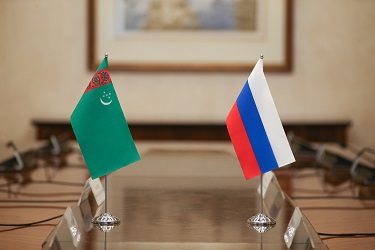 During the exchange of views, the parties commended the level of bilateral cooperation between Russia and Turkmenistan, achieved over 30 years after the establishment of diplomatic relations. The importance of further building up friendly ties between the countries in various fields was emphasized, including between the foreign ministries.

The parties also shared their assessments of the situation in various regions in the post-Soviet space, including in Central Asia and the Caspian region. It was decided to continue a regular dialogue between the foreign ministries of the two countries in the spirit of friendship and strategic partnership. ///MFA Russia

The trade turnover between Russia and Turkmenistan in January 2022 grew by 76.6% year-on-year and reached US $ 52.2 million. The statement came from Deputy Minister of Economic Development Dmitry Volvach at a meeting of co-chairs of the Russian-Turkmen Intergovernmental Commission on Economic Cooperation.

According to Volvach, Turkmenistan and Russia have “prospects for the development of mutual supplies: food and textile products from Turkmenistan, oil and gas equipment, engineering products from Russia, including for the implementation of infrastructure projects.”

In turn, the Turkmen side expressed interest in participating in the Agroexpress logistics project, which provides for accelerated food supplies.  The project involves Uzbekistan, Kazakhstan and Azerbaijan.

The governor of the Chelyabinsk Region Alexei Teksler visited Ashgabat as part of a large Russian delegation.

The Russian delegation held meetings in various ministries and departments of Turkmenistan. Cooperation in trade and cargo transportation, energy, construction, as well as the need to strengthen business ties and cultural contacts were discussed.

The head of the Chelyabinsk region presented proposals, aimed at promoting business contacts with Turkmenistan. He noted that the Chelyabinsk region is one of the world-known metallurgical and machine-building centers. Moreover, the region is a leader in terms of agricultural production and output of gas industry products ranging from exploration and field development equipment to engineering and oilfield services.

The Chelyabinsk region can supply to Turkmenistan:

According to Teksler, the Chelyabinsk region is ready to act as a contractor for the design, equipment selection for any industrial enterprise, as well as metallurgical plant in Turkmenistan.

“We are interested in expanding ties along the transport corridor within the framework of the North-South project,” said the Governor of the Chelyabinsk Region.

Taking into account the great interest of Chelyabinsk companies in cooperation with Turkmen partners, Teksler asked to coordinate the visit of the business delegation of the Chelyabinsk region to Turkmenistan.

During his visit to Ashgabat, the governor met with DPM Charymyrat Purchekov (energy, industry, construction). The construction of a metallurgical plant, supply of equipment for the construction of a ring power transmission line in Turkmenistan, as well as the possibility of supplying pipes for the public sector were discussed at the meeting.

The parties discussed the supply of construction and oil and gas equipment, as well as pipe products, during a meeting with DPM Shahym Abdrakhmanov (oil and gas). /// nCa, 12 April 2022