It will be built in the Serdar district of Balkan province, serving the residential and other facilities along the shoreline of the Altyn Asyr lake, the second largest manmade lake in the world.

In the contract assigned by the ministry of energy, the Turkish company will also lay the 110kV power line from the Serdar substation.

The tenders for the project were floated in June 2021.

Funding to the tune of USD 25 million will come from the loan provided by the Abu Dhabi Development Fund. The loan was provided to the State Bank for Foreign Economic Affairs for 15 years with a grace period of 3 years at 4% per annum.

According to a presidential decree, the Ministry of Energy of the country concluded an internal Credit Agreement with the State Bank for Foreign Economic Affairs for a period of up to 15 years with a grace period of 3 years at 4.5% per annum.

Solar and Wind Potential of Turkmenistan

A graphic from a UNDP document:

Dr. Seitgeldiev N., Director of the Solar Energy Institute under the Academy of Sciences of Turkmenistan presented an informative paper at a conference in Baku in 2018.

Here are the relevant passages from the paper, describing the wind and solar energy potential of Turkmenistan:

Sun and wind are the most prospective renewable energy sources. The natural and climatic conditions of Turkmenistan are extremely favourable for wide use of renewable energy. The duration of sun shining in Turkmenistan is 2,768-3,081 hours per annum, almost all year round. At the same time, the wind speed in the Caspian zone is enough for the all-year stable work of wind plants.

There are about 300 bright days per annum; in the vast territory of the country, the average annual intensity of solar radiation is about 700-800 W/m2, which is equal to energy supply of 2,000 kWh/m2 per annum to one square metre of the earth surface.

The annual energy potential of solar energy is estimated at the level of 110 billion tonnes of equivalent fuel. The distribution of the energy potential of solar energy in the territory of Turkmenistan can be considered even owing to its latitudinal position. However, when designing solar heating systems it is necessary to take into consideration the temperature regime of the place of location of renewable energy objects. Due to low outside temperatures in winter, especially in the Dashoguz velayat ( up to 20-28° С below zero) big heat losses, which can reduce the efficiency of solar heating plants, will take place.

Turkmenistan is characterised by a great potential of using wind energy (640 billion kW-hr per annum).

Up to 40% of the country’s territory are favourable for using wind energy. The western and north-western regions (including the Caspian zone) where the wind speed of more than 4 m/s prevail are most favourable for wind energy development.

In the northern Caspian coastal zone the specific power of air flow is comparatively great, about 110-135 W/m2 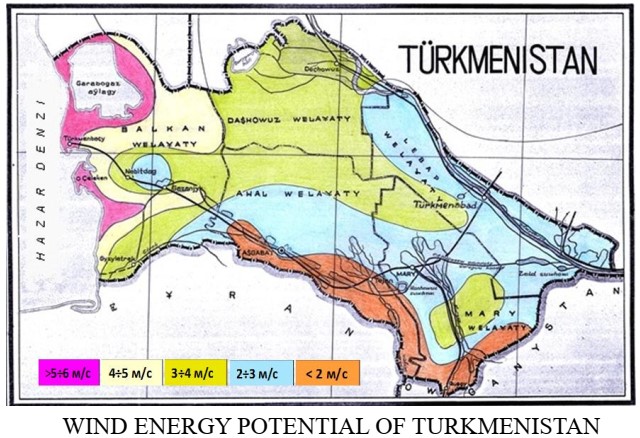 The map was drawn in 2009-2010 and reflected the enlarged regionalisation by the prevailing average annual wind speed.

The map allows estimating as a rough approximation the wind energy sources in different parts of Turkmenistan and developing a necessary complex of wind energy activities.

The high level of the wind energy potential is characteristic of the Balkhan-Kopetdag corridor, more than 150 W/m2.

In the central region up to the northern border the specific power of wind not more than 100 W/ m2 prevails.

As a whole, the wind energy potential can be estimated at 5.5 billion tonnes of equivalent fuel per annum.

Here is a graphic from IRENA (International Renewable Energy Agency):