You are here: Home / Ask Saeedi / Visit of Turkmen FM to Afghanistan

This was the first visit by the foreign minister of Turkmenistan after the Taliban came to power. 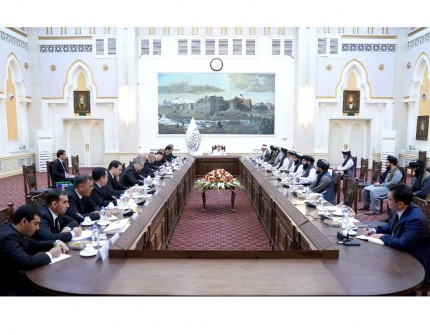 During the meeting the two sides discussed bilateral relations, humanitarian assistance, economic and transit cooperation and the international engagement with Afghanistan.

The agenda of the talks included the prospects of realization of joint projects, including TAPI project, fiber optic and railway projects.

On October 30, 2021, in accordance with the instructions of the President of Turkmenistan, a Turkmen delegation headed by the Deputy Chairman of the Cabinet of Ministers, Minister of Foreign Affairs of Turkmenistan Rashid Meredov is on a working visit to Afghanistan.

Today, on October 30, the Deputy Chairman of the Cabinet of Ministers, Minister of Foreign Affairs of Turkmenistan Rashid Meredov had a meeting with the Chairman of the Government of Afghanistan Mohammad Hasan Ahund.

During the meeting R.Meredov underlined that Turkmenistan, as neighboring state is deeply interested in political stability and security of the afghan people, resolving contradictions by peaceful, political-diplomatic means. In addition, the Minister noted that Turkmen side expresses its readiness to close cooperation and constructive dialogue with the new state structures of Afghanistan.

During the constructive conversation, the ministers reviewed the priority issues of the bilateral agenda in the political and diplomatic, trade and economic, cultural and humanitarian cooperation. The sides expressed the expediency of stepping up the dialogue between the official and business circles of the two countries in order to build up the potential for multifaceted interaction.

The parties stressed the necessity of further intensifying bilateral and multilateral contacts aimed at effective implementation of major energy, communications and transport projects with the participation of Afghanistan.

The Turkmen side reiterated that Turkmenistan, as a direct neighboring country, is deeply interested in the political stability and security of Afghanistan, and the well-being and unity of the Afghan people. ///MFA Turkmenistan, 31 October

Muttaqi said they talked about the Turkmenistan-Afghanistan-Pakistan-India (TAPI) gas pipeline project, adding the implementation of the project in Afghanistan will start soon.

“Important issues such as TAPI, railroads and electricity were discussed. We discussed how to strengthen the projects that had already started.

Also, the projects that were started by Turkmenistan, such as TAPI–its practical implementation will start soon in Afghanistan.”

Muttaqi said Meredov has invited him to visit Turkmenistan.

The TAPI project was launched in 2016.

TAPI pipeline is expected to carry 33 billion cubic meters (bcm) of natural gas each year along a route stretching 1,800 km (1,125 miles) from Galkynysh, the world’s second-biggest gas field, to the Indian city of Fazilka near the Pakistan border.

However, the construction has faced delays in Afghanistan due to insecurity, among other issues, in the past years.///ToloNews, 31 Oct

Yaqoob, the son of the Taliban’s founding leader, Mullah Omar, made the comment following a meeting with Turkmenistan’s Foreign Minister Rashid Meredov, who arrived in Kabul in the morning for talks on the project and bilateral relations with Afghanistan.

“I am directly responsible for and overseeing the security of the TAPI project. We will not hesitate to make any sacrifices for the implementation of this national project,” Yaqoob tweeted after meeting with Turkmenistan’s top diplomat at the presidential palace in the capital.///Anadolu Agency, 30 Oct (abridged) — Complied by nCa, 1 November 2021