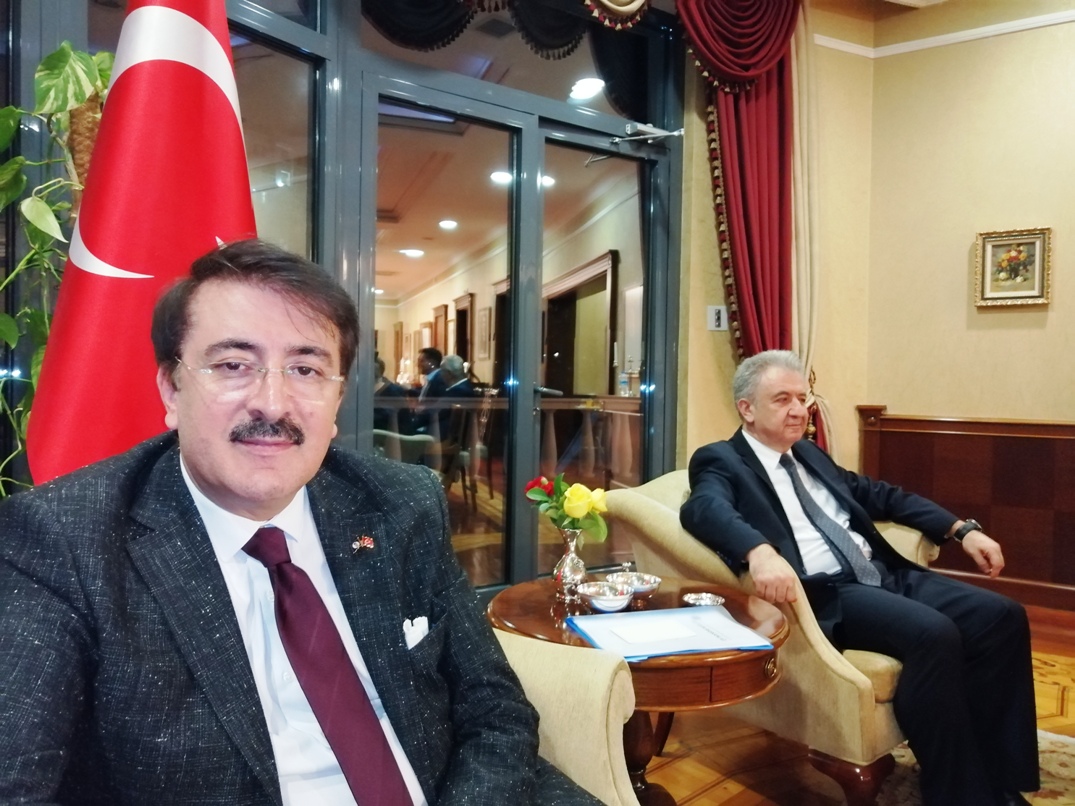 Candid views on relations with Turkmenistan, situation at Turkish-Syria border

Turkey is determined to steer the situation at the Turkish-Syrian border to its logical conclusion, and has the full capacity to do so.

This was said by Ibrahim Aydemir, AK Party’s Erzurum MP, the Co-Chairman of the Turkish-Turkmen Joint Parliamentary Friendship Group and member of the Plan and Budget Commission of the Turkish Parliament, in an exclusive conversation with nCa on 19 October, Saturday.

Aydemir also praised the thriving relations with Turkmenistan and expressed the confidence that it can be cemented further.

Here is the summarized version of his conversation with nCa, lightly edited for clarity:

On relations with Turkmenistan

Our meeting continued for more than two hours, in which we discussed a wide range of issues and informed them about the situation in Turkey.

We talked of the Turkish-Turkmen relations and what can be done to strengthen and improve them further.

We also stressed the vitality of bilateral economic ties.

Moreover, we discussed cooperation on education. We proposed that we would like to have joint partnership in education.

We also underlined that we would like to extend our cooperation to other areas.

The Turkmen side welcomed us with open arms.

Every side, every aspect of Turkmenistan is beautiful.

Today (19 October 2019) we visited all the museums and important places in Ashgabat. I very much liked the horses, the carpet museum, and the national museum.

As the Turkish-Turkmen Joint Parliamentary Friendship Group, our aim is to further improve the bilateral relations to a new level.

Our visit was very fruitful. It made us very happy and when we return we will convey our impressions to Ankara.

We would also like to have Turkmen Parliamentary delegation in Turkey as soon as possible.

We expressed our gratitude to Turkmenistan for taking precautionary steps against the FETO terrorist organization.

We have done everything to contain and combat this terrorist organization.

I would like to underline that what the head of the Turkmen parliament said during the meeting was very sincere and forthcoming.

On the situation at Turkish-Syrian border

There is a destructive and lethal network in Syria.

We have 911 km of land border with Syria. The USA is trying to intervene from a distance of 11.000 km. The US intervention is not a solution. On the contrary, it is creating more problems and complicating the matter.

Because of this situation we have four million Syrians living as our guests in Turkey.

We would like to say that we want them to return to their homeland honourably. We would also like to make sure that they live in peace.

After our decision to intervene, the Turkish, Kurdish, and Turkmen population in Syria was very happy when they saw the Turkish soldiers.

Just in a few days we were able to take control of more than 1000 square kilometers of territory in Syria.

At this point the whole world is cognizant of our rightfulness.

It is not just Turkish or Turkmen. Any illegal organization that targets peace and the people, has to be neutralized.

Also, our president in his statement underlined the importance of countering and neutralizing these groups. We will continue our determination in combatting terrorism.

There will be some outcome within the five days. Either the terrorist groups will go away or we will pick up the operation where we left off. We will keep doing what we have been doing till all the terrorist groups are eliminated from the area. [President Erdoğan and Russian President Putin met at a bilateral Summit in Sochi on 22 October and adopted a Memorandum of Understanding (MoU) on the removal of PYD/YPG threat in Syria. Ed.]

The main problem is the elimination of terrorist groups and restoring peace and stability. This is what Russia, Iran, and Turkey want.

The 30-km wide security zone will be inside the Syrian territory. We don’t want any terrorist presence or activity within 30 km of our joint borders with Syria. We want to establish a secure and safe region. We want the Syrians to live in peace.

We have spent USD 40 billion for the Syrians living in Turkey. Although the EU pledged 6 billion Euros, so far they only contributed half of that amount.

According to the agreement we made with the USA [on 17 October 2019] the security zone will be managed by the Turkish armed forces.

In case of any situation that endangers peace in the security zone, the Turkish armed forces will take the necessary remedial measures.

Most importantly, we want to restore peace and to protect the territorial integrity of Syria.

Our main aim is to ensure that the Syrian people can live in peace and stability and to prevent the activities of terrorist organizations in the region.

The YPG is the military wing of the Democratic Union Party (PYD), a group that was spun out of the PKK in 2003. The PKK has waged war against the Turkish government for decades, leading both Washington and Ankara to designate it as a terrorist entity.

In February 2018, testifying to the U.S. Senate Intelligence Committee Congress, the Director of National Intelligence Daniel Coats, the top U.S. intelligence official, explicitly defined the YPG as the “PKK’s militia force in Syria”.

This clearly makes YPG a terrorist group, whether it is officially recognized as such or not.

In the joint Turkish-US statement on northeast Syria, it has been visibly acknowledged that Turkey has been forced to take action at its border because of very legitimate concerns. The statement, issued after the meeting between President Erdogan and Vice President Pence in Ankara on 17 October 2019, also recognizes the need for Turkey to establish a safe zone inside the Syrian territory and for the Turkish armed forces to manage the security zone.

Any obstruction by any country or organization in securing the safe zone will be an act of aggression against peace and stability.

We have reached an Either-Or point: If the security zone can be established along the Turkish border with Syria and the Syrian refugees can be successfully settled in it, this would be a blessing for the world in so many different ways.

If the Turkish attempt to create the security zone is thwarted by whatever means, it would be catastrophic, not just for the immediate neighbourhood but for the regions far and wide.

Everyone needs to make their decisions now and stand by those decisions. This is history in the making. It would not be blissful to be found on the wrong side of history.

Memorandum of Understanding Between Turkey and the Russian Federation