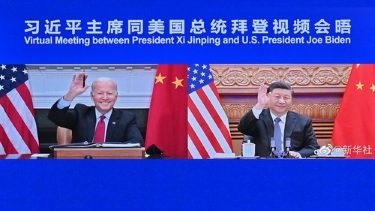 Right now, China-U.S. relations are at a critical historical juncture. The meeting between the two heads of state, which was “candid, constructive, substantive and productive,” covered issues of strategic, overarching and fundamental importance.

The two countries should learn to get along well in the new era, and Xi’s proposal of “three principles” — namely mutual respect, peaceful coexistence and win-win cooperation — is thought-provoking.

Equality and mutual respect are the preconditions for state-to-state relations.

While it is natural for China and the United States to have differences, the key is to manage them constructively. The world’s two largest economies should not only pursue coexistence, but also “peaceful coexistence,” and jointly hold the line of no conflict and no confrontation.

The significance of China-U.S. ties has gone far beyond the two countries, and has implications for the future of the world. During the meeting, the two heads of state both voiced opposition to the so-called “new Cold War,” which is a positive signal. It is hoped that the United States will implement the consensus and stop drawing ideological lines or forming various small cliques to suppress China.

With the interests of China and the United States deeply intertwined, it is important for the two countries to cooperate in a wide range of areas, including economy, energy, military-to-military cooperation, law-enforcement, education, science and technology, cyberspace, environmental protection and sub-national interactions, to deliver benefits to the people in the two countries and the world.

As Xi said during the meeting, “China-U.S. cooperation may not solve all problems, but few problems can be solved without China-U.S. cooperation.” The world has high expectations that the two countries will shoulder the responsibilities of major countries and lead the global response to address both urgent issues like COVID-19 response and outstanding challenges like climate change.

It is hoped that the two sides will implement the consensus of the two heads of state, look ahead and press forward, and move bilateral relations back on to the right track of sound and steady development. /// nCa, 19 November 2021 (cross post from Xinhua)