You are here: Home / Articles And Reports / Digital Currencies and Central Asia – Part 2

As to how does the blockchain technology work, here is an example from the useful guide published by Blockgeeks:

“The traditional way of sharing documents with collaboration is to send a Microsoft Word document to another recipient and ask them to make revisions to it. The problem with that scenario is that you need to wait until receiving a return copy before you can see or make other changes because you are locked out of editing it until the other person is done with it. That’s how databases work today. Two owners can’t be messing with the same record at once. That’s how banks maintain money balances and transfers; they briefly lock access (or decrease the balance) while they make a transfer, then update the other side, then re-open access (or update again). With Google Docs (or Google Sheets), both parties have access to the same document at the same time, and the single version of that document is always visible to both of them. It is like a shared ledger, but it is a shared document. The distributed part comes into play when sharing involves a number of people.

“Imagine the number of legal documents that should be used that way. Instead of passing them to each other, losing track of versions, and not being in sync with the other version, why can’t *all* business documents become shared instead of transferred back and forth? So many types of legal contracts would be ideal for that kind of workflow. You don’t need a blockchain to share documents, but the shared documents analogy is a powerful one.” – William Mougayar, Venture advisor, 4x entrepreneur, marketer, strategist, and blockchain specialist

The Three Pillars of Blockchain Technology

The three main properties of Blockchain Technology which have helped it gain widespread acclaim are as follows:

For anyone trying to gain insight into the blockchain technology and how it works, the starting point would be the Guide compiled and published by Blockgeeks:

What is Blockchain Technology? A Step-by-Step Guide For Beginners – by Ameer Rosic

The Peer-to-Peer (P2P) systems gained popularity in 1999 with the file sharing structure of Napster, a site primarily meant for exchanging music.

The blockchain technology needs P2P environment for its functionality. 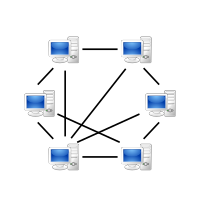 The P2P computing or networking is a distributed application architecture that partitions tasks or workloads between peers. Peers are equally privileged, equipotent participants in the application. They are said to form a peer-to-peer network of nodes. 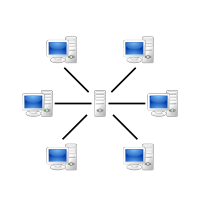 Peers make a portion of their resources, such as processing power, disk storage or network bandwidth, directly available to other network participants, without the need for central coordination by servers or stable hosts. Peers are both suppliers and consumers of resources, in contrast to the traditional client-server model in which the consumption and supply of resources is divided. 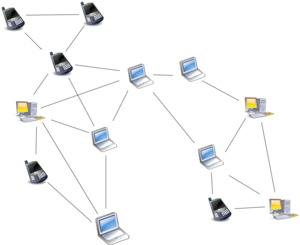 Overlay network diagram for an unstructured P2P network, illustrating the ad hoc nature of the connections between nodes

Emerging collaborative P2P systems are going beyond the era of peers doing similar things while sharing resources, and are looking for diverse peers that can bring in unique resources and capabilities to a virtual community thereby empowering it to engage in greater tasks beyond those that can be accomplished by individual peers, yet that are beneficial to all the peers.

A P2P network can be both structured and unstructured.

The information and graphics in this part of the report are taken from the Wikipedia entry Peer-to-Peer – https://en.wikipedia.org/wiki/Peer-to-peer These are just some of the uses of P2P networking, and the possibilities are expanding with each passing day.