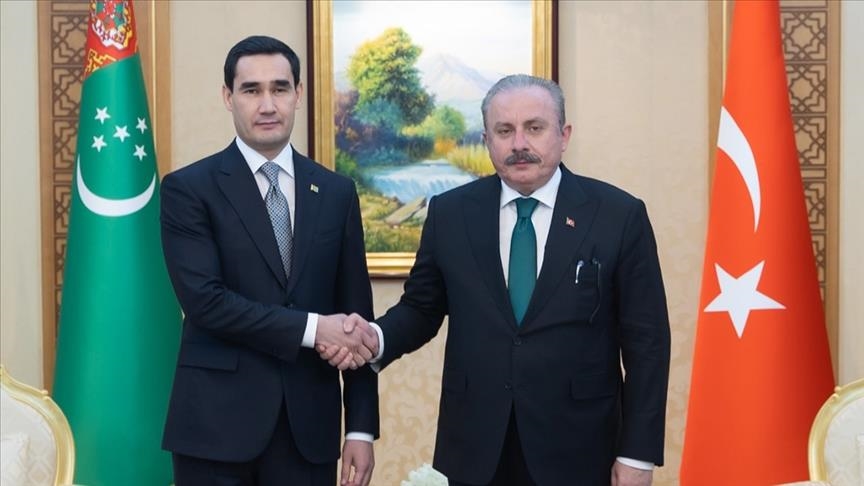 Türkiye is ready to transit the Turkmen natural gas supplies to Europe. This was stated by the Speaker of the Turkish Parliament Mustafa Şentop at the meeting with President Serdar Berdimuhamedov on Friday, 18 November in Ashgabat.

The Chairman of the Grand National Assembly of Türkiye called partnership in overcoming the energy shortage experienced in the world recently one of the promising areas of cooperation.

“All relevant organizations are ready to work together, especially for the transportation of Turkmenistan’s natural gas to Türkiye and to Western markets via Türkiye,” he said.

Speaking about economic cooperation, the head of the Turkish parliament said that the volume of trade between the two countries in 2021 increased by 41% compared to the previous year and exceeded US$2 billion, despite epidemic conditions. The total trade for the January-September 2022 exceeded US $ 1.5 billion.

According to Şentop, these indicators still do not reflect the potential between the two countries, and both sides want to reach US $5 billion trade volume target as soon as possible.

During the meeting, it was noted that this year marks the 30th anniversary of the establishment of diplomatic relations between the two countries. All this time, Turkmenistan and Türkiye have been actively developing cooperation in the political, diplomatic, trade, economic, cultural and humanitarian spheres.

Mustafa Şentop stressed that, for his part, he would continue to fully contribute to strengthening inter-parliamentary contacts aimed at building up a fruitful dialogue between the two countries.

He also expressed Türkiye’s readiness to continue supporting Turkmenistan in all international platforms, as it has done so far.

At the end of the meeting, the Turkmen leader and the Speaker of the Turkish Parliament expressed confidence that the traditional interstate cooperation based on strong ties of friendship and the unwavering goodwill of the parties will continue to strengthen and develop successfully for the common good.

UPDATE: Some details on prospects of Turkmen-Turkish gas transit cooperation from the press release by the Grand National Assembly of Türkiye:

“Referring to the difficulties in the transportation and energy transfer of the northern corridor due to the Russia-Ukraine war, Şentop stated that the corridor leading to Europe via Türkiye has become very important.

Expressing the cutoff of Russian gas for various reasons and the energy shortage in Europe, Şentop underlined that the energy to be transferred to Europe should be increased.

Şentop stated that some countries, such as Azerbaijan, have taken decisions to increase the amount of natural gas they send to Europe and he added, “It is very important that Turkmen gas is also activated in this time of energy shortage.”

Şentop noted that President, Recep Tayyip Erdoğan and President of Azerbaijan, Ilham Aliyev will pay a visit to Turkmenistan and strive to achieve a tripartite agreement on energy.

Şentop stated, “Important work has been done on infrastructure in this regard. I believe that this cooperation has become much more valuable and important in this period. I hope that such a visit will take place as soon as possible.”///nCa, 19 November 2022