Home » President of Turkmenistan to visit Türkiye early next year

President of Turkmenistan Serdar Berdimuhamedov will pay an official visit to Turkiye early next year. The statement came from Turkish foreign minister Mevlüt Çavuşoğlu on Monday during a joint press conference with his Turkmen counterpart Rashid Meredov in Ankara.

According to Turkish top diplomat, the parties discussed the preparations for the Türkiye-Turkmenistan-Azerbaijan trilateral summit, to be held in National tourist zone Awaza in Turkmenistan in December. 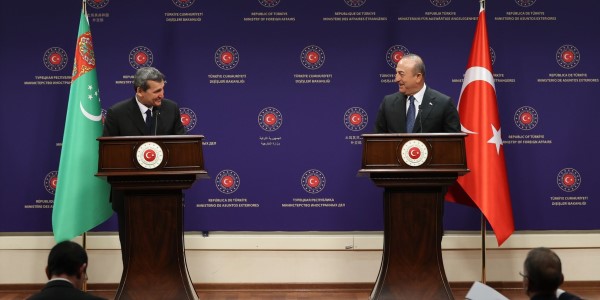 A number of documents are expected to be signed during the summit talks.

Moreover, the summit will be preceded by a meeting for energy, transportation and foreign ministers.

During tete-a-tete meeting Turkmen and Turkish foreign ministers reviewed the state of bilateral relations, including national and regional issues of mutual interest. They also exchanged opinions on political, economic and cultural ties.

Çavuşoğlu underlined the need to boost the bilateral trade to US $5 billion.

“We would increase the cooperation between our countries in various fields including transportation, energy, education and culture”, he stated.

He also hailed Turkmenistan’s observer status in the Organization of Turkic States and expressed hope that the country will become a permanent member in the future.

“We thank our Turkish brothers again for their close support of Turkmenistan’s policy of neutrality and international offers”, he added. ///nCa, 28 November 2022