The Speaker of the Grand National Assembly of Türkiye (GNAT) Mustafa Şentop and his accompanying parliamentary delegation held a meeting with the Speaker of the lower house (Mejlis) of the Parliament of Turkmenistan Gulshat Mammedova.

Şentop said that Türkiye has always been proud of being the first state to recognize independent Turkmenistan and open an embassy after the country gained independence.

Pointing out that the development of relations between the two countries has accelerated significantly, especially in the recent period, Şentop stressed that Türkiye is striving to extend this momentum to parliamentary relations as well.

According to the head of the Grand National Assembly of Türkiye, parliamentary diplomacy offers an important opportunity to contribute to the development of solution proposals for regional and global crises and he emphasized that with this approach the communication and cooperation should be strengthened at all levels between the parliaments of the two countries.

Speaker of the Mejlis Gulshat Mammedova also stated that the Turkmen side considers Türkiye and Turkmenistan as “two states, one nation.”

She stressed that thanks to the efforts of the Speaker of the Grand National Assembly of Türkiye, Mustafa Şentop, the friendship between the two countries, which lasted for centuries, was further developed.

At the end of the conversation, the Speaker of the GNAT invited the Chairman and deputies of the Mejlis Milli Gengesh of Turkmenistan to a meeting of the Parliamentary Assembly of Turkic-speaking Countries (TURKPA), which will be held in April 2023. ///nCa, 19 November 2022

Speaker of the Grand National Assembly of Türkiye (GNAT), Mustafa Şentop addressed the Plenary of the National Council in Ashgabat, which he visited to make contacts.

Speaker Şentop emphasized that Türkiye and Turkmenistan share a common past and civilization as history, culture and religion, Şentop stated, ‘We will build our common future with the strength we get from these places. One of the most important turning points in which we started to build our common future is the independence of Turkmenistan,  as Türkiye we were  the first country to recognize independent Turkmenistan, we opened the first embassy in Ashgabat 30 years ago.’ 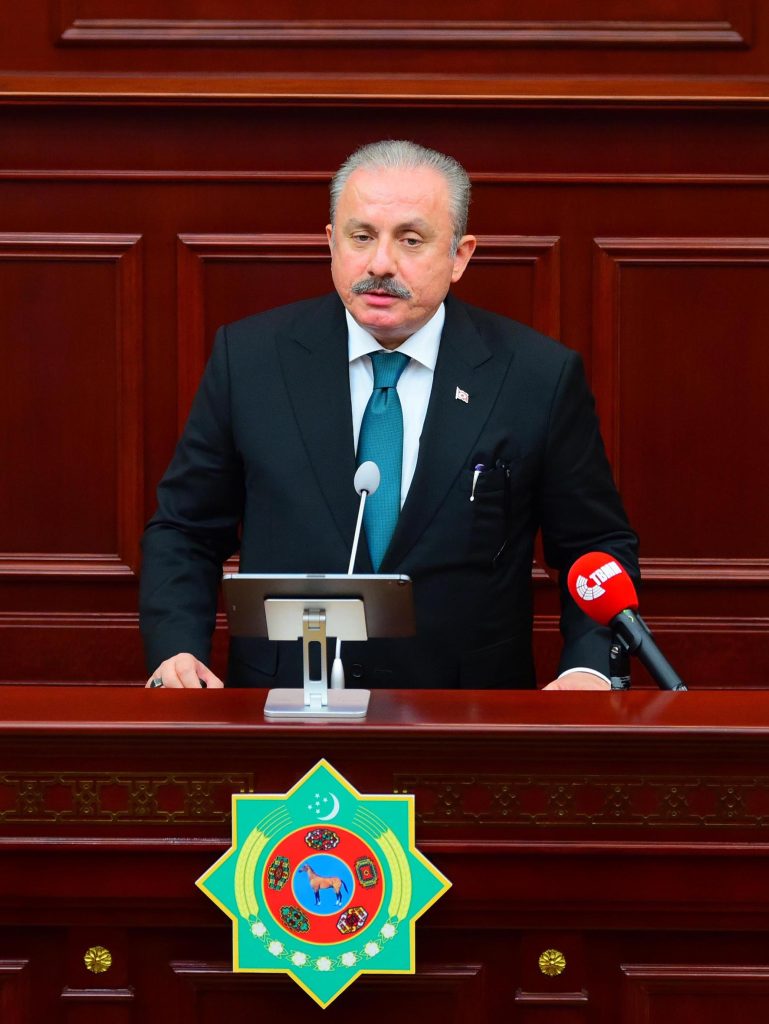 Şentop expressed that in accordance with peaceful and entrepreneurial foreign policy, Türkiye is the co-founder of the United Nations (UN) and the Council of Europe, one of the principal members of NATO and the Organization for Security and Cooperation in Europe (OSCE), a candidate for membership of the European Union, it is also the founder of the Organization of Turkish States (OTS) and the part of many regional organizations.

Şentop stated that Türkiye has become one of the largest economies in the world with its breakthroughs in the field of economy and he added, ‘On the other hand, in a geography surrounded by conflict and instability, we strive to create a zone of peace and prosperity through entrepreneurial and humanitarian foreign policy for ending the humanitarian tragedy in Syria and resolving the Russia-Ukraine crisis.’

Şentop noted that the UN is far from fulfilling the mission envisaged in its founding purposes, and he added, ‘The actors and institutions of the international system, which was established to be a solution and answer to the problems and needs of the last century, cannot keep up with today’s requirements and find solutions to their problems.’ Şentop cited the events in Azerbaijan, Georgia and Ukraine as an example of the situation in question and he stated, ‘These processes reveal the need for a new international system and a new structure in the United Nations. In this setting, regional cooperation, international solidarity and cooperation gain more importance.’

Şentop pointed out that crises also contain some opportunities and added, ‘We should also evaluate the wide range of cooperation opportunities between our countries, ranging from economy to health, from transportation to energy.’

Expressing that the unity of Türkiye and Turkmenistan will make important contributions to the stability of the world, Şentop stated, ‘ The unity of our countries, which undertake their obligations to ensure international security, prosperity and peace, and strive to fulfill them duly, will always contribute to the security and stability of not only the region but also the whole world. Today, when the course of history begins to change, the global system to be reconstructed should be described in a way that will benefit all humanity with the balance of rights, justice, humanity and freedom, as Turkish States, we must serve together.’ ///GNAT

There was a tete-a-tete followed by expanded format talks. 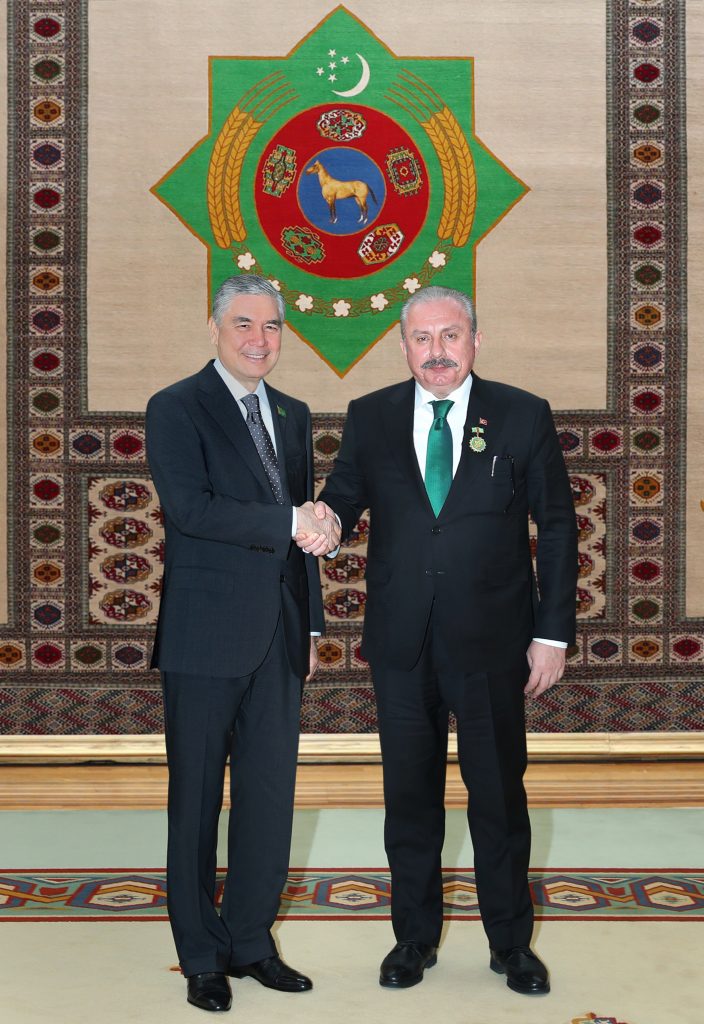 A number of issues of bilateral and international importance were discussed, covering the entire spectrum of the robust partnership between the two countries.

Arkadag Berdimuhamedov said that Turkmenistan and Türkiye act in unanimity on the global arena, at the platforms of international structures and, first of all, the United Nations.

He added that today a difficult political situation is developing in various regions of the world, which requires a peaceful, political and diplomatic settlement. In this regard, Turkmenistan has taken the initiative to develop a draft Resolution of the UN General Assembly “Dialogue is a guarantee of peace”, as well as to declare 2025 the Year of Peace and Trust at the level of the Community of Nations, said the head of the Halk Maslakhaty Milli Gengesh. He expressed confidence that these proposals, designed to promote maintenance of global peace and security, will gain broad support from friendly states, including the Republic of Türkiye.

Arkadag Berdimuhamedov also pointed out Turkmenistan’s support for the efforts of the Republic of Türkiye to ensure peace and security, and achieve the Sustainable Development Goals at the international and regional levels.

Considerable discussion took place about the trilateral Turkmenistan-Azerbaijan-Türkiye Summit, which will take place in Ashgabat.

The Turkmen head of Halk Maslahaty said that some rounds of preparatory consultations have already taken place at the ministerial level and there was the need to arrange a meeting of the foreign ministers of the three countries to finalize the arrangements and the agenda.

Arkadag said that in this post-pandemic period of recovery, the foreign trade turnover of Turkmenistan was US$2.573 billion in 2021, which reached US$ 2.054 billion during the first nine months of this year, showing a growth of 13.8% against the corresponding period of the previous year.

There was satisfaction at the growing pace of bilateral trade. Arkadag said that Türkiye holds the second place among the foreign trade partners of Turkmenistan and there is still vast untapped potential for growth.

In order to tap this potential, Arkadag proposed some specific projects in the promising areas of economy.

In the same context, the Turkmen side said that the Turkmenbashy Port, opened in 2018 after modernization and expansion, could contribute to the efficiency of the Baku-Tbilisi-Kars railway.

He opined that the expansion of production capacity in energy, investments, new technologies, agriculture, textiles, and gas chemicals could offer interesting possibilities for cooperation.

The Chairman of the Turkish Grand National Assembly, Mustafa Şentop, agreed with the remarks and observations of Arkadag Berdimuhamedov.

He said that Türkiye was ready to help in the supply of the Turkmen natural gas to Türkiye.

Head of Turkish Parliament awarded the State Order of Turkmenistan

The Order was presented by Arkadag Berdimuhamedov for the contribution made to the development of economic and cultural relations between Turkmenistan and Türkiye.

Stating that he was very pleased with the awarding of this precious State Order, Şentop expressed his gratitude to the President of Turkmenistan, Serdar Berdimuhamedov, and the Speaker of Turkmenıstan People Councıl, Gurbanguly Berdimuhamedov.

The Speaker of the Grand National Assembly of Türkiye Mustafa Şentop to Turkmenistan and head of the upper house of Turkmen Parliament signed a Cooperation Protocol.

After signing the Cooperation Protocol, Şentop stated that this protocol is an indication of their desire and common will to strengthen the friendship and brotherhood between Türkiye and Turkmenistan.

According to him, the document will enhance the contacts between the two countries at all levels and the necessary steps will be taken immediately by considering the common interests. ///nCa, 19 November 2022