The event brought together the heads and leading experts of the Parliament of Uzbekistan, the Ministry of Foreign Affairs, the Institute for Strategic and Interregional Studies under the President of Uzbekistan, the Center for Economic Research and Reforms under the Presidential Administration, the Information and Analytical Center for International Relations under the Ministry of Foreign Affairs, the Coordination and Methodological Center for the Modern History of Uzbekistan under the Academy of Sciences, the Republican Turkmen National Cultural Center. 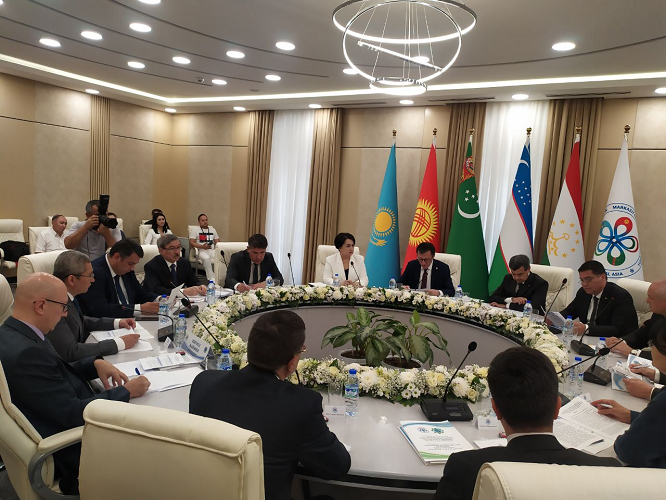 The forum program included two sessions: “New opportunities for sustainable development in the political and economic sphere” and “Social and humanitarian cooperation: Experience and prospects”.

The experts exchanged views on the future directions of development of the multidimensional strategic Turkmen-Uzbek dialogue, which is important not only from the point of view of bilateral relations, but also has a significant impact on ensuring the progressive development of the entire Central Asian region.

Inaugurating the conference, the director of the IICA, Anvar Nasirov, said: “The constructive and trusting nature of relations between the Republic of Uzbekistan and Turkmenistan meets the fundamental interests of the two fraternal states, and also serves as a key factor in ensuring peace, stability and security of Central Asia”, quoted the Information Agency Dunyo.

The trade, economic and investment cooperation is central to the relations of the two countries. This is eloquently evidenced by the statistical data provided by Nasirov during his remarks.

In 2021, the trade turnover between Uzbekistan and Turkmenistan increased to US $ 902 million, while in 2016 mutual trade slightly exceeded US $ 200 million.

The IICA chief executive also noted that last year Turkmenistan entered the top ten countries in terms of volume and growth rates in the export of goods and services of Uzbekistan.

And it is obvious that these figures will not be the limit, because the potential is quite high. “The most significant is the expansion of industrial cooperation of enterprises of the agro-industrial complex, automotive and light industry, transport and communications, as well as the involvement of companies of the two countries in the implementation of major infrastructure projects in the territories of Uzbekistan and Turkmenistan, which will contribute to the creation of new jobs, the development of cooperative ties at the level of industries and serve the goals of further improving the welfare of fraternal Uzbek and the Turkmen people,” Nasirov stressed.

The realization of the transport and transit potential of Uzbekistan and Turkmenistan is among the promising areas of bilateral cooperation.

“Today Turkmenistan is becoming one of the main transit states of Central Asia. A large cargo flow of Uzbek goods is carried out through its territory to the borders of Iran and further to the ports of the Persian Gulf,” the head of IICA underlined, recalling that both countries are working together to promote the Uzbekistan-Turkmenistan- Caspian Sea-South Caucasus transport corridor, which offers access to the Black Sea ports of Georgia, Turkey, Romania and other countries.

“In order to raise the competitiveness and attractiveness of international transport routes passing through the territories of the two countries, systematic mutually beneficial cooperation is being conducted aimed at further optimizing tariffs and providing favorable conditions for transit of foreign trade goods,” Nasirov explained.

The performance indicators proves that endeavors of the two republics are bearing significant fruit. According to IICA head, in 2021, international cargo transportation between Uzbekistan and Turkmenistan amounted to almost 2 million tons, 18% up from 2020.

Akramjon Nematov, first Deputy Director of the Institute for Strategic and Regional Studies under the President of Uzbekistan spoke in favor of the urgent need to promote transport and logistics connectivity as a priority of Uzbek-Turkmen cooperation, Kun.uz reports.

The ISRS expert offered several reasons why the development of connectivity and managing of emerging obstacles in this area has become particularly relevant today.

They include restrictions in terms of access to large global sales markets, insufficient development of transcontinental connectivity, which causes significant transit and transport costs; the pandemic and pandemic-caused disruption of logistics chains, congestion of international seaports, breaking of traditional transport, transit and logistics networks; sanctions policy against Russia and Belarus, restricting the capacity of the northern transport corridors. 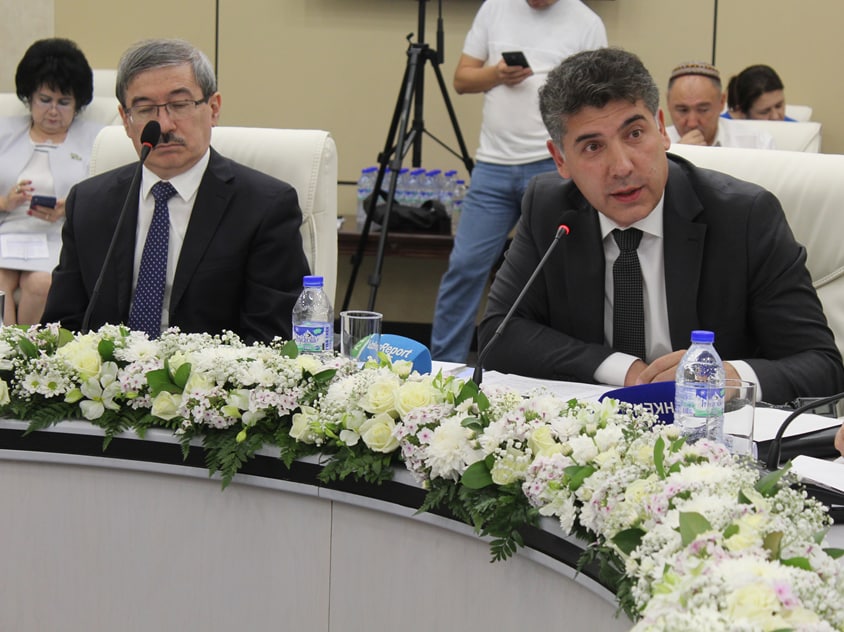 According to Nematov, in the context of the transformation of international transport and the search for new alternative routes for cargo delivery, both risks and new partnership opportunities arise.

“We (Uzbekistan and Turkmenistan) need to jointly take practical measures to turn Central Asia into a hub for the intersection of trunk routes between Asia and Europe, to increase the capacity and the traffic through transcontinental land routes crossing Central Asia,” the representative of ISRS believes.

In particular, he stressed the importance of joint push for the Trans–Caspian and Trans–Pacific corridors, the port of Turkmenbashi, coordination of efforts in promoting the multimodal transport corridor Asia Pacific – China– Kyrgyzstan – Uzbekistan – Turkmenistan – Azerbaijan – Georgia– Turkey – Europe.

Many steps have already been taken in this direction – the Turkmenabat-Farab railway and automobile bridges across the Amu Darya are operating, contributing to the growth of the cargo flows.

“At the same time, today it is essential to increase the capacity and simplify the administrative procedures of the southern route of the Trans-Caspian Corridor passing through the port of Turkmenbashi,” the first deputy director of ISRS said.

Water cooperation between Uzbekistan and Turkmenistan is exemplary

“At the present stage, close cooperation between Uzbekistan and Turkmenistan in the water sector, ecology and environmental issues can justly be called exemplary and the most effective,” the director of the IICA praised the water relations between the two countries sharing the Amu Darya, the main waterway of Central Asia.

He recalled that last year the parties agreed to establish a joint Intergovernmental Water Management Commission. To date, the committee have already held two sessions. On this platform, the parties constructively discuss all relevant issues in this area.

IICA Director Anvar Nasirov highlighted in detail the steps taken by the government of Uzbekistan aimed at preserving the national identity of the Turkmen diaspora living in the republic:

“In order to preserve the traditions, language and culture of Turkmens, the Republican Turkmen Cultural Center has been established in Uzbekistan since the first years of independence, which unites 6 Turkmen cultural centers in different regions.

In 2017, the faculty for training teachers for primary classes in teaching in the Turkmen language was opened at the Nukus State Pedagogical Institute named after Azhiniyaz. And the Karakalpak State University has the Faculty of Turkmen Philology.

Mutual support and consensus in the international arena

Anvar Nasirov stressed the common position of Turkmenistan and Uzbekistan that strengthening friendship, mutual trust and expanding cooperation in the region is an important factor in maintaining peace and stability in Central Asia.

Moreover, Turkmenistan and Uzbekistan provide mutual support, actively cooperate within the framework of international and regional structures such as the United Nations, the Commonwealth of Independent States, the International Fund for Saving the Aral Sea, the Organization for Economic Cooperation, the Organization of Turkic States and others.

The head of the IICA stressed the similarity of the positions of the two countries regarding the support of a common neighbor – Afghanistan. Both countries are taking steps to develop trade, economic, transport, logistics and energy ties with Afghanistan, implement joint infrastructure projects, and provide comprehensive humanitarian assistance to the Afghan people.

Rector of the IIR of the Ministry of Foreign Affairs of Turkmenistan: The conference in IICA will contribute to the development of fruitful scientific ties between academic and expert circles of the two countries

The Rector of the Institute of International Relations of the Ministry of Foreign Affairs of Turkmenistan, Jumamyrat Gurbangeldiyev, in an interview with the Dunyo Information Agency, stressed that “our countries are actually proving their commitment to the principles of a balanced approach to finding effective multilateral mechanisms for maintaining stability, economic growth and security in the region and the world.”

“Today, the countries of Central Asia occupy strong positions in the international arena and make a significant contribution to solving the complex challenges of our time”, said Jumamyrat Gurbangeldiyev.

He expressed hope that the forum will contribute to the development of fruitful scientific ties between the academic and expert circles of Uzbekistan and Turkmenistan, regional cooperation in general.

Turkmenistan and Uzbekistan are actively developing a constructive dialogue on the entire spectrum of political, diplomatic, economic and humanitarian ties at various levels, including the highest one, which has allowed the Turkmen-Uzbek relations over the past few years to enter the trajectory of a long-term partnership.

In recent years, two republics have been focusing on the need for joint efforts in the field of science and education. Cooperation between the academic circles of the two states is intensifying. Meetings between universities and scientific institutions of the two countries are held regularly.

The partnership of Uzbekistan and Turkmenistan accumulates great opportunities for building up the potential of scientific and educational cooperation based on the study and exchange of best practices.