On 30 June, a six-party meeting on the development of the international multimodal route “Asia-Pacific countries-China-Kyrgyzstan-Uzbekistan-Turkmenistan-Azerbaijan – Georgia – Turkey – Europe” was held in Cholpan-Ata, Kyrgyzstan, the press service of the Kyrgyz Railways reports.

The meeting was attended by heads and representatives of the railway authorities of Kyrgyzstan, Uzbekistan, Turkmenistan, Georgia, Turkey, as well as the logistics company of Azerbaijan.

Azamat Sakiyev, General Director of the Kyrgyz Railways stressed the importance of the event, which will expand the range of coverage of cargo transportation in the Asia-Pacific countries. 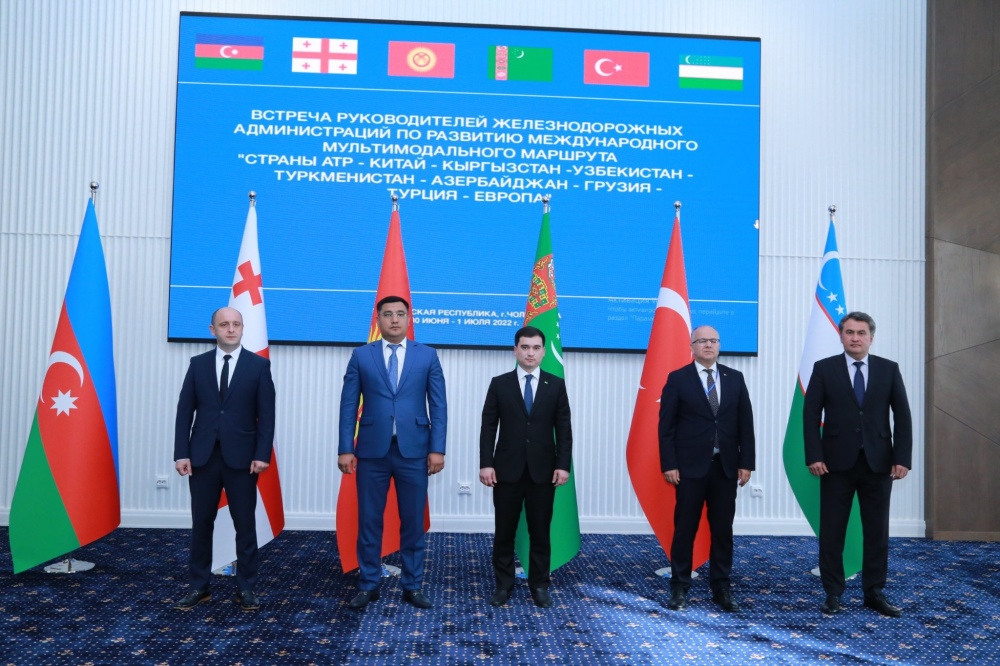 “The practice of annual meetings shows that the Route development project has significantly expanded its borders and already serves as an effective platform for solving current issues of strengthening cooperation between railway administrations, logistics companies and other route participants,” he said.

The meeting reviewed the current outcomes of the implementation of the international multimodal route project. The parties noted that coordinated measures and interaction of all participants of the corridor contribute to its development, growth of the cargo transportation, speeding up the travel of container trains and the organization of combined cargo transport along this route.

The event followed with the signing a protocol, which reflects measures aimed at the further development of the multimodal route “Asia-Pacific countries-China-Kyrgyzstan-Uzbekistan-Turkmenistan-Azerbaijan-Georgia-Turkey-Europe”.

The idea of this route combining road and rail transportation came out in Tashkent in 2019, when the railway agencies of the six countries met for the first time. Then the parties agreed to launch the international multimodal route “Asia–Pacific countries – China – Kyrgyzstan – Uzbekistan – Turkmenistan – Azerbaijan – Georgia – Europe” with the development of unified, competitive tariffs (including tariffs for sea feeder transportation). Geographically, the route runs via Kashgar – Osh (Kyrgyzstan, with the involvement of road transport) – Andijan (Uzbekistan) – Farab – port of Turkmenbashi (Turkmenistan) – port of Alat (Azerbaijan) – Gardabani (Georgia) – ports of Georgia – Kars (Turkey) – ports of Turkey.

The route is aimed to increase the volume of trade between the countries of the European and Asian continent as well as between Central Asia and Caucasus. ///nCa, 2 July 2022