The sides discussed in detail the upcoming official visit of the President Serdar Berdimuhamedov to Russia. A number of documents for the development of trade and economic cooperation between the two countries will be signed during the summit talks.

“Our relations are strategic in nature, the partnership is developing on the basis of friendship and mutual respect. The basis of relations is the agreement signed in 2017 between Russia and Turkmenistan on strategic partnership. Our presidents are in constant contact, and the development of bilateral cooperation maintains positive dynamics,” Alexander Novak stressed. 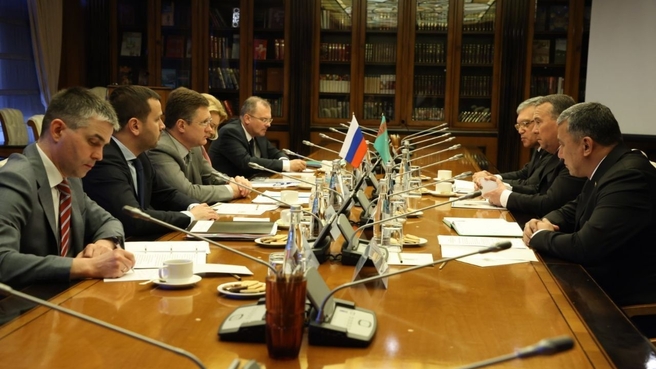 Novak noted the significant role of the fuel and energy complex in the economic cooperation between the two countries. “Turkmenistan has significant reserves of natural gas, Gazprom is successfully cooperating with Turkmengaz along this line, and a contract for the purchase and sale of Turkmen gas has been concluded on 1 July 2019. In addition, Russia provides services for the transportation of Turkmen oil, there is cooperation in the oil sector, work continues on the reconstruction of Turkmen energy facilities,” he added.

Russia and Turkmenistan also have significant opportunities to increase cargo flows along the eastern route of the North–South international transport corridor. Russian companies are working with their Turkmen colleagues on issues of their participation in projects of electrification of Turkmenistan’s railway lines, modernization of its railway infrastructure. By joint efforts, we will solve the issue of attracting transit cargo, in general, we will realize the transit potential of Turkmenistan, Alexander Novak promised.

At the end of the meeting, Russian Deputy Prime Minister invited Turkmen delegation to attend the several events, including 25th St. Petersburg International Economic Forum, the second Caspian Economic Forum and the Russian Energy Forum scheduled for this autumn.///nCa, 10 June 2022