You are here: Home / Articles And Reports / Turkmen delegation met with the Minister of Energy of Pakistan

The delegation of Turkmenistan headed by Deputy Minister of Foreign Affairs of Turkmenistan Vepa Hadjiev is in Pakistan on a working visit from 31 January to 4 February 2022. The purpose of the visit is to discuss the implementation of two flagship trans-regional projects – the TAPI gas pipeline and the TAP power transmission project.

On the first day of the visit, the delegation was received by Muhammad Hammad Azhar, Minister of Energy of Pakistan. 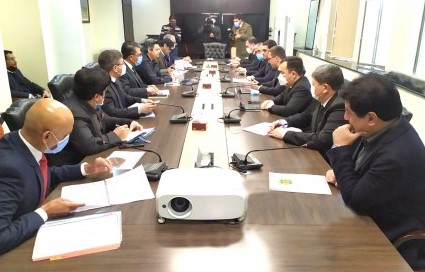 The parties reaffirmed their commitment to the TAPI project’s implementation and emphasized the importance of expediting it.

In light of the growing natural gas demand in Pakistan, minister Azhar expressed his country’s determination to complete the TAPI project as soon as possible.

As a result of the negotiations, the parties agreed to hold a meeting of the technical working group on TAP in the near future in order to develop the pre-feasibility parameters of the project.

The meeting of the technical working group on the TAPI gas pipeline project to develop a future roadmap taking into account the changed dynamics of the project took place on Tuesday, according to Pakistani mass media reports.

The Turkmen delegation included Chairman of the board and CEO TAPI Pipeline Company Limited Muhammetmyrat Amanov; Head of the Department of International Power Projects in the direction of Turkmenistan-Afghanistan-Pakistan, Ministry of Energy of Turkmenistan M. Artykov; Ambassador of Turkmenistan to Pakistan Atadjan Movlamov; Chairman of the concern Turkmenenergogurlushyk N. Atayev; as well as representatives of the project company – Calik Holding.

On the Pakistani side, the meeting was attended by Secretary Power Division Syed Asif Haider Shah, Secretary Petroleum Division Ali Raza Bhutta and senior officials of the Ministry of Energy.

Over the past few years, Pakistan has been experiencing an acute energy shortage, putting pressure on the country’s economy. The energy crisis primarily affects export industries, including the textile industry, which serves as the main source of foreign currency revenues.

The commentary published by the Express Tribune says that Pakistan imported LNG at $12 per mmbtu on spot-purchase basis. Presumably, the gas to be supplied via TAPI may cost for Pakistan at $6-$7 per mmbtu, and even a possible upward price review will not be “a major issue”.

1840-km long TAPI would transport up to 33 billion cubic meters of natural gas per year from the Turkmen Galkynysh and adjacent gas fields to Afghanistan, Pakistan and India over the next 30 years. /// nCa, 2 February 2022