You are here: Home / Articles And Reports / National Day of Kazakhstan celebrated in Ashgabat

The embassy of Kazakhstan in Ashgabat hosted a reception on Monday, 16 December 2019 to mark the 28th anniversary of the independence of Kazakhstan.

Here is the speech of Ambassador Yerkebulan Sapiyev on the occasion:

Before starting my speech, I would like to congratulate the distinguished President of Turkmenistan and the fraternal Turkmen people on the International Day of Neutrality that has recently taken place!

I heartily greet all of you at our official reception on the occasion of the 28th anniversary of the Independence of the Republic of Kazakhstan and express my deep gratitude for your participation.

Twenty-eight (28) years ago, the First President of the Republic of Kazakhstan, the Leader of the nation, distinguished Nursultan Abishevich Nazarbayev, laid the foundations of the development of our country.

All these years, under his wise leadership, Kazakhstan was building an independent state.

Today, Kazakhstan is known as a successful, stable and dynamically developing country.

This year an important political event took place in our country – peaceful and open transit of power. The Leader of the nation, distinguished N.A. Nazarbayev made a historic decision to terminate his powers as the President. With voluntary resignation, he showed a unique example of the political leadership of an independent country.

June 9, an extraordinary presidential election was held. Distinguished Kassym-Zhomart Kemeluly Tokaev was elected the Head of the State.

The strategic development course laid down by our Leader of the nation continues. The current activities of the Head of the State are based on three main principles – succession, justice and continuous development (progress).

Kazakhstan will develop according to the formula “Strong President – influential Parliament – Accountable  Government.”

From the first days of Independence, our country developed according to the principle “first economy – then politics.” We brought the economy to a “market” track, carried out large-scale reforms in the financial sector, industry, agriculture, and social area.

What did we manage to achieve?

In the Global Competitiveness Index of the World Economic Forum, our country rose to the 55th place among 141 countries.

The investment climate is improving. Three hundred and twenty billion US dollars($320) of direct foreign investment were attracted, including $118 billion over the past five years.

There are 16,800 companies with foreign capital in Kazakhstan.

Favourable immigration conditions are forming. Visa-free arrangements for up to 30 days are valid for citizens of 76 countries of the world.

The transport and logistics infrastructure is developing. More than 12.5 thousand km of roads and more than 2.5 thousand km of railways were built and reconstructed; renovation was carried out at 15 airports. Soon the Open Sky Regime will be in effect at 11 major airports in Kazakhstan. This will allow airlines from around the world using the fifth degree of freedom of the air traffic. The geography of flights expanded to 99 international air routes.

Transit land corridors are developing. From the East to the West and from the North to the South, access to the markets of Europe, South-Eastern Asia, China, Russia, Turkey and the Gulf countries is provided. One such corridor is Western Europe-Western China International Highway. Cargo from China is delivered to Europe via Kazakhstan in 10-15 days, while delivery via the South Sea route takes about 2 months.

Kazakhstan is a large agricultural country and is one of the largest producers and exporters of grain. This year, the grain harvest amounted to more than 19 million tons, of which 7 million tons will be exported. We have 26 million hectares of arable land. Until 2030, the area of irrigated land will increase to3 million hectares.

Our country is actively developing the social area.

In the area of healthcare, nuclear diagnostics, robotic kinesitherapy, tomotherapy and other high-tech services are provided. The country conducts 84 thousand cardiac operations per year. Six (6) medical organizations have JCI International Accreditation. Medical tourism is actively developing. Every year, foreigners from more than 45 countries of the world come to the clinics in Kazakhstan for medical treatment. Over the next three years, the state will allocate $7.2 billion to finance free medical care.

First President – Leader of the nation, distinguished Nursultan Abishevich Nazarbayev, is the creator of a multi-vector and predictable foreign policy.

Each year, the capital of Kazakhstan hosts the Astana Economic Forum and the Eurasian Media Forum, and is involved in resolving the Syrian crisis.

In 2017, for the first time in the CIS, Kazakhstan held the International Exhibition “EXPO-2017” – “Energy of the Future”.

Kazakhstan’s activities as a non-permanent member of the UN Security Council in 2017-2018 were productive and useful for the entire Central Asian region.

From the first days of Independence, Kazakhstan and Turkmenistan established friendly, good neighbourly relations based on the principles of mutual trust and equal cooperation. Fraternal Turkmenistan is an important strategic partner, both in the Central Asian region and in the Caspian region.

In October this year, the President of the Republic of Kazakhstan, distinguished Kassym-Zhomart Kemeluly Tokayev, paid his first working visit to Turkmenistan as part of a meeting of the Council of the Heads of the CIS States.

Cooperation in the trade and economic area is actively developing. The volume of mutual trade is growing.

Interaction in the transport sector is intensifying. Our countries are connected by the Kazakhstan-Turkmenistan-Iran railway. This trunk line is of strategic importance for the revival of the Great Silk Road, development of mutual trade among the countries of Central Asia, the Caspian region and neighbouring regions.

A highway is underway to the Kazakh border and a bridge across the Garabogazgol Bay. In future, they will become a road and a bridge of friendship and neighbourliness, will even more closely connect our countries and the peoples.

Cultural and humanitarian relations and interregional ties are strengthening.

Turkmenistan is a fraternal state for us. Our nations have close linguistic, cultural, ethnic and historical ties.

I am convinced that the friendly relations between two fraternal nations will continue and will rapidly expand and strengthen in future.

At the end of my speech, I would like to congratulate the distinguished President of Turkmenistan on the coming New Year, wish him good health and success in his responsible state activities, and to the fraternal Turkmen people – wellbeing and prosperity.

Once again, I express my sincere appreciation to all guests for participation.

On the next several pages, some pictures from the event: 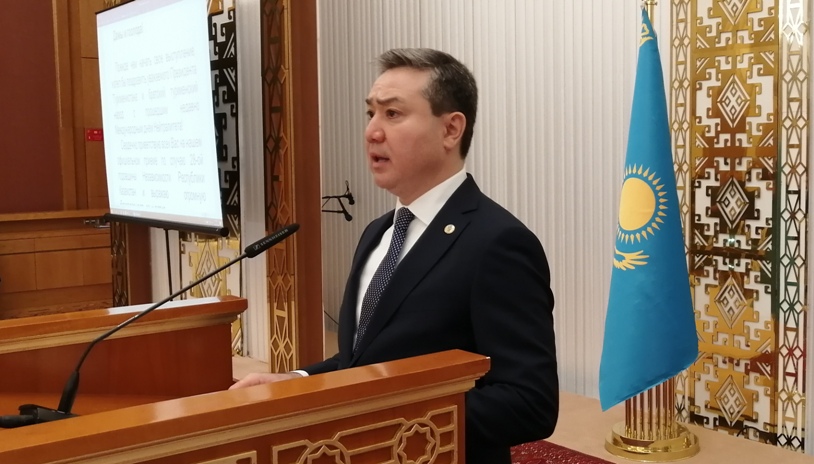 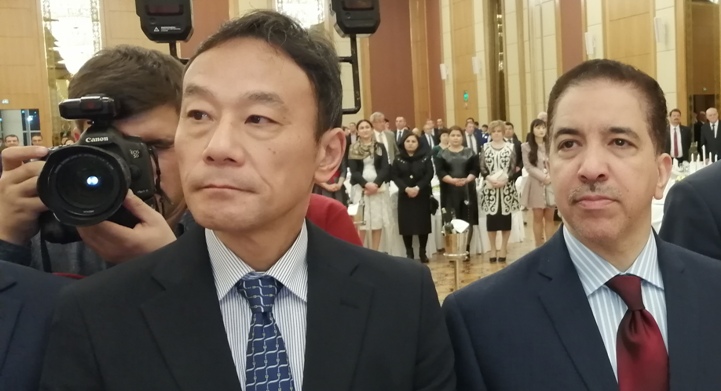 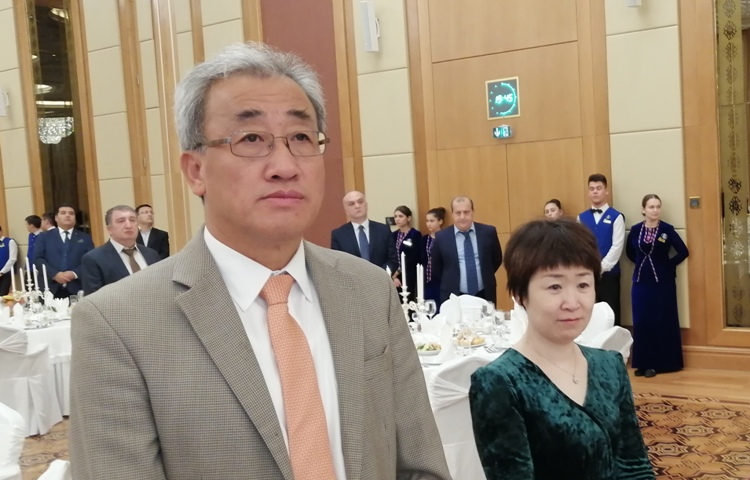 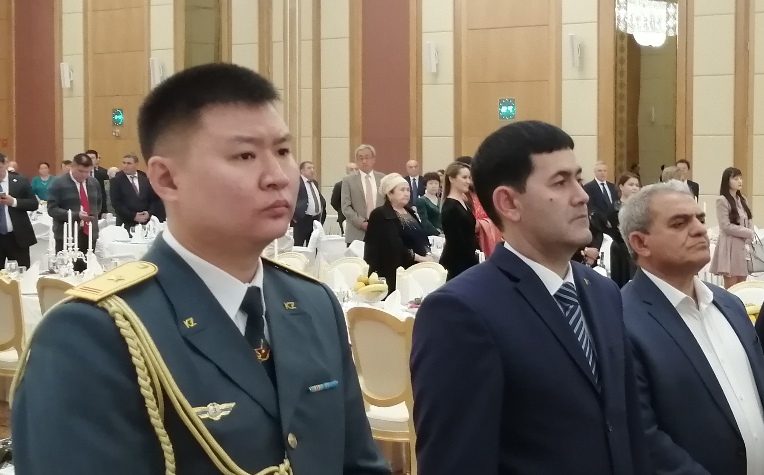 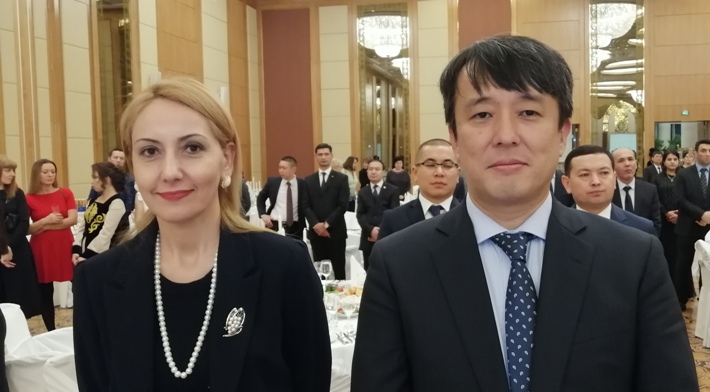 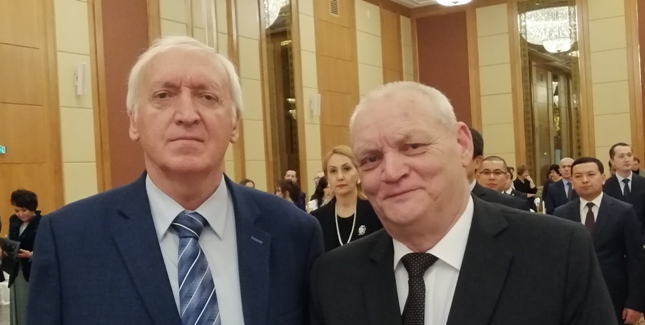 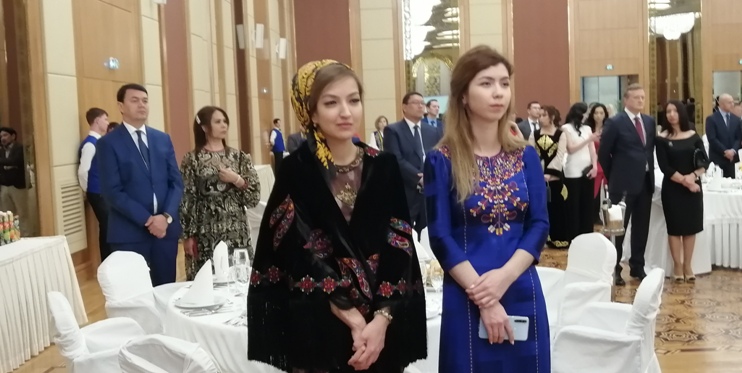 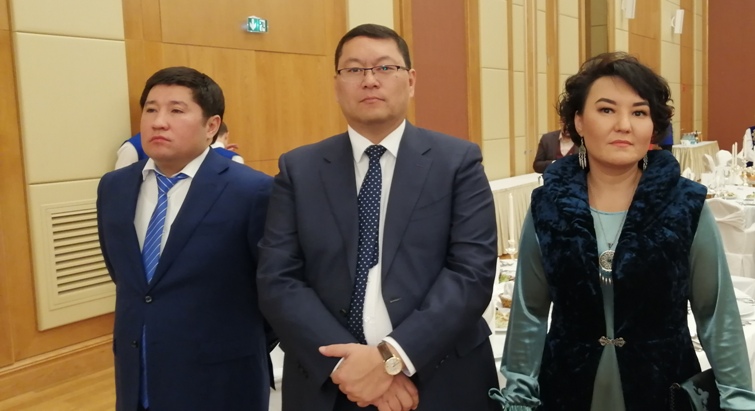 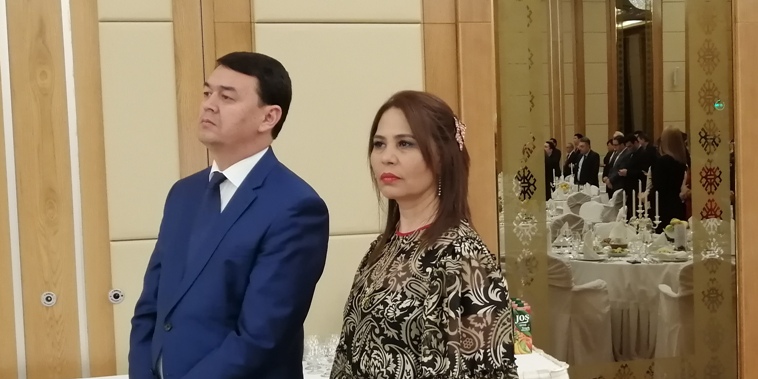 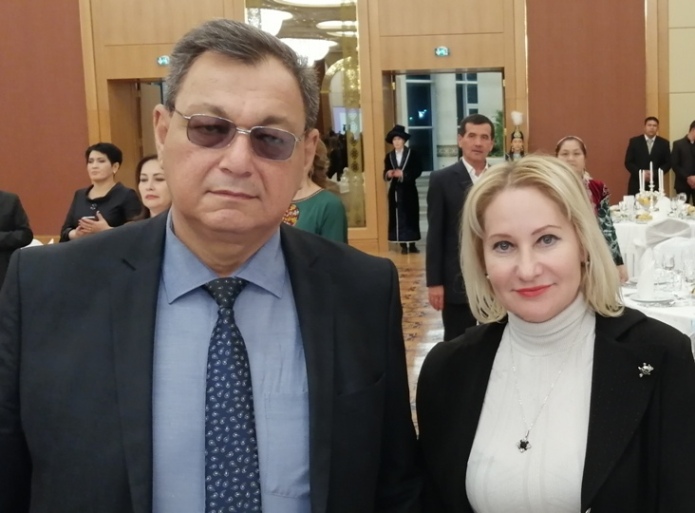