You are here: Home / Articles And Reports / Peace in Korean Peninsula is Good news for Central Asia

It was just one step but it was a step that can possibly change the course of history, not just for the Korean peninsula but the entire world. Central Asia must rejoice.

The North Korean leader Kim Jong Un and South Korean President Moon Jae-in met on Friday (27 April 2018) at the DMZ. Their meeting at the truce village of Panmunjom near the line of separation raised the prospects of permanent peace, and possibly the peaceful reunification of the two Koreas at some point in the future. 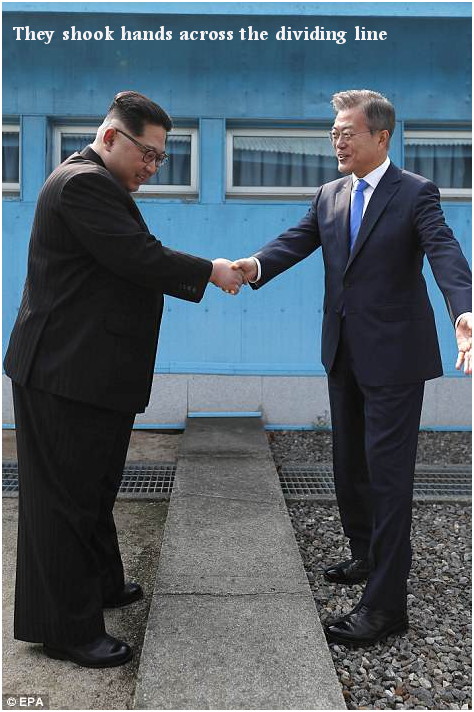 The summary of their joint statement (given at the end of this commentary) shows that they are looking at realistic goals. And, they seem to have every intention to meet those goals.

For now, they would focus on humanitarian and cultural aspects such as joint participation in international sporting events, reunion of separated families, etc.

They would also consult with each other for the balanced economic growth and shared prosperity. 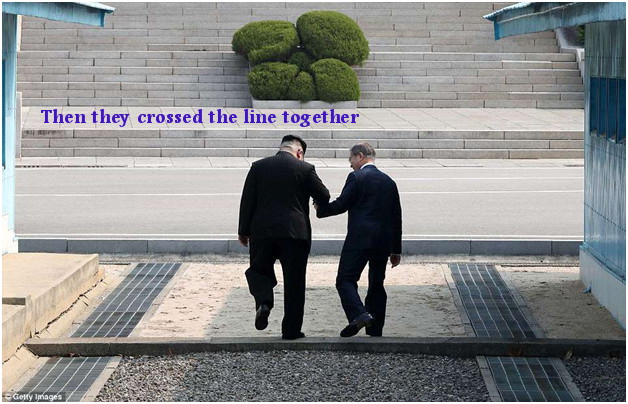 Even though Trump is already claiming the rapprochement as a fruit of his hard-line stance, the fact is that much of it is owed to the courage and wisdom of Moon Jae-in, who listened to his own heart when pursuing peace with the North.

Moon Jae-in succeeded because of who he is – the sum total of his being: his origins, his struggle against the system despite all odds, his rise within the system, his resilience and compassion, and his ability to remain unaffected by the external noise. 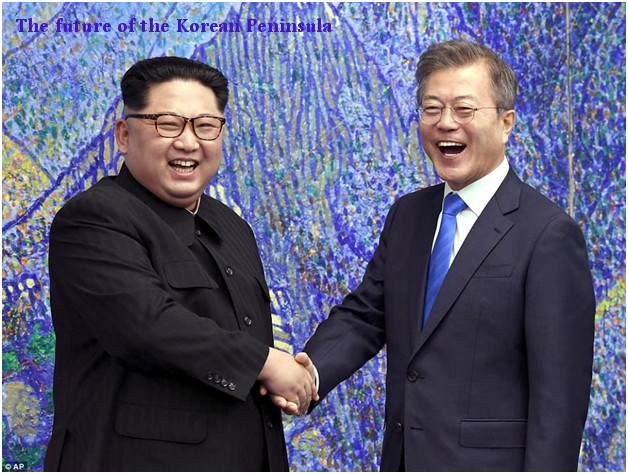 For instance, his decision to participate jointly in PyeongChang 2018, and the way he gave respect and warm support to the guests and athletes from the North was a major icebreaker.

Considerable role was also played by President Xi Jinping of China in convincing the leader of the North Korea to give peace a chance.

What is the take-home message for Central Asia?

Central Asia doesn’t have any outstanding issues of unification because the boundaries of each country are mutually accepted. Nevertheless, the basic principles are the same when it comes to blocking out the external interference and seeking out the solutions from within.

Here is what we can learn from the Korean dialogue:

There is also a very important aspect which relates directly to the recent proposal of President Berdymuhamedov of Turkmenistan to establish a consultative council of the heads of state of Central Asia.

We have seen three remarkable cases of reunification in the recent history – Germany, Vietnam, and Yemen.

Germany and Yemen are on the opposite ends of the spectrum and Vietnam is in the middle.

The success of German reunification is based on: 1. Absence of external interference; 2. Huge sacrifices by the western part of Germany; 3. Maintenance of the political climate to let the process reach its logical fruition.

The failure of the Yemen model is based on: 1. Non-stop interference by foreign powers; 2. Lack of resources to spread universal prosperity; 3. Political discord in the national landscape.

Reunification of two separated parts of a country and selective integration in a region are similar in some ways. If the heads of the Central Asian states can unite in a consultative council, they can make sure that the solutions come from within rather than at the orchestration of any outside players.

A significant part of the success of the meeting was the attention to small details. Perhaps, this is a nearly universal principle – the genius is in detail.

And, of course, throughout there was genuine warmth. 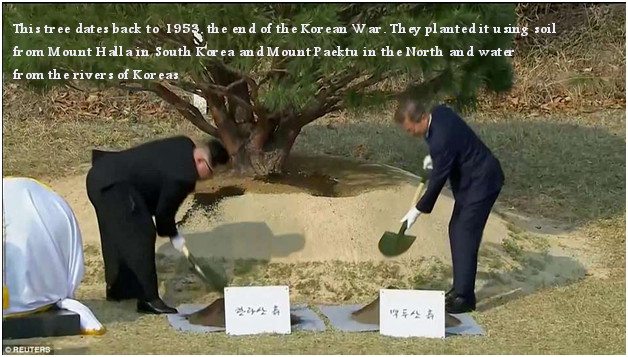 The jointly planted a pine tree dating back to 1953, the year of the signing of the armistice and the end of the Korea War. The soil was brought from Mount Halla in South Korea and Mount Paektu in the North and waters from the rivers of both Koreas. The plaque in front of the tree reads: Peace and Prosperity Are Planted.

Moon said that for more meetings he would like to travel to the North Korea and visit the Mount Paektu near the border of China. Kim said that the trip under the present conditions would be uncomfortable but North would improve its transportation network should Moon decide to visit. 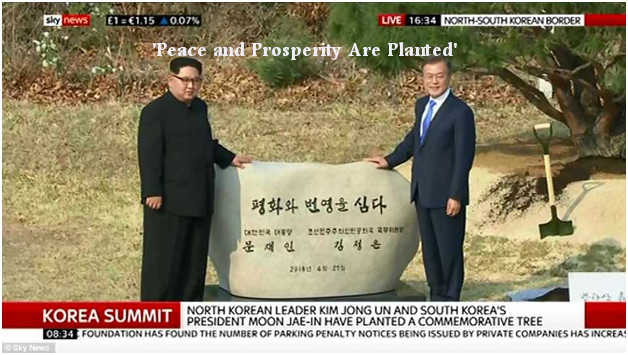 Kim said that the Northern Korean delegation that participated in the Pyeongchang Winter Olympics was impressed by the bullet trains of South Korea, and this also highlighted the awareness of how poor the infrastructure of their own state was.

Moon said that the people of both the Koreas would be able to enjoy the high speed train services if the relations improve and the countries connect their rail networks at the borders.

At the talks inside the Peace House the distance between the chairs of the two leaders was exactly 2018 mm, a nod to the current year.

Many of the buildings in Panmunjom were repainted to blue, the colour of the Korean Unification Flag and the UN. 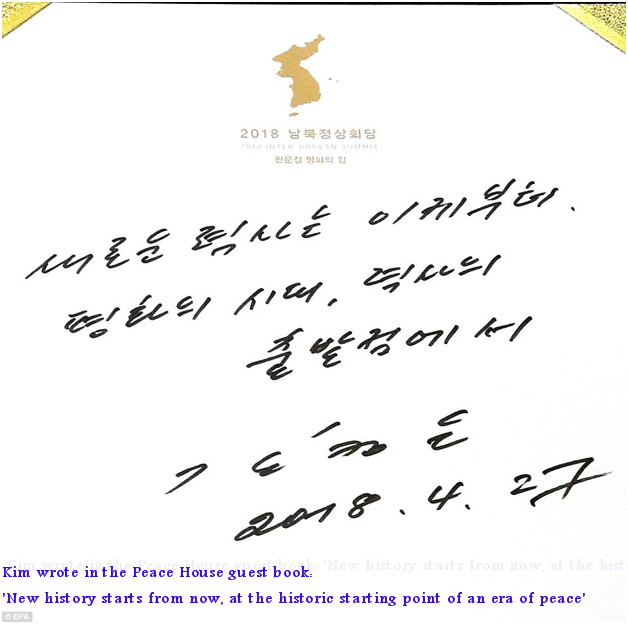 Kim quipped that he hoped Moon would enjoy North Korea’s famous cold noodles that will be brought to the banquet after the summit, saying it was difficult to bring the noodles from Pyongyang.

He then turned to his sister sitting to his left and said ‘maybe I shouldn’t have said [Pyongyang] was far.’

The menu at the dinner consisted of the items carefully chosen to represent both the North and the South. On the menu were John Dory, the favored fish in Moon’s childhood province of Busan, and a Korean take on rosti, the Swiss dish Kim ate while attending school in Switzerland.

The dessert was a mango mousse decorated with the map of the Korean Peninsula.

– Fully implement all existing agreements and declarations adopted so far between the two sides.

– Establish joint liaison office with resident representatives of both sides in the Kaesong industrial zone on their border.

– Actively stage various joint events on special dates in which participants from all levels, including central and local governments, parliaments, political parties and civil organisations.

– Jointly participate in international sports events such as the 2018 Asian Games.

– Endeavour to swiftly resolve the humanitarian issues that resulted from the nation’s division.

– Convene an Inter-Korean Red Cross Meeting to discuss and solve issues including the reunion of families separated by the Korean War.

– Adopt practical steps toward connecting and modernising railways and roads between them on the eastern side of the peninsula as well as between Seoul and Sinuiju, in northwest North Korea.

– Completely cease all hostile acts against each other in every domain including land, sea and air.

– Transform the Demiliatrised Zone into a peace zone as of May 1 by halting all hostile acts and eliminating their means, including loudspeaker broadcasts and the distribution of propaganda leaflets.

– Devise a practical scheme to transform the current Northern Limit Line in the West Sea into a maritime peace zone to prevent accidental military clashes.

– Hold frequent defence ministerial and working-level meetings in a bid to immediately discuss and solve military issues, with the first military talks to be held in May at the rank of general.

– The two Koreas reaffirm and agree to strictly adhere to a Non-Aggression Agreement that precludes the use of force in any form against each other.

– They agree to carry out disarmament in a phased manner, as military tension is alleviated and substantial progress is made in military confidence-building.

– They confirm the common goal of realising, through complete denuclearisation, a nuclear-free Korean peninsula. /// nCa, 30 April 2018 [some quotes and pictures from Daily Mail, UK]