You are here: Home / Archives for Holocaust 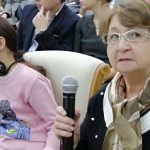 nCa Report Seventy-five years have passed since the day the Soviet troops opened the gates of Auschwitz, ending the Holocaust that had extinguished the lives of six million Jews and eleven million other people. The UN in Turkmenistan in collaboration with the embassy of Israel organized an event on 27 January 2020 to draw attention […]