The former ECO Chairman, the Foreign Minister of the Republic of Turkey, His Excellency Mr. Mevlüt Çavuşoğlu congratulated Turkmenistan for their excellent chairmanship during the year 2021. The Minister said that the Member States should benefit from ECO to have an integrated regional response to challenges like the pandemic and needed economic recovery. During the chairmanship of Turkey, the organization worked towards this goal and at the same time focused on increasing regional trading connectivity, he added. 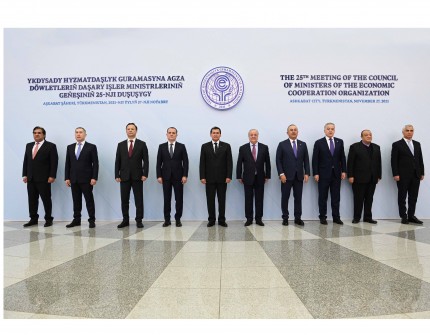 His Excellency Mr. Rashid Meredov, Deputy Chairman of the Cabinet of the Ministers and the Minister of Foreign Affairs in a capacity as Chairman of Council of Ministers (COM) welcomed and extended warm greetings to the honorable Ministers and Heads of Delegation in 25th meeting of COM. While referring to the concept of Turkmenistan’s chairmanship that the country developed to lead the Organization, he emphasized on some key objectives given under their concept that particularly entailed the intensification of investment activities in the Member States, creation of free trade and economic zones, formation of new economic corridors and establishment of partnerships in the field of sustainable energy, including renewable energy sources. H.E. Mr. Rashid Meredov also highlighted that comprehensive support and promotion of cooperation in the fields of science, education, sports, scientific research in the fight against COVID-19 pandemic, as well as expansion of interaction in agriculture, food security and other fields, remained priority for ECO Member Countries. He acknowledged the important role of ECO Secretariat to meet such goals. Moreover, he thanked the ECO Secretary General H.E. Mr. Khusrav Noziri and his team for joint work during the Chairmanship of Turkmenistan and for preparation of this meeting. While highly appreciating the competence and dedication of the Secretariat, he believed that the Secretariat’s team should keep up with the current time and work in accordance with today’s requirements and standards.

The Foreign Ministers/Heads of Delegations in their statements stressed the need of further enhancement of regional socioeconomic cooperation to overcome the impacts of pandemic as well as other current challenges. They desired more intensified collaboration amongst the Member States for creation of free trade and economic zones, formation of new economic corridors, expansion of interaction in fields of sustainable energy including renewable energy sources, science and technology, education, sports, agriculture & food security and tourism.

Ambassador Khusrav Noziri, ECO Secretary General while extending his sincere thanks to the Government of Turkmenistan, especially His Excellency Mr. Rashid Meredov, the honourable Deputy Chairman of the Cabinet of Ministers and Minister for Foreign Affairs of Turkmenistan for hosting the important event and warm hospitality, thanked the honourable Foreign Ministers as well as the heads of delegations for their kind participation in this important meeting.

The ECO Secretary General acknowledged that under the ECO’s Chairmanship of Turkmenistan during 2021 the Organization successfully maintained its momentum and activities to pursue the aims and objectives of the ECO Vision 2025 for greater regional integration. He also thanked the former ECO Chairman His Excellency Mr. Mevlut Cavusoglu, the honourable Foreign Minister of Republic of Turkey for excellently chairing the organization, noting that during Turkey’s chairmanship the ECO experienced a notable progress in the pursuit of its noble goals for the collective socioeconomic developments of the Member States. The ECO Secretary General also congratulated the Republic of Uzbekistan for their upcoming ECO’s Chairmanship in January 2022. Assuring his full support and cooperation, he believed that under Uzbekistan’s Chairmanship the Organization would plow ahead with further advancement to achieve expanded cooperation in the region.

The 25th Meeting of COM concluded its session by adopting several reports regarding the activities of the Organization as well as approved other important documents aimed at further development of the agenda of the organization.///ECO, 27 Nov 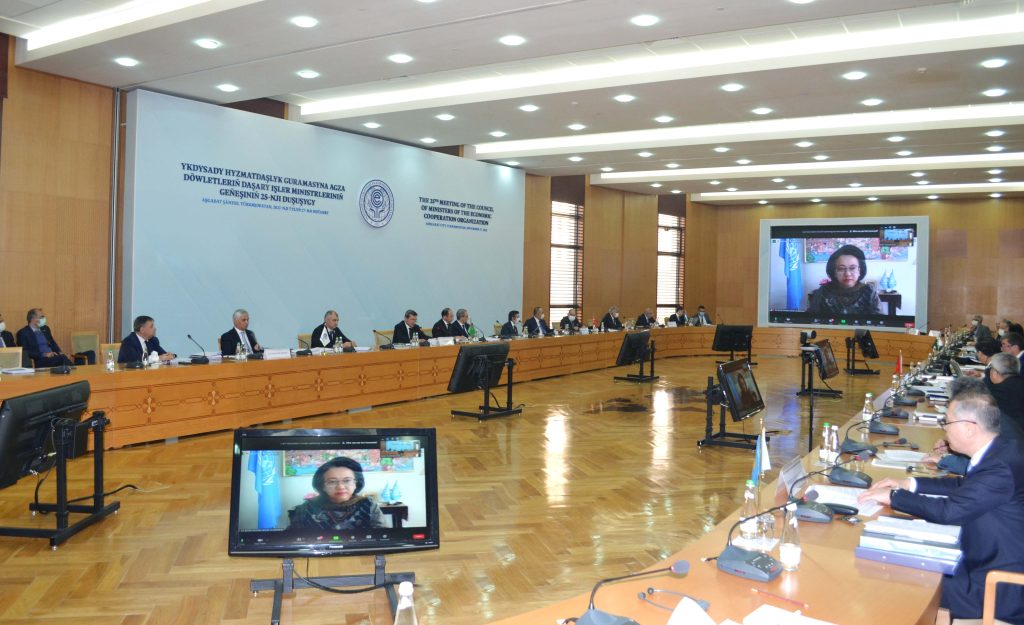 During the Meeting the participants considered the Report of the ECO Secretary General and Recommendations on ECO Regional Projects (2021-2022), where the main economic achievements of the Organization during the reporting period regarding economic efficiency and effectiveness, review of the current projects and programs of the ECO. The Midterm review of the ECO Vision 2025, the issue of the adoption the Charter on establishment of ECO Clean Energy Center, review and approval of Annual Reports of ECO Specialized Agencies, Regional Institutions and Affiliated Bodies were included into the agenda.

Following the results of the Meeting the Council unanimously adopted the Report of the COM Meeting.

In the course of the Meeting a ceremony of signing a number of documents was held including the “Memorandum of Understanding between the Economic Cooperation Organization (ECO) and the United Nations Economic and Social Commission for Asia and the Pacific (UNESCAP) was signed. /// nCa, 29 November 2021