You are here: Home / Articles And Reports / A hotel and a park opened in Ashgabat – GB with cabinet team visits Olympic Village

The new hotel complex was built by the Turkish company Ronesans Holding in three years. The hotel is located at the intersection of A. Niyazov Avenue and Khoja Akhmet Yasavi Street, near the International Airport of the Turkmen capital. The architecture of the hotel, which occupies an area of ​​6.8 hectares, embodies the image of the natural landmark of Turkmenistan – the Karakum desert. The central and two side buildings of the complex, connected to each other, repeat the outlines of the dunes, and the golden color of the stained-glass windows decorating the hotel resembles the color of the sands. The hotel has 87 rooms, including 17 standard, 8 family, 47 deluxe and 15 deluxe, designed for a total of 204 beds. The complex also includes 8 business centers, a banquet hall in the form of a white Turkmen yurt for 500 people, a restaurant for 150 seats, as well as halls for conferences and high-level meetings.

The new hotel will be the venue for the ECO summit, scheduled for November 28. It is the 70th major facility commissioned this year.

After the opening ceremony the president had a meeting with Erman Ilicak, Chairman of the Board of the Turkish company Rönesans Holding, which has built the Garagum hotel complex.

Here is the relevant portion from the TDH report:

Expressing deep gratitude to President Gurbanguly Berdimuhamedov for the high appraisal of the company’s work, Erman Ilycak confirmed the interest of Rönesans Holding in continuing mutually beneficial cooperation with our country on a long-term basis, the desire to continue to participate in the implementation of comprehensive transformation programs initiated by the leader of the nation aimed at innovative development Turkmenistan, strengthening its economic power.

Further, the head of state held a working meeting here with the participation of Deputy Chairman of the Cabinet of Ministers E. Orazgeldiyev, in charge of the agro-industrial complex, and Chairman of the Board of the Turkish company “Rönesans Holding” Erman Ilycak.

As President Gurbanguly Berdimuhamedov noted, in recent years, as a result of the cardinal reforms deployed in the agro-industrial complex, the material and technical base of the industry has significantly strengthened, in which modern management methods and innovations are being introduced.

In this context, issues related to the participation of Turkish partners in the successful solution of the tasks set for the use of water-saving technologies in Turkmenistan, increasing the volume of agricultural crops, and the effective use of advanced scientific achievements in the construction of desalination plants were discussed.

Stressing that it is a great honor for the company he heads to participate in the implementation of the transformations carried out in Turkmenistan, which has earned a reputation as a reliable business partner on the world stage, the businessman again expressed Rönesans Holding’s interest in strengthening its positions in the promising Turkmen market.

Confirming the commitment of Turkmenistan to active mutually beneficial international cooperation, the head of state noted that this is facilitated by the created appropriate regulatory and legal framework.

Then the meeting continued with the participation of the Deputy Chairman of the Cabinet of Ministers Ch.Purchekov. The topic of a thorough discussion was issues related to the construction of new power plants in Turkmenistan and the implementation of joint work in this direction.

As noted, Rönesans Holding, together with Japanese partners, participated in the implementation of projects for the construction of the Marykarbamid plant in Mary velayat, an enterprise for the production of gasoline from natural gas in Ahal velayat, a power plant in Chardzhevsky etrap of Lebap velayat that has no analogues in the region.

Reporting to the leader of the nation on the activities of the Turkish company in our country, the businessman stressed his readiness to implement projects for the development and modernization of the electric power industry of Turkmenistan.

Stating that it is a great honor for Rönesans Holding to be a business partner of our country, where a favorable investment climate and wide opportunities for productive work have been created, the businessman wished President Gurbanguly Berdimuhamedov good health for many years and new outstanding successes in his large-scale activities for the benefit of the Motherland and people.

The same day the Erkin Park was opened. It is located near the Ashgabat International Airport on the section between A. Niyazov Avenue and Amudarya Street, as well as Khoja Akhmet Yasavi and B. Khudainazarov Streets. This was reported by the State News Agency of Turkmenistan. 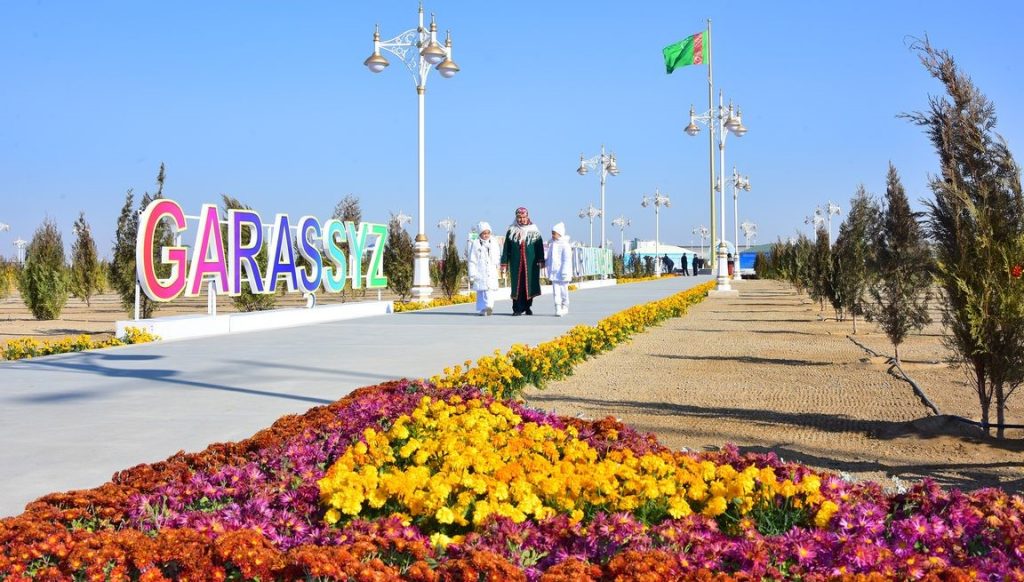 In addition, there are recreation areas, lighting lanterns, and pedestrian and bicycle paths. A cycling track also runs around the park area, and there are bicycles on both sides of the large car park.

The president did not take part in the opening ceremony of this park.

On 20 November 2021, the president and his cabinet team and the members of the national security council visited the Olympic Village where they