You are here: Home / Articles And Reports / Expanded cabinet meeting on the eve of 140th anniversary of founding of Ashgabat 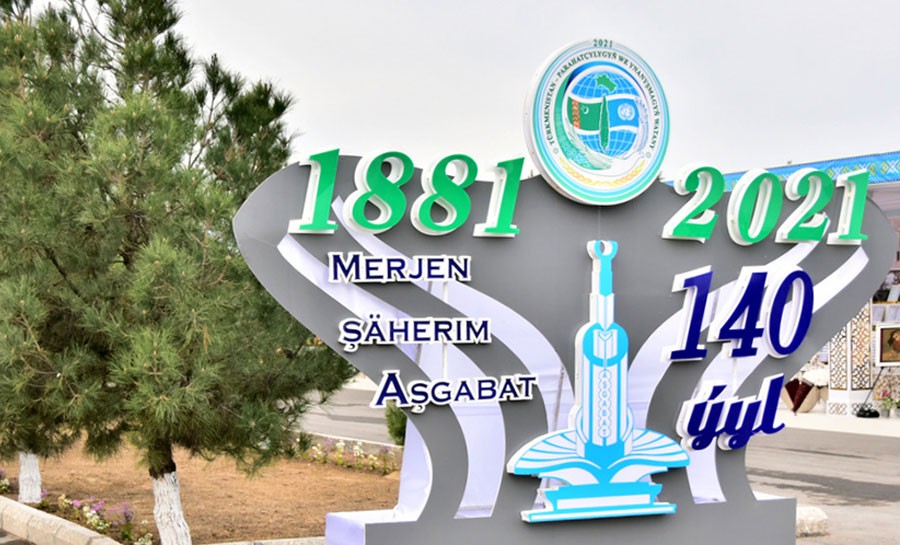 The festivities and celebrations related to the 140th anniversary of the founding of Ashgabat that had been picking pace since the start of the year culminate today, 25 May 2021.

President Berdimuhamedov chaired an expanded session of the cabinet of ministers on 24 May 2021. The central point of agenda was the 140th anniversary of the founding of the capital of Turkmenistan.

The president congratulated the nation on the remarkable transformation of Ashgabat over the year and said that the work will continue to enhance the beauty and prestige of the metropolis.

DPM Durdyliyev (construction, energy with additional portfolio as supervising DPM of Ashgabat) said that the XX International Universal Exhibition “White City of Ashgabat” was taking place, 24-25 May, to highlight the present and future development plans for Ashgabat.

He said that on 25 May the groundbreaking ceremony of a new residential complex in the northern part of Ashgabat will take place. Simultaneously 140 double-storey cottages will be handed to the occupants in the Choganly area of Ashgabat.

DPM Ovezov (transport, communications) reported that 400 Hyundai All New Super Aero City buses (for urban commuter service and for intercity routes) and 200 Toyota Corolla passenger taxis will join the transport fleet on 25 May.

The chairman of the parliament, Ms. Mammedova, informed that according to a freshly passed resolution of the house, President Berdimuhamedov has been conferred with the title ‘Honoured Citizen of the City of Ashgabat.’

DPM Meredov (foreign affairs) reported that relevant work is underway to open in Ashgabat the Representative Offices of the United Nations Office for Project Services (UNOPS), the Food and Agriculture Organization of the United Nations (FAO) and the International Renewable Energy Agency (IRENA).

He said that on May 1, 2020, Ashgabat became a member of the World Federation of Tourist Cities. Within the framework of cooperation with UNESCO, in the second half of this year, it is expected that an appropriate decision will be made on the inclusion of the Turkmen capital in the UNESCO Creative Cities Network in the Design category.

Meredov added that currently, proposals are being prepared to enhance the role of Ashgabat in the regional and international arena. In particular, a National Plan is being developed to strengthen cooperation in various directions between our capital and 11 foreign cities, with which twinning and friendly relations have been established. The issue of Ashgabat’s joining to the international organization “United Cities and Local Authorities” (UCLG) is also being considered. Along with this, opportunities are being studied to create a Volunteer Center in the capital in order to stimulate citizens to a healthy and active lifestyle, and to ensure environmental well-being.

The president said that on 25 May we will start the construction of a new metropolitan area, which will be named “Ashgabat City.”

He signed a resolution on the issues of the Ashgabat City residential complex, which will be built in the north of the capital.

The President said that, in accordance with this document, in order to exercise control over the facilities under construction in the “Ashgabat City” residential complex, a Directorate of under-Construction Facilities is being created under the Ministry of Construction and Architecture.

The president signed an order, announcing the competition for best district in 2021. The winning district will get a cash prize of USD One million.

President Berdimuhamedov issued a message to the youth on ‘Last Bell’ – the last day of the school year. /// nCa, 25 May 2021