You are here: Home / Articles And Reports / How the Aral is saved by Kazakhstan and Uzbekistan 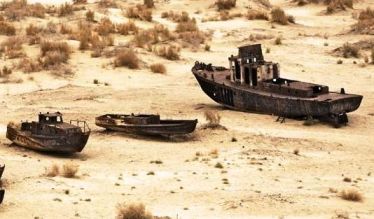 On June 7-8, 2018 an international conference on the topic “Joint actions to mitigate the consequences of the Aral catastrophe: new approaches, innovative solutions, investments” was held in Tashkent.

The purpose of the international conference was to coordinate, in the framework of the International Fund for Saving the Aral Sea, the practical orientation and coordination of activities of the Aral Sea basin countries in solving the problems of the Aral Sea basin, analyzing and evaluating the ongoing programs to mitigate the consequences of the Aral catastrophe and identifying ways of cooperation in implementing projects aimed at improving the environmental and socio- economic situation in the Priaralia region, as well as attracting investments for their implementation. Against this background, it is worthwhile to look at what measures were taken earlier, and the main role in this is assigned to Kazakhstan and Uzbekistan.

The Aral Sea was once the fourth largest lake in the world and provided the economy of the region with thousands of tons of fish every year. However, since the 1960s it has been drying up steadily.

In the 1920s, the leadership of the USSR withdrew the lands of the Uzbek SSR under cotton plantations, which led to the construction of irrigation canals to provide water to crops in the middle of the plateau of the region. These manual, irrigation canals took water from the Amudarya and Syr Darya rivers that fed the freshwater to the Aral Sea. Until the 1960s, the system of canals and rivers did not particularly affect the level of the Aral Sea. However, in the 1960s the Soviet Union decided to expand the canal system and drain more water from the rivers feeding the sea. This led to irreversible consequences, and laid the foundation for the shallowing of the Aral Sea and its drying out. By 1987, it was divided into two parts: northern and southern lakes. In 2002, the southern lake was reduced and divided into eastern and western. In 2014, the eastern lake completely evaporated and disappeared.

In 1991, the Soviet Union collapsed, and Uzbekistan and Kazakhstan remained with the problem of the drying Aral Sea. Since then, Kazakhstan is working to revive the lake, and Uzbekistan is de jure, and de facto expanding the cotton plantations. In addition, a bad joke in the fate of the Aral is now played by a hydrocarbon, large reserves of oil and gas from the Uzbek side of the sea.

But the situation remains serious with the fate of the two southern lakes, Karakalpakstan is experiencing negative consequences as the western lake continues to evaporate.

If earlier the Uzbek part of the Aral was destroyed by cotton, now oil contributes.

In Uzbekistan in 2017, UN Secretary General Antonio Guterres flew in a helicopter and inspected the water area of ​​the Aral Sea that was suffering an ecological catastrophe. The press service of the President of Uzbekistan noted that the UN Secretary General before the trip to Karakalpakia discussed issues of mitigating the consequences of the ecological disaster of the Aral Sea with the President of Uzbekistan Shavkat Mirziyoyev.

Why is there such a difference: in one part, commercial fishing is in full swing and the problem is solved, in the other part so far everything has remained as in the 80’s and 90’s, when the Aral Sea reduced in its water area?

There are several answers to this question.

Kazakhstan specifically dealt with the Aral problem – for this reason it attracted two World Bank loans. The project was called “Regulation of the riverbed of the Syr Darya and preservation of the northern part of the Aral Sea.” The first phase was from 2001 to 2010 and cost 85.79 million US dollars, the second phase began in 2015, the project costs 126 million dollars.

At the same time, complicated talks were held with the Uzbek side in 2014-2015, as they did not support the implementation of the project. This project includes cleaning the delta of the Syr Darya River to reduce water loss, the construction of a dam that allows water to be accumulated in the Small Aral Sea, and fish farming. The Syrdarya river basin, passing through the territory of Kazakhstan and feeding its part of the Aral, is much less populated than the Amudarya river basin, which feeds half of Uzbekistan and Turkmenistan through the Great Karakum Canal. In addition, the volume of cultivation of such water-intensive crops as rice and cotton is small in Kazakhstan, unlike Uzbekistan and Turkmenistan.

Also, the presence of oil and gas deposits on the territory of the delta of the Amudarya River and on the bottom of the Aral Sea plays its role.

Currently, two Russian companies – Gazprom and LUKOIL – are exploring and mining in this area. Since 2004, Gazprom has been working on the Shakhpakhty field in the Kungrad district of Uzbekistan. In April 2004, the Production Sharing Agreement was signed prior to field development (PSA). As a project investor, a consortium was formed in Zarubezhneftegaz CJSC (now ZAO Gazprom zarubezhneftegaz) and GasProjectDevelopmentCentralAsiaAG (Switzerland). In accordance with the terms of the PSA, the investor obtained licenses for the right to use subsoil and for the right to extract and sell gas. Gas production is actively proceeding.

There is also further exploration in the southeast of the Ustyurt plateau. The agreement on the main principles of geological study of the depths of the investment blocks of the Ustyurt region between NHC “Uzbekneftegaz” and OAO Gazprom (since July 17, 2015 – PJSC Gazprom) was signed in January 2006.

Estimation of the total reserves of the region in the category C1 + C2 is about 120 billion cubic meters of gas and about 7 million tons of condensate.

In December 2006, Uzbekneftegaz issued licenses to Gazprom for the right to use subsoil plots to carry out geological exploration work on 7 investment blocks. The total investment in the exploration project is estimated at $ 400 million. In May 2009, the Jel natural gas field was discovered on the Ustyurt Plateau.

“LUKOIL” through its subsidiary LLC “Aral Sea Operating Company” began work in the Uzbek part of the Aral Sea in the framework of the Production Sharing Agreement (PSA), signed in August 2006. As a result of seismic exploration, the West Aral field was discovered with oil and gas reserves confirmed by estimated drilling. The project is being implemented by a consortium of investors in the LUKOIL Uzbekistan Operating Company (LUKO), NHC Uzbekneftegaz and CNPC (China).

At the end of 2015, the construction of a search well on the structure of Meros was completed. Based on the results of this drilling, the geological model of the Western Aral field has been updated, and a decision is expected to continue on the evaluation work.

Meanwhile, against the backdrop of such benefits from the extraction of hydrocarbons, the work on restoring the Aral from Uzbekistan is hard. According to experts, the restoration of the Uzbek part of the Aral Sea will lead to a rise in groundwater in the delta, flooding of drained areas of the bottom, which will complicate any production work for the oil and gas industry. And this in turn will affect the economy of Uzbekistan as a whole.

Thus, between the development of the oil and gas industry and the salvation of its part of the Aral, Uzbekistan has chosen the first. And this cannot but bother, since all attempts to revive the Aral Sea can simply prove to be a fiction, when one country cannot deny itself the benefits of developing hydrocarbons, which impacts on the ecology of the sea.

Measures to increase the flow of water from large rivers cannot be effective either, as the Uzbek side always refers to, pointing to Tajikistan and Kyrgyzstan.

It is impossible to increase the level of the Aral Sea without reconsidering the existing system of water withdrawal from the rivers that merge into the Aral, which goes to watering cotton. It is also necessary to introduce modern water-saving irrigation technology, it’s time to tackle the water waste while watering the fields in the lower reaches of the Syr Darya and the Amu Darya.

And in these issues, the key is Tashkent’s position, which should go to implement effective measures to increase the water level in the Aral Sea, for its part. /// Knews.kg