You are here: Home / Articles And Reports / Kazakhstan under leadership of Nazarbayev

Ashgabat, 28 April (nCa) — President Nursultan Nazarbayev of Kazakhstan has won the elections with 97.7% of cast votes.

While the people of Kazakhstan are happy at the outcome, there are objections from some quarters that there were no viable candidates opposing the incumbent president. 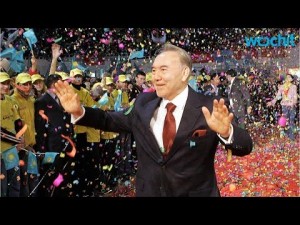 There are a handful of ways to look at this objection.

One, best people, the crème de la crème, are already in team Nazarbayev. It would not be advisable to split the winning team into two or more parts to create artificial opposition just to make the objectors happy.

Two, no one is eternally indispensible but some people can actually be indispensible during a certain frame of time. The time frame is now and the indispensible man is Nazarbayev. His presence at the helm is necessary to overcome the challenge emanating from the greed and deceit of certain power players.

Three, in some jobs, the ability to deliver is more important than the length of tenure. If many more years of good service are left in the man, and if he is willing to devote those years in doing what he does best, let him continue.

The reason why the term limit is set on the top slot is that with the passage of time the man or woman at the top undergoes ‘cocoon effect’ i.e. he or she gets isolated from the real situation because of being surrounded by sycophants, and gets stale in the office. This is not the case with Nazarbayev, who is in touch with the ground realities and keeps coming up with new and relevant initiatives.

The length of time in office should not be a disqualifying factor in itself. A most relevant example is Dr. Mahathir Mohamad, the prime minister of Malaysia for 22 years (1981-2003). Had he wanted, he would have been reelected easily on the strength of his achievements. In fact, if he were to decide to return to active politics today, he would be sure to win hands down.

Kazakhstan is already in the upper middle income countries, with per capita GDP (PPP) of US $ 22466.

The backbone of Nazarbayev’s policy is Kazakhstan-2050, a step by step plan that will propel the country into the top 30 economies of the world, ensuring even distribution of benefits to the population.

His vision is to use the time slot up to 2030 to make fast strides in all areas of economy and life and use the period between 2030 and 2050 to give permanence to the achievements.

The plan is to raise the investments from the current level of 18% Of GDP to 30% and increase the share of non hydrocarbon exports in total exports to 70%. Simply put, Nazarbayev is preparing the country to move beyond the demise of hydrocarbon resources in prosperity.

An important element of Kazakhstan-2050 is the stress on knowledge based economy and promotion of cutting edge technologies. This will be done through seven five-year plans.

[The complete text of the speech of President Nazarbayev, describing in detail the Kazakhstan-2050 can be found here: http://www.akorda.kz/en/page/page_215839_address-of-the-president-of-the-republic-of-kazakhstan-n-nazarbayev-to-the-nation-january-17-2014 ]

If the plans goes as per expectations, Kazakhstan will transform by 2030 into a major export of agricultural, dairy and meat products. It would also become a hub for the regional transport and transit trade.

It is constructive for Kazakhstan and the region that the architect of this vision stays in power for now.