You are here: Home / Articles And Reports / Technology Centre Opened at Techno Park of Turkmenistan

Ashgabat, 14 June 2014 (nCa) — The Technology Centre that is expected to propel Turkmenistan to the frontiers of the cutting edge, innovative and emerging technologies was opened in a colourful and elegant ceremony Thursday (12 June 2014).

Before cutting the ribbon to declare the Center open, President Berdymuhamedov delivered a speech underlining the importance of correlation between science and life.

He asked the scientists to focus on the areas that carry immediate benefit for Turkmenistan and the region such as preservation and enrichment of flora and fauna of Karakum desert and Caspian, technologies to tap the full potential of the Altyn Asyr lake, environmental solutions for the entire Central Asian and Caspian region, innovations in urban planning, road and pipelines construction, effective use of mineral waters and curative muds, and preparations of medicines from plants and herbs found locally. 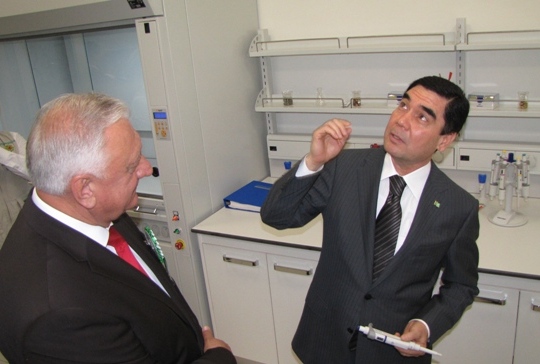 He said that the Technology Centre would help propel Turkmenistan to the forefront of science and technology.

The Centre, built by the Turkish company Polimeks, will work in three main divisions in 10 labs with somewhat overlapping functions. They areas they will focus on are:

There is also an electronic library and a publishing centre.

The centre will provide jobs to more than 200 scientists.

The equipment from world known producers allows for innovation and exploration in bio and nano spheres, analysis of biomaterials and hydrocarbons at molecular and atomic level, and automatic collation and synthesis of the data.

The researchers were trained in Istanbul and Ankara, including the Bilkent University and Kiberparke (The Turkish Techno Park), which Berdymuhamedov visited during his last trip to Turkey.

Outwardly, the first distinguishing feature anyone could see was the name emblazoned in gold letters across the forehead of the building: Tehnologiyalar.

The no-frills directness that is so essential for scientific research was obvious the moment one noticed the name. And it got confirmed in lab after lab as people toured the facilities along with the president.

The researchers in every lab had either submitted their Ph.D. dissertation or were very close to doing it. And, they were all fluent in English, able to explain their complex work lucidly in the layman’s language.

The labs, as per distribution of equipment, were focused on their own core areas but anyone who decided to buy this equipment clearly had in mind the potential of collective and collaborative work of dozens of scientists.

The timing is also of significance.

Turkmenistan revived its academy of sciences in 2009. Had the country opted to open a technology centre right away, it would have been a painful and frustrating exercise because of the dearth of the qualified people to run such a centre.

Now is now. It took five years to prepare a sufficiently large group of suitably qualified people to make the best use of the sophisticated equipment and technology.

Even though the prime minister of Belarus, an academic in his own right, and the director general of WHO, Ms. Margaret Chan, who is a reputable doctor, and the head of the Central Asia-Korea association, were present there, the most significant presence there was of two Nobel prize winners – Professor Negishi Ei-ichi of Japan (chemistry – 2010) and Professor Ms. Ada Yonath of Israel (chemistry – 2009). 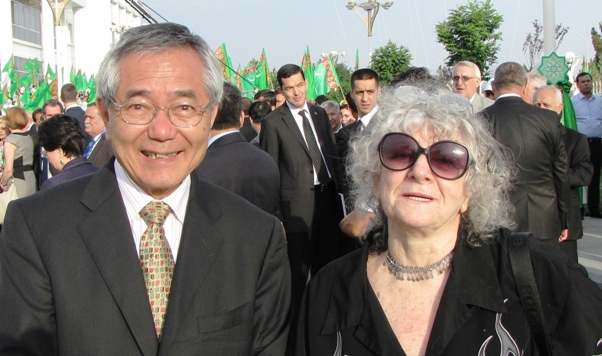 There were also dozens of other well known academics and scholars from several countries, who later participated in the international conference on research related subjects hosted by Turkmenistan.

It was a great honour and unique privilege for nCa to talk to some of them.

The solid confidence that comes with the knowledge that you are one of the best in your field was common to all of them. Also common to all of them was the ability to descend to the level of ordinary person to explain what is taking place at the outer frontiers of science and technology.

All of the scientists nCa managed to speak to in the short period of time, were buoyant that the technology centre of Turkmenistan was sure to start turning in tangible results in the foreseeable future.

A prominent expert in genetics said that he was invited many years ago by Azerbaijan when they wanted to establish their own technology centre. He said that the then-president Gaider Aliyev (the father of the current president of Azerbaijan) spoke at length in one-to-one meeting with him and invited him to help set up the technology center in Baku.

The scientist said that he had to excuse himself politely when Aliyev said that he was willing to grant an annual budget of three million dollars for the centre.

“Three million dollars? For the entire technology centre?,” the genetics expert said in disbelief as he narrated this to nCa.

He said that looking at the kind of money that had been spent to equip the technology centre in Ashgabat, it was obvious that Turkmenistan knows that research is an expensive enterprise.

Another scientist, whose work on blood cells has been noticed worldwide, said that with consistent government support, this centre should be able to secure the future of the country even when they have exhausted their hydrocarbon resrouces.

President Berdymuhamedov, after touring the labs, spoke to a select gathering of top Turkmen scientists, foreign diplomats and heads of international organizations based in Ashgabat. It was a frank conversation.

The president thanked Erol Tabanja, the head of the Turkish company Polimeks for his excellent work in building the centre.

Then, he asked Dr. Muhammedovez Gurbanniyazov, who has been appointed the director of the centre if he wanted to say anything.

The president said that the government will initially support the centre but it should eventually become a self sufficient entity, able to fund itself by selling its products and solutions to the commercial sector.

Gurbanniyazov again repeated that even though the centre would try to generate its own revenues as soon as possible, it was necessary for the government to stay to maintain its support for as long as it might take, which would not be any time soon anyway.

The president agreed to that but added that the centre should be able to show some measurable output periodically.

After reassuring the academic community of his full support for the centre, the president outlined the areas where he expects some results quickly. He also instructed his cabinet members, who were present in the hall, to provide all possible support to the centre without any delay.

The first task, he said, was to identify as to why some neighbouring countries can sell their products but Turkmenistan cannot. He said that the centre should study and find the flaws in the production and quality and propose measures to boost industrial exports of Turkmenistan.

He said that proposals should also be developed for the most rational use of the hydrocarbon resources and to obtain optimum benefits from their exploitation and export.

He said that the research work being carried out in other institutions in the country should be in synch with the centre – no one should work in isolation. Coordination, he said, is the watchword here.

The president said that together with boosting our exports, we should start decreasing our dependence on imports in certain areas.

Stressing the need of innovative work in nanotechnologies, biotechnologies, food technologies, technologies related to geography, information and telecommunications, energy saving and alternative energy technologies, Berdymuhamedov said that the scientists should contribute to the betterment and fortification of the agro-tech, pharmaceuticals, mineral processing, biotech, food processing, seismological and weather forecasting, and all other sectors where technology gives an edge to the country.

Techno Park, of which the core is the Technology Centre opened Thursday, is an idea that has been embraced by many countries.

Variously known as Science Park, Research Park or Technology Park (Techno Park), the entity such named comprises of clustered efforts and resources to spearhead innovation and push forward the frontiers of science and technology.

Many of the techno parks in the world are owned and run by the private sector but the model preferred by Turkmenistan is where the government provides the umbrella infrastructure and essential funding.

After initial funding from the government, the techno parks typically become self sufficient once they manage to develop some commercially attractive solutions.

Of the some 198 countries in the world, only a few dozen have their own techno parks.