Home » Álvaro, Vicente del Bosque’s son with Down syndrome, an example of self-improvement

One of the most touching moments of the celebration after the Spanish victory in the Football World Cup in South Africa was when Álvaro, the son with down syndrome of the coach Vicente del Bosque, lifted the World Champion’s Cup. “My son has changed my life” has stated del Bosque on several occasions.

The coach’s calm personality was known to all, both inside and outside the football field, as well as his habit of staying always in the background. But not everyone knows for a fact that the humble and warm personality of the Spanish coach has one main reason.

“At first it was very hard, I said to myself why this going to affect me and not another. A situation like that at home makes you put things into perspective. It makes you more sensitive. It gives us peace of mind. It is a blessing for all”, said the coach. 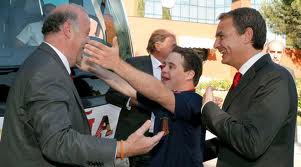 The desire to prevent kids born with genetic disabilities is leading to a progressive use of prenatal diagnosis. If it detects an anomaly, it often leads to abortion. An example of this is the witness reported by “The Guardian”, when the British newspaper announced the results of a scientific research of the University of Cambridge.

Some consider that these data serve to support the independence of young pregnant women. Others wonder whether we are using prenatal diagnosis as part of a screening operation that will lead to the devastation of the physically or mentally unable. What values are at stake in the genetic analysis before birth? Respect for human existence, both individually and collectively. Respect for the disabled mortals.

For very hurtful that the question is, we must raise it: Have we thrown into a tracking task that seeks the annihilation and extinction of some groups of mortals, such as those suffering with Down syndrome, those with brain or physical diseases?

“My mother went to the doctor in her second month of pregnancy. The doctor ordered the termination of pregnancy, but my mother refused. Seven months later I was born. Today, in 1824, in Vienna Kärmerton has the premiere my ninth symphony, my personal song to the joy of life”, said Ludwig van Beethoven.

Author and journalist Clemente Ferrer has led a distinguished career in Spain in the fields of advertising and public relations. He is currently President of the European Institute of Marketing. clementeferrer3@gmail.com