Ashgabat, 29 May 2011 (nCa) — President Hamid Karzai of Afghanistan is on official visit to Turkmenistan, 28-29 May 2011. On the first day of his visit the presidents of both the countries held tête-à-tête for more than three hours.

Five bilateral documents and a joint communiqué were signed on completion of expanded format consultations.

The dialogue covered the entire spectrum of mutual relations. The peace process in Afghanistan featured prominently.

Turkmenistan agreed to build a 150-km railway line to connect its northeastern tip with the Andkhoi town in Afghanistan. The arrangement for increasing the supply of electricity fivefold, to ultimately cover the 70% consumption of Afghanistan, was also formalized. Both the countries will engage in deeper partnership in media, culture and arts. The chambers of commerce of both the countries will interact directly and regularly.

The presidents addressed a brief press conference after the signing ceremony of documents. 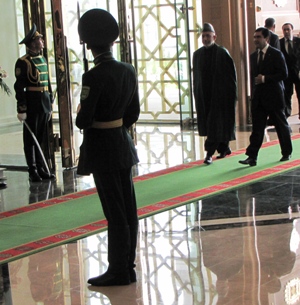 In anticipation of the withdrawal of US and NATO troops, Afghanistan has initiated a national reconciliation process. The Afghan High Peace Council (AHPC), led by former president of Afghanistan, Professor Burhahuddin Rabbani, is spearheading the arduous and uphill task of bringing all the parties to the table. There is a general consensus among Afghans that Taliban must be included in the talks. The peace council draws its legitimacy from the peace jirga that was held last year.

The Karzai visit is basically in bilateral format but, as was inevitable, the peace process occupied considerable space in talks.

Waheed Omer, the official spokesman of President Karzai, told in an exclusive talk with nCa that peace process is not the central point agenda but it would certainly be discussed.

“President Karzai would like to brief his counterpart on the progress that has been made so far,” he said.

President Karzai, speaking during the expanded format talks, said that the US and NATO troops would start leaving Afghanistan this year and their withdrawal would be completed by 2014.

He said that Afghanistan will take control of 6 provinces from NATO this year.

Karzai explained that Afghanistan and Pakistan were engaged in a sub-process for peace building. He assured that interests of all neighbours would be protected.

President Berdymuhamedov, answering a question by RIAN, threw some light on the peace process.

“We have our own strategy – in principle, we have to create the atmosphere to bring all factions to talks. [Peace would only come] through the diplomatic channels and peaceful means, through the UN and its specialized agencies that are capable of handling this process,” said Berdymuhamedov.

He underlined, “The way out of this crisis is only through negotiations, through [the UN organs such as] UNRCCA and UNAMA.”

The Turkmen president said that one should also keep in mind the outcome of Kabul and London conferences.

He reminded that inter-Afghan dialogue was very important and it should only be led by the Afghan people.

“We, as responsible members of the international community, can only facilitate this dialogue,” he said.

Although no one spoke openly about any positive or negative role of the United States in the ongoing peace process in Afghanistan, there was the unity of opinion that no one has the right to interfere in the peace building efforts.

Several very senior officials from both Turkmen and Afghan sides, speaking on the condition of anonymity, said that Americans seem to have learned the hard way that there was no alternative to negotiations, and that a lasting peace would not be forthcoming without inclusion of Taliban.

A top official from the Afghan side told nCa that the peace process was purely an Afghan undertaking. While we appreciate support from all sides, no one should try to derail this process.

TAPI (Turkmenistan-Afghanistan-Pakistan-India gas pipeline project) that envisages pumping some 33 billion cubic meters of Turkmen gas annually to Afghanistan, Pakistan and India was, quite naturally, an important part of agenda.

President Berdymuhamedov, answering a question by AFP during press conference, spoke at length about TAPI.

He said that a new audit report about gas reserves of Osman-Yoloton field, scheduled to be released [by Gaffney, Cline & Associates of UK] mid or end June 2011, will show that there was more than enough gas to supply any volumes to any buyer.

“The joint implementation of this project by the four [participating] countries will benefit all,” he said.

The Turkmen president said that TAPI had acquired support from many countries and financial institutions. The security issues are also being addressed, he said.

Berdymuhamedov said that Afghanistan will get US $ one billion in transit fees.

[Editor’s note: It is not clear whether Berdymuhamedov was speaking about annual transit fees Afghanistan will get for letting the gas pass through its territory onward to Pakistan and India or something else. If the transit fee alone through Afghanistan would amount to US $ one billion annually, it would alter the final price for both Pakistan and India considerably. Ed.]

Berdymuhamedov said that TAPI would create 12000 jobs for Afghanistan. He added that in his talks with Karzai, he had learnt that TAPI could even generate 50000 new jobs in Afghanistan.

The following documents were signed after the talks:

There have been some recent reports in the Afghan media that Mulla Omar, the spiritual leader of Taliban, had been killed.

“Afghanistan is not in a position to confirm or deny these rumours,” said Waheed Omer, the official spokesman of Karzai.

“All we can say is that he has moved or has been moved from his last known position and since then he is not in touch with anyone,” he added.

Karzai is accompanied by a heavyweight delegation of 35 senior officials including six ministers.

The official spokesman of President Karzai, Waheed Omer, and his personal assistants are also in the delegation.

Hamid Karzai and his delegation will travel to Avaza, the national tourist zone of Turkmenistan at the Caspian coast in the second half of 29 May. They will stay for short private rest on 30 May before flying onward to Italy.

It may be a coincidence that Turkish President Abdullah Gul is also coming to Turkmenistan for an official visit on 30 May and he will also stay in Avaza.

It is worth remembering that Turkey has offered to host Taliban office on its soil.