On Friday, 20 January 2023, the Prime Minister of Russia Mikhail Mishustin met with President of Turkmenistan Serdar Berdimuhamedov and Chairman of the Halk Maslahaty Gurbanguly Berdimuhamedov.

“We see in the Russian Federation not only our strategic partner, but also our closest friends, a friendly country. Recently we celebrated the 30th anniversary of our diplomatic relations,” Gurbanguly Berdimuhamedov said, welcoming Mishustin. 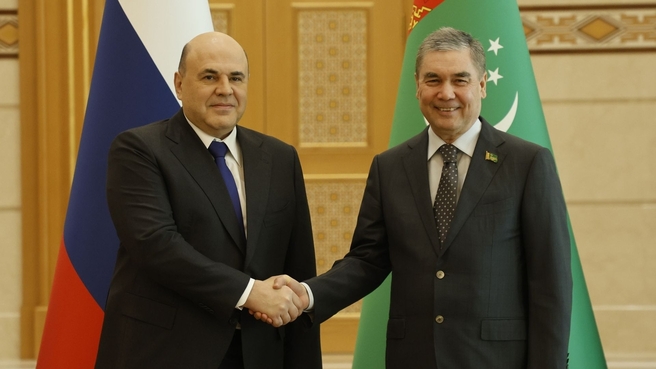 Speaking about trade and economic cooperation with Russia, the head of the Halk Maslahaty mentioned the intergovernmental commission on economic issues.

“Geoeconomics and geopolitics are changing today, so we need to find the right units of measurement between us – and for this we have solid experience – to find good ways of contact on these issues. Therefore, I would like our intergovernmental commission to work on cooperation issues in this direction,” he stressed.

In turn, Prime Minister Mikhail Mishustin thanked Gurbanguly Berdimuhamedov for his great attention to the development of Russian-Turkmen relations.

“I would like to say that in the trade and economic sphere, which we are very actively engaged in, we are preparing projects, we have a number of areas that you, dear Gurbanguly Myalikgulyevich, have mentioned. Of course, it is impossible not to mention our projects in the field of energy, industry, digital, transport, cultural and humanitarian fields,” he said.

Mishustin also drew attention to the fact that 60 subjects of the Russian Federation have trade, industrial, economic, cultural relations with Turkmenistan.

“And the heads of three regions came here – the President of Tatarstan, who traditionally works and have friendship with his Turkmen colleagues. Astrakhan region takes an active part, St. Petersburg, their representatives are also here,” he said.

During the meeting, issues of humanitarian interaction were also discussed. Arkadag said that this year, at the initiative of the President of Turkmenistan, the parties intend to lay the foundation of the Turkmen-Russian university.

Cooperation in the field of sports is very promising, taking into account that Turkmenistan has a good material and technical base for hosting competitions in various sports up to the level of the World Championships.

“This year was declared the Year of Youth by the esteemed President, and under this auspices we could do a lot in matters of sports development,” Gurbanguly Berdimuhamedov noted.

Meeting with the President of Turkmenistan

After the one-on-one meeting, President Serdar Berdimuhamedov and PM Mishustin continued negotiations in an expanded format. 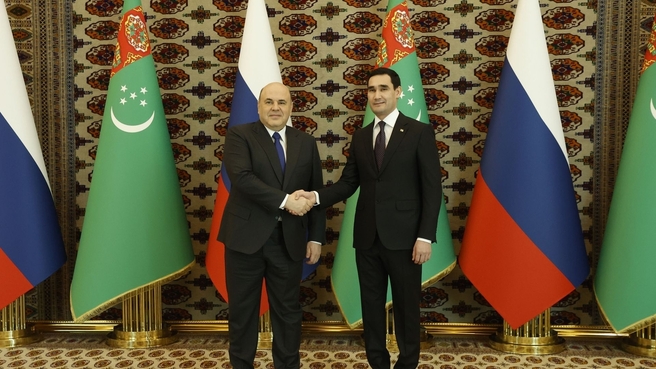 On the Turkmen side, the meeting was attended by Deputy Prime Ministers Rashid Meredov (foreign minister), Batyr Atdayev (trade), Nurmukhammet Amannepesov (health, education, science, sports), Director General of the Agency for Transport and Communications under the Cabinet of Ministers of Turkmenistan Mammetkhan Chakiyev.

“Turkmenistan pays great attention to cooperation with the Russian Federation. There is a high level of political, diplomatic, trade, economic, cultural and humanitarian cooperation between our countries,” the Turkmen leader said, opening the meeting.

Mishustin said that Russia considers the expansion of mutual trade relations, trade and economic cooperation with Turkmenistan as a key task. 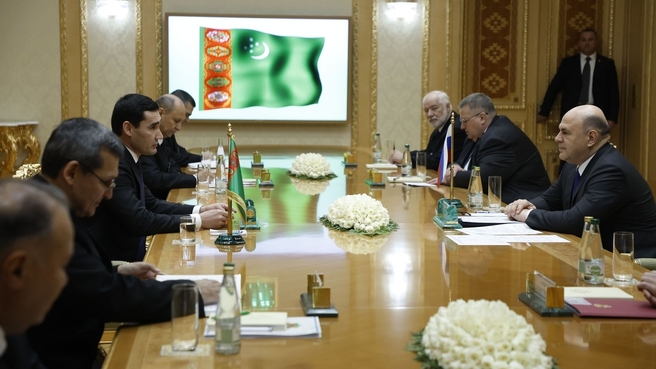 The Russian PM recalled that today the trade turnover between the two countries is estimated at US $ 1 billion, but the potential of bilateral relations is much greater.

“Traditionally, we cooperate in the field of energy, oil and gas industry, together we are engaged in construction, agriculture. There are many developments in the field of digital technologies. Of course, it is necessary to expand the scope of the mutual agenda, which the Government will do on the basis of the Declaration on Deepening Strategic Partnership, which you, dear Serdar Gurbangulyevich, signed with Russian President Vladimir Vladimirovich Putin on June 10 in Moscow,” Mishustin said.

During the Turkmen-Russian negotiations, the following documents were signed:

Signed by: Deputy Minister of Internal Affairs of the Russian Federation Alexander Kravchenko and Chairman of the State Migration Service of Turkmenistan Nazar Atagarayev.

Signed by: Ilya Shestakov, Head of the Federal Agency for Fisheries, and Mukhammetgeldy Serdarov, Minister of Finance and Economy of Turkmenistan.

Signed by: Deputy Head of the Federal Service for Veterinary and Phytosanitary Surveillance Yulia Shvabauskene and Minister of Agriculture and Environmental Protection of Turkmenistan Allanur Altiyev.

Signed by: Vice-President of the Russian Academy of Sciences Stepan Kalmykov and Minister of Agriculture and Environmental Protection of Turkmenistan Allanur Altyev.

Signed by: Deputy Head of the Federal Agency for Youth Affairs Denis Ashirov and Minister of Education of Turkmenistan Gurbangul Atayeva.