Highlights of the second day of Turkmen parliamentary delegation visit to Russia:

Opening the meeting, the Council’s speaker Valentina Matvienko stressed that Gurbanguly Berdimuhamedov is a true friend of Russia, who gives a lot of effort and energy to the development of Turkmen-Russian relations. “Many landmark projects are inextricably linked with his name, which have made it possible to strengthen the multifaceted ties between our countries,” she said.

At the beginning of his remarks, Gurbanguly Berdimuhamedov conveyed the greetings from President Serdar Berdimuhamedov. “He values your ongoing commitment to the development and strengthening of bilateral ties”, he said.

The main topic of Gurbanguly Berdimuhamedov’s speech was the prospects for enhancing bilateral parliamentary ties, including in the international arena. “Close and proactive interaction of lawmakers is an essential and integral part of the development of comprehensive cooperation between Russia and Turkmenistan”, he underlined. 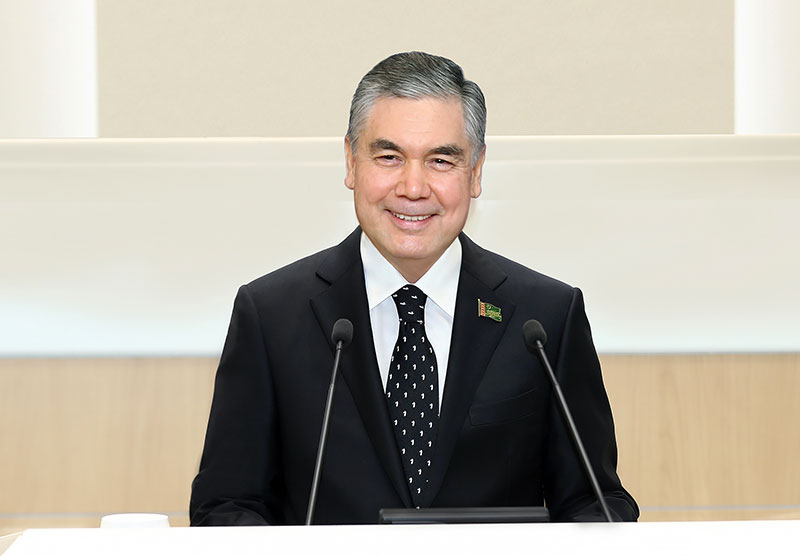 According to him, a lot has been done in recent years. Delegations are exchanged frequently, a steady dialogue has been established, and professional communication mechanisms have begun to function.

Speaking about the Interparliamentary Commission on Cooperation of the Federation Council and the Halk Maslahaty of the Milli Gengesh of Turkmenistan, Gurbanguly Berdimuhamedov noted the timeliness of its creation.

“Turkmen-Russian parliamentary ties make a significant contribution to strengthening peace and stability in the regional and global dimensions. The participation of our parliamentarians in the work of international forums is aimed at creating favorable legal prerequisites and conditions for the successful course of political, economic, humanitarian cooperation, their work enriches traditional methods of diplomatic activity”, Berdimuhamedov continued.

He also stated that parliamentary diplomacy enables effective resolution of various issues through political and diplomatic means and methods.

He expressed the conviction that parliamentary diplomacy is designed to contribute and give a positive impetus to the entire global political agenda and prevent the erosion of internationally recognized legal norms, provisions of the UN Charter, core treaties and conventions.

The head of Halk Maslahaty stressed the active cooperation of the two countries’ legislators on the platform of the Inter-Parliamentary Union. He urged both sides to consistently increase cooperation and set priorities in accordance with traditional values and fundamental attitudes shared by the two peoples.

“Populism, the pursuit of short-term political gains, and blind imitation have never served the state or society well in the long run. At the same time, it is not necessary to isolate oneself from truly useful practices and experience of international parliamentarism and lawmaking, but rather to adopt the best and proven by life”, he stressed.

In his opinion, collaboration through the CIS Interparliamentary Assembly is of great importance. “This is a promising direction. I am sure that the parliamentarians of Russia and Turkmenistan should take joint initiatives on this platform, first of all, in strengthening the legal framework of cooperation between the CIS member states.”

Gurbanguly Berdimuhamedov also mentioned activities of the regional and interregional forums among the effective forms of interaction. As an example, he cited the Forum of Central Asian Countries and Russia held in May and the Dialogue of Women of Central Asia and Russia.

One of the important directions of the strategic partnership between Turkmenistan and Russia is trade and economic cooperation, Chairman of the Halk Maslahaty stressed. He noted the positive growth of bilateral trade, the expansion of export-import operations, the implementation of large-scale projects.

The main areas of cooperation are energy, transport, high technology, agriculture. “We have always advocated for strengthening trade and economic ties, raising them to the level of a multifunctional economic partnership, with investment, financial, and technological components playing a key role,” Berdimuhamedov said.

Among the tasks that both sides must complete today to activate Turkmen-Russian economic ties, he listed the adoption of new laws governing modern economic relations, reasonable and balanced harmonization of national legislation in this area, timely ratification of bilateral economic agreements, and mutual consideration of economic cooperation issues at the parliamentary level.

Touching upon the cultural and humanitarian ties between the peoples of the two countries, the head of the Halk Maslahaty noted their deep history, common civilizational roots, ideological attitudes, traditions and customs. “It is through culture, art, science and education that we will be able to enrich the content of our partnership,” he added.

“The Russian language is taught in all secondary and higher educational institutions of the country. We are working on the design and construction of the Russian Drama Theater in Ashgabat, we are discussing the creation of a Turkmen-Russian University,” Berdimuhamedov said.

He also expressed gratitude for the preserving of the image of the great Turkmen people, philosopher, thinker and poet Makhtumkuli in monuments, sculptural compositions, names of institutions on the territory of Russia. As known, poet’s tercentenary will be celebrated in 2024,

Berdimuhamedov suggested that close inter-parliamentary cooperation on cultural and humanitarian issues be considered, the content of which can be outlined in a medium-term comprehensive program.

“We have common goals – peace and development, the growth of the welfare of citizens, the creation of conditions for the maximum disclosure of human potential. And of course, further strengthening of the ties of good neighborliness, friendship and cooperation between the peoples of Turkmenistan and Russia,” the head of the Halk Maslahaty stressed.

Opening the meeting, Volodin noted that this is the first ever visit of the Chairman of the Parliament of Turkmenistan to the State Duma. As President Gurbanguly Berdimuhamedov visited the State Duma in 2009. 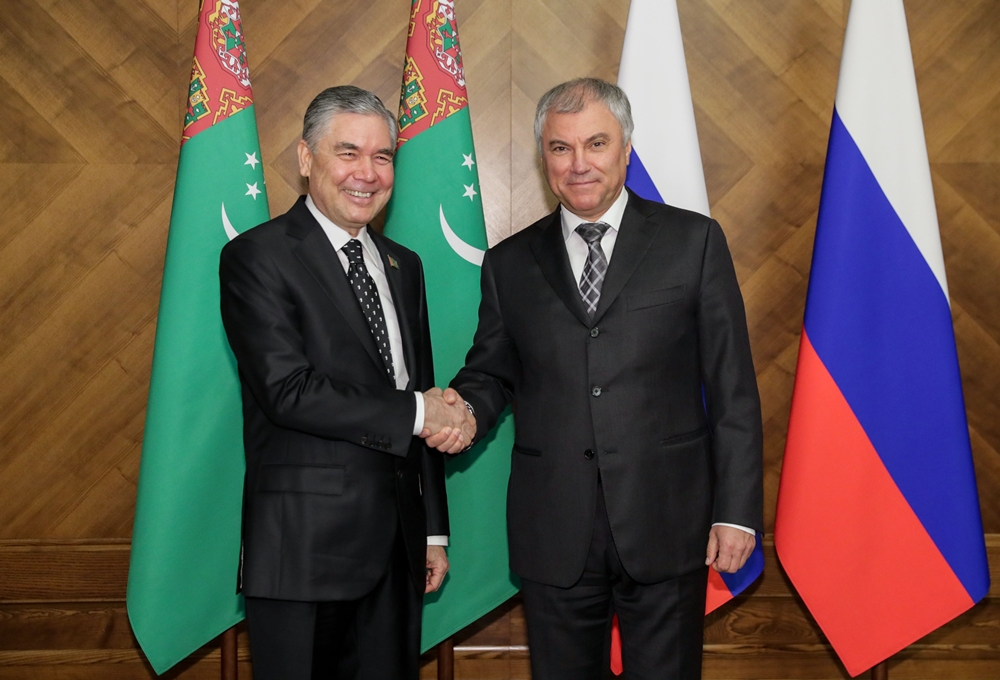 The Chairman of the State Duma praised Gurbanguly Berdimuhamedov’s vast experience and his friendship with Russian President Vladimir Putin, which are the key to close contacts and mutual understanding between the two countries.

Volodin invited Gurbanguly Berdimuhamedov to take part in a meeting of heads of parliaments of the Caspian region countries to discuss key issues of interregional cooperation.

“The plans, if you support, are to meet in the format of a meeting of the chairmen of the parliaments of the Caspian Sea basin countries next year in Baku to discuss the development of relations within the parliamentary dimension,” he suggested.

Gurbanguly Berdimuhamedov supported the initiative of the Chairman of the State Duma and Azerbaijani colleagues. “This is a very correct approach. We need to specify our formats of work, the legislative framework,” he added. 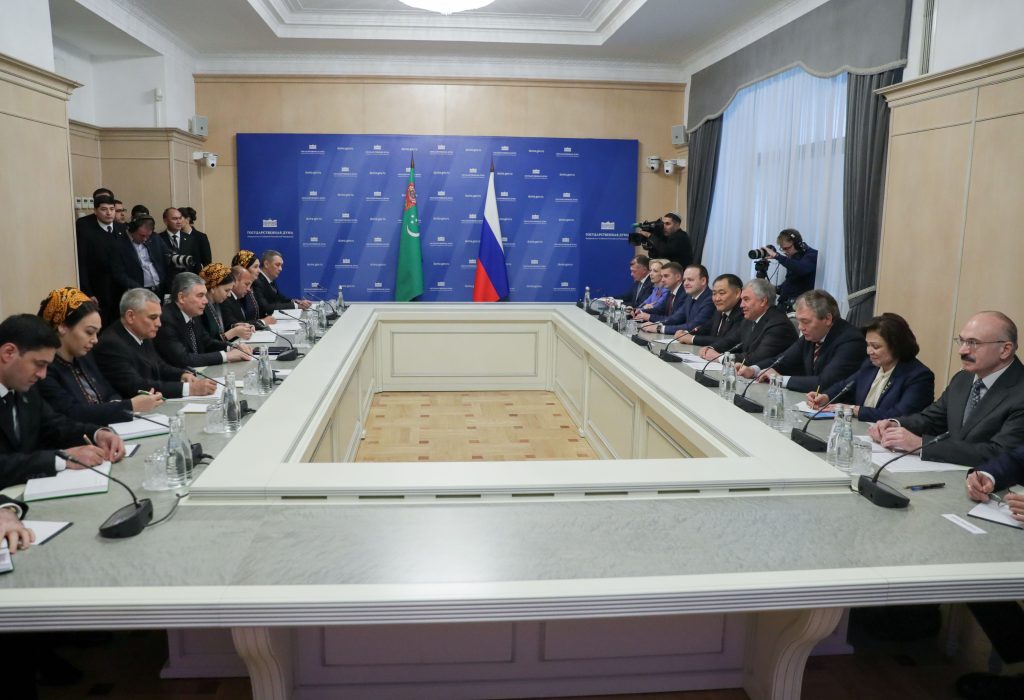 At the meeting, Gurbanguly Berdimuhamedov noted that much attention is paid to the Russian language in Turkmenistan, “starting from kindergarten and ending with university.” He said that by the decision of the presidents, the foundation of the Turkmen-Russian University will be laid in Turkmenistan next year.

“We would be happy to inaugurate a new university together with you next year. Here we need your help in studying legal issues, as well as what faculties, directions, specialties are needed,” he said.

As Kosachev noted, Russian-Turkmen interparliamentary cooperation is becoming as active, regular and productive as possible. 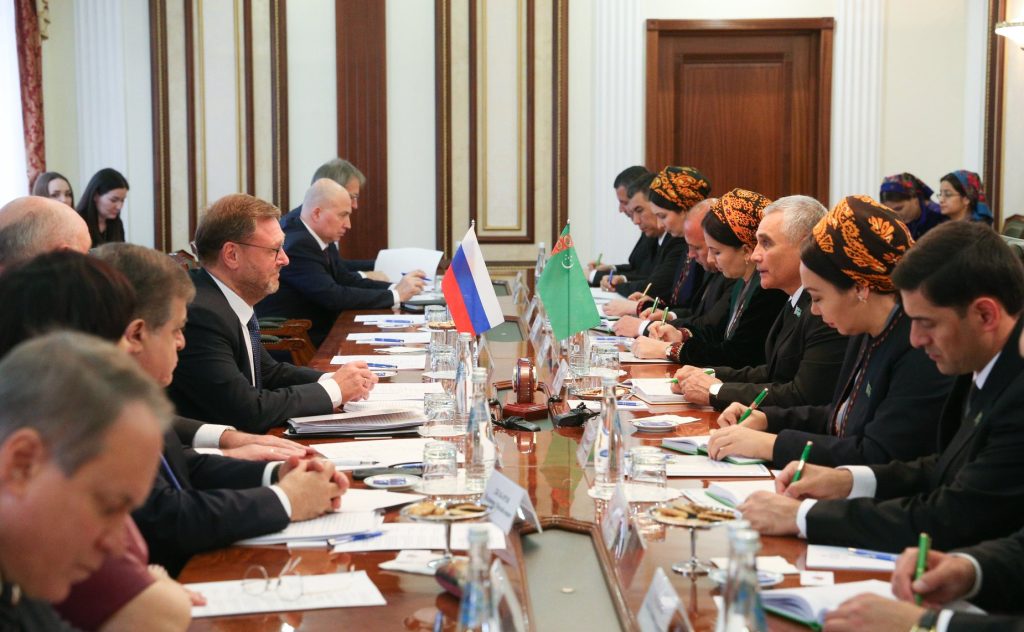 This is evidenced by the Agreement signed on 1 November on the establishment of the Interparliamentary Commission for Cooperation of the Federation Council of Russia and the Halk Maslahaty of Turkmenistan.

He stressed that the Federation Council inks such agreements only with the closest and most important partners.

Babayev, for his part, noted Turkmen lawmakers’ interest in exchanging legislative experience with Russian colleagues in order to effectively implement the agreements reached by Russia and Turkmenistan’s heads of state.

During the meeting, the formats of future joint work within the framework of the Inter-Parliamentary Commission were considered.

On Tuesday, 2 November, Chairman of the Committee on International Affairs of the upper house of parliament of Turkmenistan Myahri Byashimova and Chairman of the Committee on international and interparliamentary relations of Parliament’s lower chamber Merdan Tuvakov held a round table with their colleagues from the Federation Council on the topic “Interparliamentary cooperation of Turkmenistan and Russia: direction and priorities”. 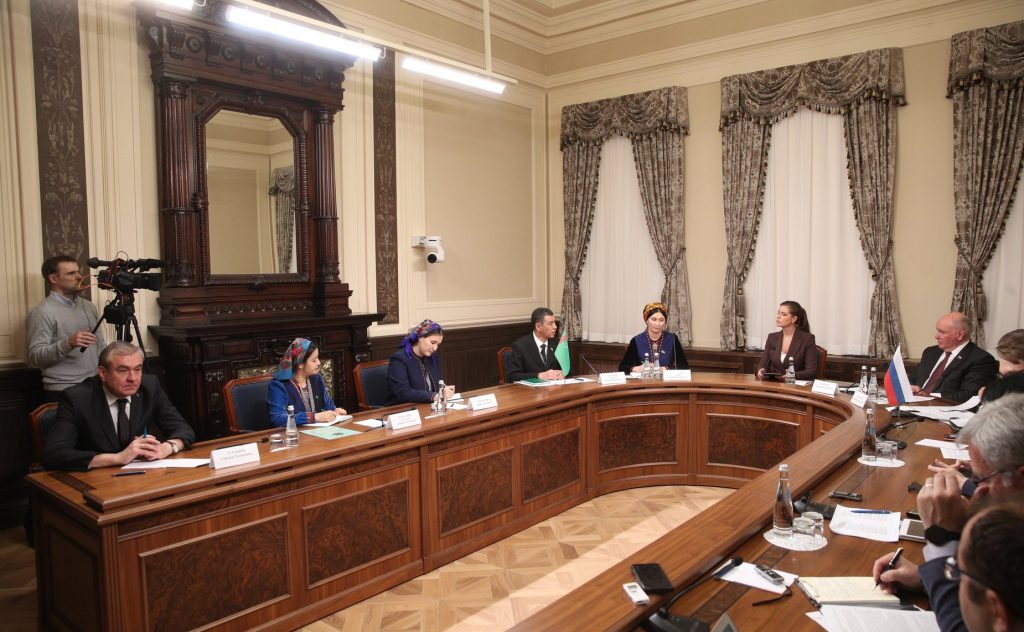 Chairman of the Federation Council Committee on international affairs Grigory Karasin expressed confidence that Russia and Turkmenistan will continue close coordination, taking into account the strategic nature of bilateral relations.

He also stressed that the Russian side pays great attention to the Turkmen initiatives at the General Assembly. In particular, Russia supported the resolution initiated by Turkmenistan “On the zone of peace, trust and cooperation in Central Asia” and considers it a timely document that fully meets the trends regional interstate relations.

According to the First Deputy Chairman of the Committee Vladimir Djabarov, Russian parliamentarians highly appreciate Turkmenistan’s policy of neutrality, its independent foreign policy.

He also stressed the role of Turkmenistan in the development of cooperation between parliamentarians of Central Asian states. “This is evidenced by the first Interparliamentary Forum of Central Asian and Russian countries held in Ashgabat in May 2022. The Russian side supports the initiative put forward by Gurbanguly Berdimuhamedov to create a permanent secretariat of the Forum,” he said.

Merdan Tuvakov believes that new opportunities are being created to boost the Turkmen-Russian inter-parliamentary cooperation. He noted the great interest of the parliamentarians of the two countries in expanding cooperation.

According to Myahri Byashimova, relations with the Russian Federation are among the priorities of Turkmenistan’s foreign policy. ///nCa, 3 November 2022