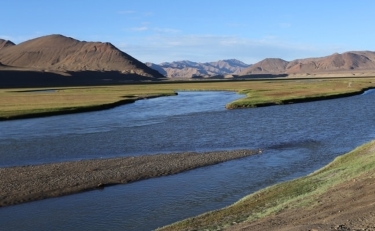 Following the Turkmen-Uzbek summit talks hosted by Tashkent in July 2022, a landmark agreement was signed on the management, protection and rational use of water resources of the Amu Darya River.

The State Committee of Water Resources of Turkmenistan told about the background of the conclusion of this agreement in a comment for the newspaper “Neutral Turkmenistan”.

According to experts, the document was the result of the work of the Intergovernmental Commission on Water Management Issues and will ensure more rational exploitation of the Amu Darya, which is the main irrigation artery of Central Asia.

As known, a joint Turkmen-Uzbek Intergovernmental Commission on Water management issues was established in May 2021. On 9 September 2021, the first meeting of a group was held in Tashkent, the second one was hosted by Dashoguz on 1 July 2022.

It should be recalled about the activities of the Interstate Coordinating Water Management Commission as part of the International Fund for Saving the Aral Sea, where Turkmenistan actively participates. This format meets twice a year and resolves water allocation issues for each agricultural growing season.

The work of the Intergovernmental Turkmen-Uzbek Commission on Water Management Issues will complement and strengthen the practical solutions of the ICWC. Its activities are conducted in a more analytical, research, management and coordination manner.

During the second session of the intergovernmental commission, many possibilities were discussed on improvement of the operation of the Turkmen-Uzbek section of the Amu Darya. The sides talked about hydraulic facilities, in particular, the Tuyamuyun (Duemuyun in Turkmen) interstate water-engineering complex, which includes four interconnected reservoirs and a number of channels on the lower Amu Darya River bordering Turkmenistan and Uzbekistan. They discussed the problem of siltation of its inlet and outlet parts, material and technical costs for repair and reconstruction.

What was considered for future implementation? Shore protection, cleaning, riverbed straightening works. Attention was focused on the introduction of methods and technologies of modern water accounting, the use of advanced devices. In general, the two countries intend to replicate the use of digital technologies to all water resources in the Central Asian region.

The main thing for the two countries remains the rational, efficient use of the waters of the Amu Darya, the flow rate of which fluctuates according to observations of recent years. At the same time, the agricultural sector of the two countries, leaders in cotton production, directly depends on the fullness, sufficiency, and power of the river.

Many thousands of hectares of farmland on both sides of the Turkmen-Uzbek border also require water.

In order to assess the current state of the waters, an analysis of the flow rate of the Amu Darya over the past decades, an inventory of the state of hydraulic structures is conducted. These aspects and much more formed the basis for a new bilateral water agreement, which has already been recognized as a fresh step for regional water use.

According to analyses, the runoff of the Amu Darya and Syr Darya, and in general, waters in Central Asia has declined over the past half century, which has become a reason to think about ensuring the stable development of the food and energy sectors that need water and this requires urgent joint measures.

This situation determined the need to develop and sign an agreement on the management, protection and rational use of water resources of the Amu Darya River between Turkmenistan and Uzbekistan. ///nCa, 5 August 2022