Today, on March 30, 2022, a solemn ceremony to hand over the last batch of medical equipment purchased under the project “Enhancing the Healthcare System of Turkmenistan through the Provision of Medical Equipment ” was held at the Ashgabat Emergency Aid Centre. The ceremony was attended by the Ambassador Extraordinary and Plenipotentiary of Japan to Turkmenistan H.E. Mr. Yamamoto Hiroyuki, who was representing donor, UN Resident Coordinator in Turkmenistan Mr. Dmitry Shlapachenko, UNOPS Project Manager in Turkmenistan Mr. Vasyl Tolkachev as a representative of the project implementer and the Deputy Minister of Health and Medical Industry of Turkmenistan representing beneficiary-country Mr. Chary Agamyradov.

As the Ambassador of Japan noted in his address in the framework of this Project in the amount of 2.8 million dollars modern medical equipment that meets all international quality standards, including X-ray machines, ICU ventilators, ultrasound machines, bronchoscopy systems were acquired. In cooperation with the Ministry of Health and Medical Industry of Turkmenistan purchased medical equipment has already been installed in more than 50 medical centers throughout the country, in particular in Ashgabat, regional centers and districts. At the same time, relevant trainings have also been provided to medical personnel to ensure its further effective operation. 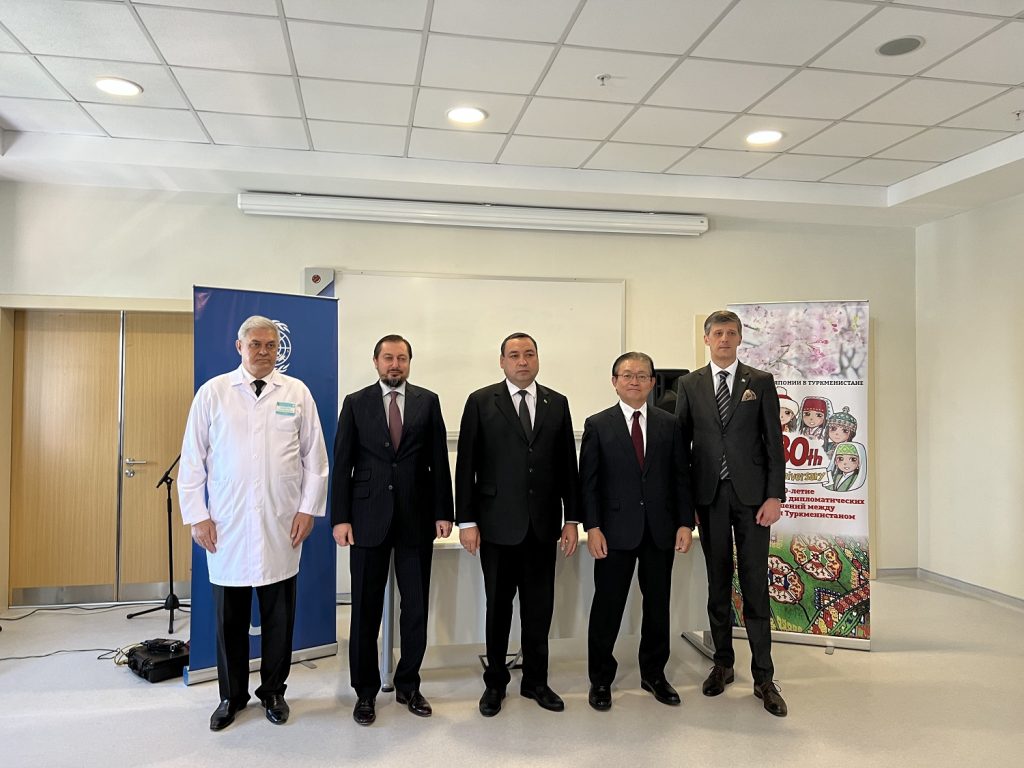 He also added that the implementation of such health projects is quite essential and timely, given the realities of our time and the challenges that our world faces, including the global pandemic of COVID-19, and added that the Government of Japan is pleased to make its contribution to the modernization of Turkmenistan’s national health system.

In addition, during the ceremony Deputy Minister of Health and Medical Industry of Turkmenistan Mr. Chary Agamyradov has also delivered a welcome speech and expressed profound gratitude on behalf of the Ministry of Health, the Government and people of Turkmenistan to the Government of Japan for providing such modern and high-tech medical equipment, which has been already installed at over 50 medical centres throughout the country and which is being successfully used by Turkmen doctors.

At the end of the ceremony, all participants were followed to the medical rooms to observe the equipment that had already been installed and Ambassador of Japan Mr. Yamamoto had a friendly talk with the medical staff of the Emergency Aid Centre. During the conversation Aid Centre personnel briefly explained him about the effectiveness of the equipment and once again expressed their gratitude to the Government and people of Japan for such a significant contribution to the development of the healthcare system of Turkmenistan. 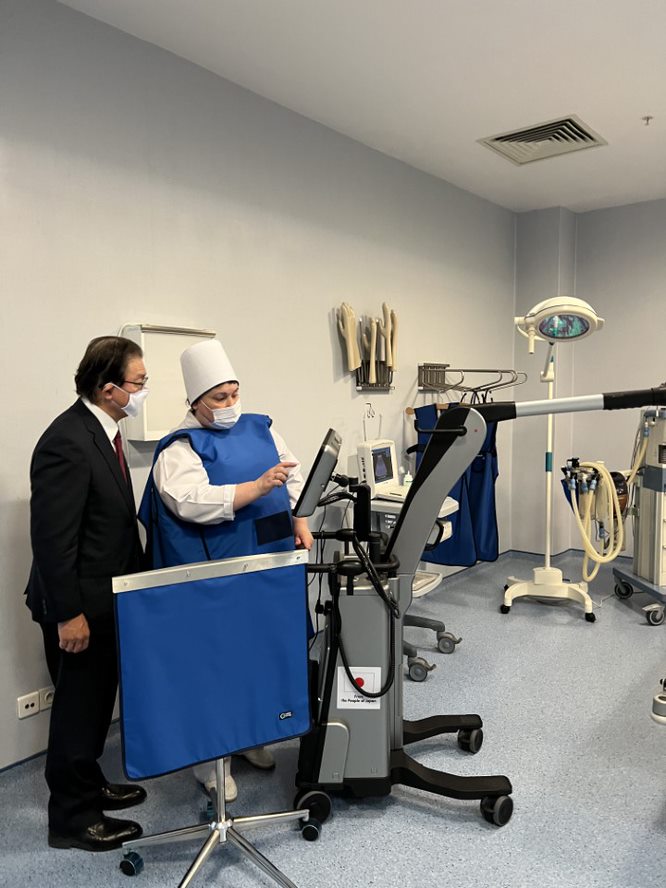 Dear guests, colleagues and partners, It is my pleasure to welcome you today at the solemn ceremony dedicated to the final stage of the Grant Project for enhancing the healthcare system of Turkmenistan through the provision of medical equipment, which was initiated by the Government of Japan and implemented by the United Nations Office for Project Services (UNOPS) in cooperation with the Ministry of Health and Medical Industry of Turkmenistan.

A large-scale work has been carried out since the Signing Ceremony of the Exchange of Notes in March last year to launch the Project. In particular, within the project modern medical equipment that meets all international quality standards has been purchased and delivered in the territory of Turkmenistan, including mobile X-ray machines, ICU ventilators, modern ultrasound machines and so on. By now most of the supplied equipment has already been installed in relevant hospitals and medical centers in all regions of the country, including Ashgabat. In addition to that, professional training has also been successfully conducted for the relevant medical personnel in order to ensure the further efficient operation of the installed equipment.

In this regard, I would like to express my sincere gratitude to all those involved in the project for their efforts and tireless support during its implementation, including the UN mission in Turkmenistan, UNOPS Office both in Austria and Turkmenistan, as well as the Government of Turkmenistan. 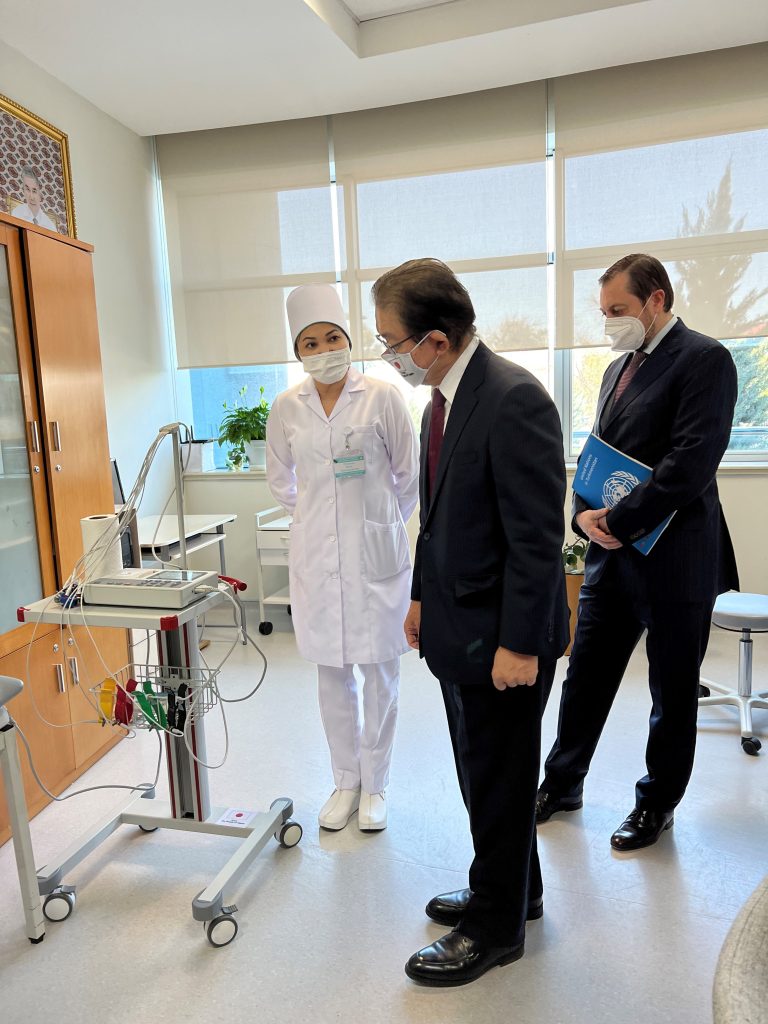 I am deeply convinced that the implementation of such projects in the healthcare field is crucial and timely, given the realities of our time and the challenges the world faces, including the global pandemic of COVID-19. In this regard, the Embassy of Japan, on behalf of the Government and people of Japan, is also pleased to contribute to the modernization of Turkmenistan’s national healthcare system in accordance with international health standards and norms.

I am also pleased to note that it is a great honor for me to witness the implementation of such an important project on the eve of the 30th anniversary of the establishment of diplomatic relations between Japan and Turkmenistan, which will be celebrated on the 22nd of April this year. In addition, I would like to highlight that this Project will be another demonstration of friendship and solidarity between the Japanese and Turkmen peoples.

In conclusion, let me once again thank all of the stakeholders for their contribution to the achievement of this project and wish everyone good health, prosperity and success in their work!