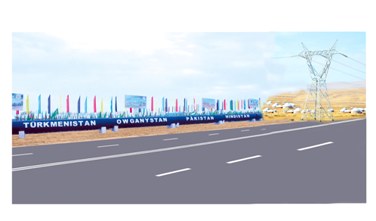 This decision was taken at a meeting between Pakistani authorities and Turkmenistan delegation that visited Pakistan last month.

On January 31, 2022, a bilateral meeting was held between representatives of the Ministry of Energy of Pakistan under the guidance of the Federal Minister of Energy Hammad Azhar and the Turkmenistan official delegation headed by the Deputy Minister of Foreign Affairs of Turkmenistan Vepa Hajiyev. During the meeting issues related to the implementation of regionally and globally significant projects of the Turkmenistan-Afghanistan Pakistan-India Gas Pipeline and Turkmenistan-Afghanistan-Pakistan Power Transmission Line were discussed.

In order to start joint work on the TAPI project as soon as possible, parties have identified the goals and objectives ahead. According to the results of the negotiations held between the parties in December 2021, it is planned to sign project agreements between the parties in the first half of 2022, as well as, to hold a groundbreaking ceremony for the Pakistani portion of the project.

Turkmen representatives noted that as a result of the 26th session of the Conference of the Parties (CoP26) to the UN Framework Convention on Climate Change, held from October 31 to November 12, 2021 in Glasgow, Scotland, as of today natural gas has a special place in the replacement of the coal industry.

According to draft official documents, notwithstanding the declining interest of the Asian Development Bank (ADB) to TAPI project, parties will continue working on its implementation. In this regard, parties will approve the composition of the team on technical, legal and financial issues of the project as soon as possible. Subsequently, the upcoming work on the implementation of the Pakistani section of the project will be determined.

Upon introduction to the concept and the current state of the project, parties made the following decisions: (i) in order to manage the risks associated with the coal industry policy, it was stressed that the TAP project is an alternative and economical source of power supply with zero emissions and high availability. Pakistani party will consider the issue of including this project to the national program for the construction and commissioning of facilities on the territory of the Pakistan planned until 2030 and will inform Turkmen party about the results at the earliest.

Pakistani party noted the establishment and commencement of work of its technical team on the project. Team will prepare its proposals and comments on the techno-economic feasibility study on the Pakistani section of the project submitted by project Investor Calik Holding A.S of Turkey, back in July 2020 and will inform Turkmen party about team’s possible video call date soon. Taking into account the importance of the decisions taken and the tasks scheduled ahead, Pakistani party, based on the request of the Turkmen party, will appoint appropriate representatives who will separately oversee both projects on the territory of Pakistan. Parties will make the necessary efforts to timely perform the tasks in due course. /// nCa, 15 February 2022 [cross post from Business Recorder, Pakistan, 14 Feb]