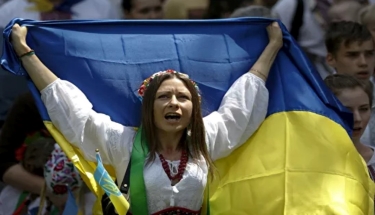 While the USA, in the traditions of Empires on their way out, wants a war, does Ukraine also want a war?

Is Ukraine eager to let the USA ignite an inferno on the Ukrainian territory? Will Ukraine be happy to serve as the battleground for a futile war between Russia and the West, a war that will inevitably end on the negotiation table?

Regardless of who else wants a war, a war on the Ukrainian territory, President Zelensky is certainly not a part of that crowd.

Here are the main points of the CNN story:

The complete CNN story can be found here: https://edition.cnn.com/2022/01/28/europe/ukraine-russia-zelensky-biden-intl/index.html

Among other things, the sensible stance of Zelensky is driven by the economic concerns. Because of the tensions, fueled by the western rhetoric, the economy of Ukraine has already been bruised and the investor confidence damaged.

The hard fact, in the world of statistics, is the GDP of a country.

Here is a graphic that tells a powerful story:

It shows that Ukraine had its highest GDP in 2013, which was USD 183.31 Billion. Till now, it has not recovered to reach that level again.

Why is the year 2013 significant? — It was the last year of President Yanukovich in power, a democratically elected president who was ousted by the violent, western backed protests. Yanukovich had built the GDP to the highest level in the history of Ukraine.

No one wants to acknowledge that the ouster of Yanukovich was not only undemocratic, but it also caused a heavy blow to the Ukrainian economy, and to the people of Ukraine. Per capita GDP of Ukraine under Yanukovich in 2013 was USD 4030 and now, under Zelensky, it is USD 3100, a reduction of 25%.

Ukrainians are poorer today compared to 2013 because of what was done to them in the name of democracy. Never mind that it was actually democracy that was being derailed.

It is not difficult to envision what will happen to the average Ukrainians if a war actually starts now.

The west can decide when to start the war but Russia will decide when to stop it. The end result will not be to anyone’s liking and everyone will be a loser. In fact, there is every possibility that the conflict will determine its own geographical spread after the first shot is fired.

While Zelensky is talking sense, is there any sensible voice in Europe? /// nCa, 31 January 2022