On 29-30 April 2021, a delegation of Turkmenistan headed by DPM, Chairman of the Supreme Control Chamber, member of the national security council Serdar Berdimuhamedov visited Kazan to participate in a meeting of the Eurasian Intergovernmental Council.

On the sidelines of the visit, Serdar Berdimuhamedov had separate meetings with Russian Prime Minister Mikhail Mishustin and President Rustam Minnikhanov of Tatarstan.

“We have made significant progress in the field of trade, despite the crisis and global processes that affect our mutual relations not the best way. According to Russian statistics, the mutual trade turnover grew by almost 40% compared to 2019 and has already approached a billion dollars. This is a record level for the last five years,” Russian Prime Minister Mikhail Mishustin said at a meeting with DPM Serdar Berdimuhamedov. 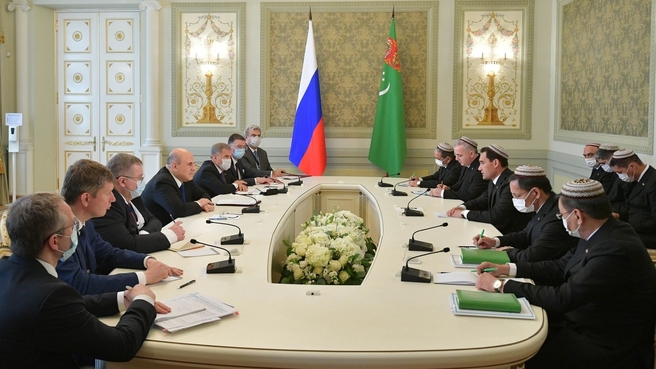 The head of the Russian government reaffirmed his country’s interest in strengthening friendship, good-neighborliness, partnership, and mutual economic development with Turkmenistan.

“We would like to give a new impetus to bilateral cooperation, create the necessary conditions for restarting promising joint projects and initiatives in various areas of the economy,” he added.

Leading Russian companies are successfully operating in Turkmenistan, and major joint projects are being implemented in such industries as mechanical engineering, transport infrastructure, oil and gas, agriculture, and telecommunications. Cooperation in the medical and sanitary-epidemiological fields remains among the priorities. Cooperation in the field of education is developing successfully.

Before the pandemic, 36 000 Turkmen students were studying in Russia.

In turn, Serdar Berdimuhamedov noted that for the first time Turkmenistan took part in the meeting of the Eurasian Intergovernmental Council as an honorary guest. He expressed hope that the meeting will open new incentives for the development of cooperation both in bilateral and multilateral formats between Turkmenistan and the Russian Federation.

The main factor in the dynamic development of bilateral relations is the open, friendly political dialogue that has developed between the Presidents of Turkmenistan and the Russian Federation, he said.

According to the Turkmen side, the volume of Turkmenistan’s trade turnover with the Russian Federation in 2020 reached US $ 1.374 billion.

Serdar Berdimuhamedov also noted that close contacts have also been maintained between Turkmenistan and major regions of the Russian Federation, such as Tatarstan, Astrakhan Region, and St. Petersburg.

Turkmenistan is a strategic partner for Tatarstan

Turkmenistan is a strategic partner for Tatarstan. The statement came from the President of Tatarstan Rustam Minnikhanov at a meeting with the DPM Serdar Berdimuhamedov. 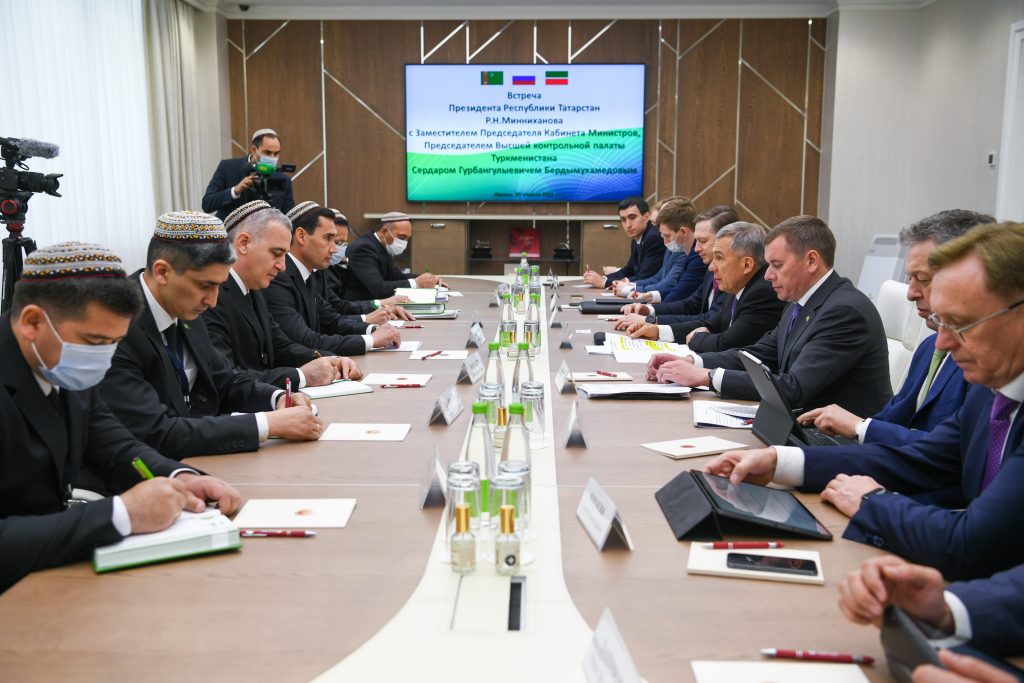 Minnikhanov stressed the need to continue efforts on increasing the volume of mutual trade. He stressed the availability of a great potential for the development of relations in such areas as oil exploration, oil production, gas transportation, mechanical engineering, energy, supply of chemical products, pharmaceuticals and medicine, agriculture.

In 2019, the trade turnover between Turkmenistan and Tatarstan equaled US $ 107 million.

As of today, 5,122 students from Turkmenistan study in Tatarstan. “Turkmenistan ranks first in terms of the number of foreign students in our republic. I am sure that their knowledge will be in demand in your country,” the President of Tatarstan said.

Rustam Minnikhanov thanked the leadership of Turkmenistan for the support of 15 000 Tatars living in the country. He added that Tatarstan also pays great attention to the national and cultural autonomy of the Turkmens totaling about 3 000 people.

The President of Tatarstan invited the Turkmen delegation to take part in the festivities of the 1100th anniversary of the conversion to Islam, to be marked next year. 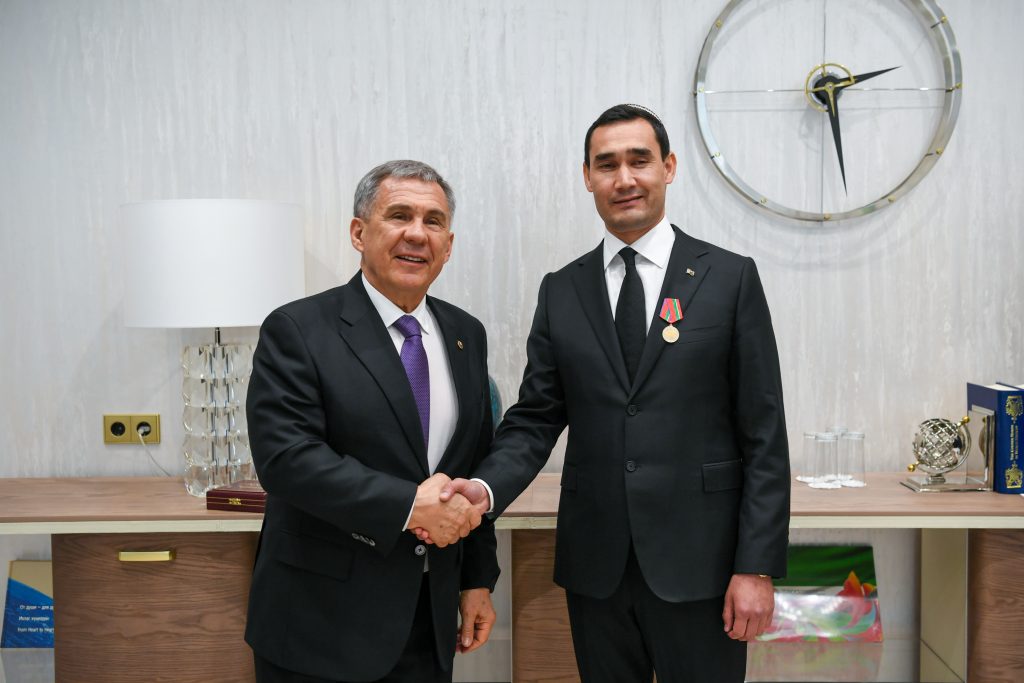 At the end of the meeting, Minnikhanov awarded Serdar Berdimuhamedov with the medal “100 Years of the Formation of the Tatar Autonomous Soviet Socialist Republic”, which is the state award of Tatarstan.

Tatneft and Turkmenneft to expand the scope of partnership

In the future, Tatneft may take part in exploration in the offshore fields of the Turkmen sector of the Caspian Sea, the TASS news agency reports, citing the press service of the President of Tatarstan.

“Promising projects for the development of cooperation between Tatneft and Turkmennebit for the near future include drilling and construction of new oil wells; construction of digital geological and hydrodynamic models of oil fields in Turkmenistan; setting up production facilities for the repair of oilfield equipment (ESP, drill bits, drill pipes, diagnostics of pumping rods, etc.); participation in exploration on offshore fields in the Turkmen sector of the Caspian Sea, etc.,” the statement says.

Tatneft has been cooperating with Turkmenistan since 2008. On 25 January 2021, the Tatneft branch in Turkmenistan launched repair site of lifting pipes.

On the sidelines of the visit to Kazan, members of the Turkmen delegation met with Deputy Prime Minister of Tatarstan, minister of agriculture and food Marat Zyabbarov. The Turkmen side was represented by the minister of trade and foreign economic relations of Turkmenistan Orazmyrat Gubrannazarov, director of the Central Material Support of the ministry of agriculture and environment of Turkmenistan, Chairman of the Union of Industrialists and Entrepreneurs.

Marat Zyabbarov stressed that Tatarstan companies have experience in cooperation with Turkmenistan. 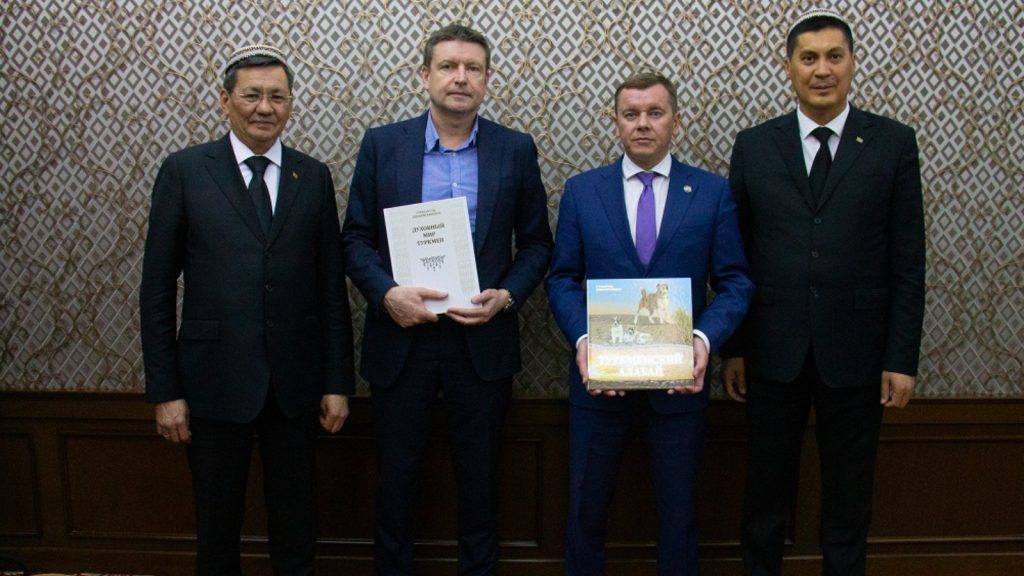 According to trade minister Gubrannazarov, Turkmenistan is interested in the import of wheat grown in Tatarstan, unrefined vegetable oil, sugar, and meat.

During the meeting, Marat Zyabbarov presented Orazmyrat Gubrannazarov with a book written in honor of the 100th anniversary of the ministry of agriculture and food of the Republic of Tatarstan. nCa, 3 May 2021 /// (based on press releases of MFA Turkmenistan, press services of the government of Russia and President of Tatarstan)