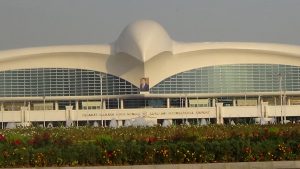 Ashgabat, 17 September 2016 (nCa) — the new international airport in Ashgabat, the largest airport complex in the region, was opened Saturday (17 September 2016) in a colourful ceremony led by President Berdymuhamedov.

The top government officials, heads of diplomatic missions and international organizations accredited in Turkmenistan, the heads a number of foreign companies who are long term partners of Turkmenistan, the participants of the media forum, notable citizens and students attended the ceremony.

“Civil aviation is now an important component of the logistics and transportation, which allows Turkmenistan to integrate successfully into the system of international transport and transit routes,” said President Berdymuhamedov at the opening ceremony.

The date of opening of the new airport is of symbolic significance – exactly one year remains till the start of the Asian Indoor and Martial Arts Games 2017.

“The new international airport in Ashgabat, being at crossroads of continental and transcontinental transport routes will take the cooperation in the Eurasian space to a new level,” said the president. 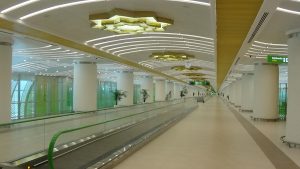 The new airport complex occupies the area of more than 1200 hectares and consists of more than 100 facilities, of which 48 are major. Among them – main passenger terminal, terminal-II, cargo terminal, complex of hangars, air traffic control, civil aviation training centers, medical center,  buildings of fire and rescue services.

Cargo handling capacity of cargo terminal with an area of over 17 thousand square meters is 200,000 tons of cargo per year.

The airport has two runways with length of 3,800 meters each. This will enable all kinds of aircraft, of any size, land and take off at this airport.

Next to the cargo terminal, the apron with 5parking zones for all types of aircraft is located.

The international airport of Ashgabat has been awarded several certificates that were handed to the head of Turkmenistan Airlines during the opening ceremony:

– Guinness World Records has certified the largest carpet ornament “Gul”, which is 705 square meters (7,588.56 sqft), decorating the roof of the main passenger terminal.

Some technical details of the main passenger terminal: