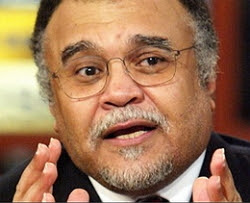 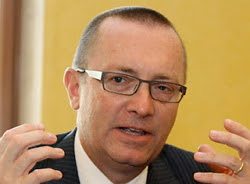 [Only the Jewish press took note of this most newsworthy report.  The  Western media didn’t even bother ridiculing it or calling the idea of an actual “blueprint for Syrian civil war” “ludicrous.”  Now that most of the facts reported in the Syrian news report have largely come true, reading it should seem less like fiction to all of you non-believers.  For the rest of us, the the report is self-validating, simply because of its prophetic accuracy.  Proving “premeditated mass-murder” in Syria will make the preliminary case for Nuremberg-like war crimes trials possibly “crimes against humanity” for both Bandar bin Sultan and Asst. Sec. State Jeffrey Feltman, or anyone who helped them commit the criminal acts.]

(a) Crimes against peace:

(i) Planning, preparation, initiation or waging of a war of aggression or a war in violation of international treaties, agreements or assurances;

(ii) Participation in a common plan or conspiracy for the accomplishment of any of the acts mentioned under (i).

Why did website linked to Syria regime publish U.S.-Saudi plan to oust Assad?

A regime-linked Syrian website reports on a U.S.-Saudi plan to foment unrest and oust Bashar Assad through killings, mass demonstrations and arson, not unlike what is happening now.

By Zvi Bar’el
The heavy blackout imposed by Syria on coverage of the deadly demonstrations there, including the number of casualties and the extent of the serious damage caused to Ba’ath Party offices in a number of cities, is not hindering another kind of reporting.
The media there are seeking out details of involvement of “foreign elements” they say are trying to foment a revolution in Syria. These reports impart information about kinds of vehicles these “elements” have used, the weapons in their possession and the means by which they have recruited demonstrators.
The Syrian media have never been as open as they are now in describing the subversives. The sunshine reached new levels with a recent expose by the Champress Internet site, which has close ties to the regime, on a secret Saudi-American plan to topple the government of President Bashar Assad, presented in full.
According to the report, the plan, which was first broadcast on the Iranian Arabic-language television station Al-Alam, was formulated in 2008 by the Saudi national security advisor, Prince Bandar bin Sultan and Jeffrey Feltman, a veteran U.S. diplomat in the Middle East who was formerly ambassador to Lebanon and is currently the assistant secretary of state for Near Eastern Affairs.

The following Eng. translation of Bandar’s Syrian confession, exactly how it was published in Champress, was saved for us by Stratfor Global Intelligence firm (Mossad)

http://www.champress.net/index.php?q=en/Article/view/86507
March 30, 2011
Several media sources have revealed the details of a “well-organized” plan
to destroy Syria and create chaos in the country. The plan is said to be
drawn up by Bandar bin Sultan, the former Saudi ambassador to the United
States, in collaboration with the former U.S. Ambassador in Lebanon,
“Jeffrey Feltman” to overthrow the regime in Syria and to bring Syria back
to the “stone age”, according to the sources.
The lengthy and detailed plan, developed by Bandar bin Sultan and his
friend Feltman in 2008 with a funding reached $ 2 billion, consists of
many items and precise details which significantly intersect with the
incidents of disturbances the city of Daraa has recently witnessed.
According to sources, the plan “strategically” depended on the
exploitation of peoples’ legitimate desire in freedom, dignity and getting
rid of corruption and on the turning of these wishes into a revolt against
the regime through convincing the people that the road to reform from
within the regime is closed and the solution is an all-out revolution.

However, the plan tactically divided Syria into three areas (big cities,
small cities and villages), and the established five types of networks: 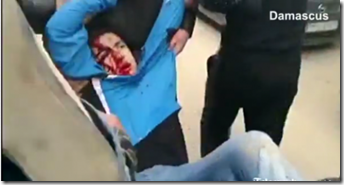 Dec. 31, 2011
snipers and with bullets of the same type used by police or security forces. This
stage also includes the killing of security personnel or guarding police. 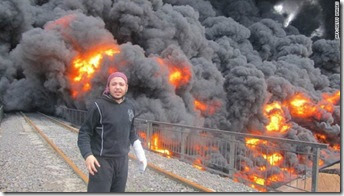 Burning properties of the traders
who have been involved in the plan and
dragging them into a state of fear together with other economic figures
with the purpose of having influence on the lives of as many people as
possible.
– Provoking Bashar al-Assad loyalists and engaging them in polemics with
others, especially the Islamists,. Here the loyalist are to be accused of
being from the intelligence and that they are horns of the regime and
beneficiaries from the authority.
Creating mistrust and tension between the loyalists and the people,
telling about the near end of Bashar al-Assad and calling for random
supportive demonstrations and calls advocating slaughter, murder and
terrorism are planned to be launched. In turn, opponents keep calm and
delay any move till after the creation of sectarian and ethnic killing.
They have to be well-organized in their calls for political reform,
freedom, democracy and civil life.
– Foiling any attempt to attain political solutions by the regime through
burning symbols of power such as the Baath Party headquarters, police
stations, prisons and security forces centers in addition to distorting
Bashar al-Assad pictures.
3- The fourth network (The media) is introduced. The aim here is to link
Bashar al-Assad to all previous era and to devalue all his actions by
opening all the old files and holding the current regime responsible for
them.
Bandar bin Sultan recognizes in his plan that Bashar Assad enjoys a real
popularity inside and outside Syria that should not be underestimated. He
believes that this popularity must be exploited and transformed from a
point of strength into a point of weakness through the use of the
enthusiasm of supporters against demonstrations.
To undermine the military, the government and the security system, Bandar
believes that they must be torn into sects, and here comes the role of the
third network the ( “ethnic-sectarian” network) taking into account the
neutralization of major doctrines like the Shafi’I and the Hanafi. This
will be done as follows:
– Urging each sect to commit horrible bloody massacres against violators.
These crimes must be filmed and posted to the media as soon as possible.
The start should be in places far from Damascus and there should not be a
lot of blood for fear that people may retreat.

[SEE:  Lattakia, Alawite farmer tortured,eye plucked out by moderate FSA beheaders 18+ brutal ]
For instance,
in Latakia
and Tartous, people from the Alawite sect from the network slaughter youths from the Sunni sect, cut parts of their
bodies chant long live Bashar. 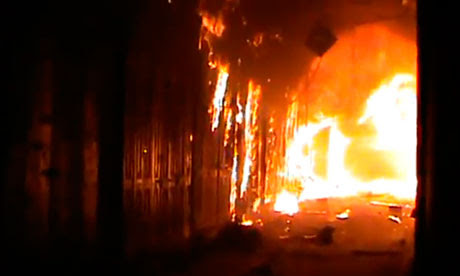 In Aleppo
Salafis from the network attack Alawites’ villages, burn their
homes and terrorizing the people to leave their villages and chant “Death
to the “Nasirien” death to the enemies of the Sahaba”. 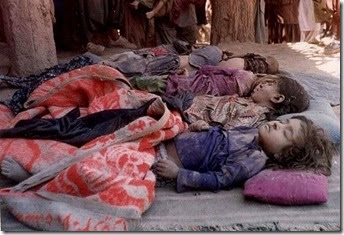 In Hasakah,
Arabs from the network 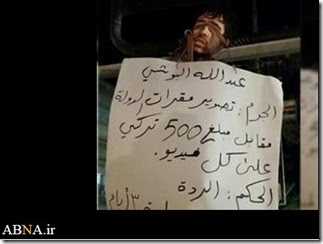 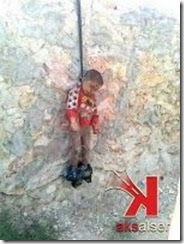 hang some young people
and make fun of the Kurds in a visual way without language and clear
enough to be understood by the Kurds without translation. 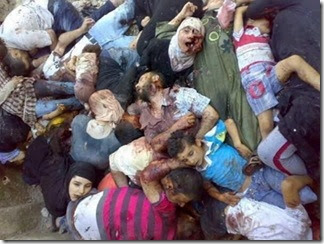 Some Christians,
particularly Armenians are planned to be killed. 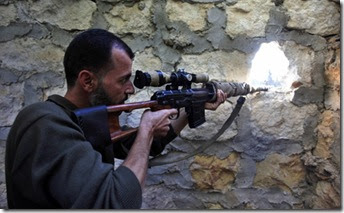 In Daraa,
“snipers” from outside the city of Daraa kill young people from
the Jawabra and the Mahamid families without approaching anyone from the
Abazeed and the Masalmeh families. 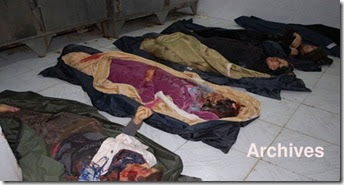 In the city of Al-Boukamal,
the Shi’ites kill Sunnis and scream, “Oh Karbala, Oh Hussein”.
In Homs, Arabs kill Turkmen and loot their shops, particularly gold shops
and also kill Catholic Christians and Murshdis.
In Sewidaa, Druze members of the network kill a number of Christians in
surrounding villages and burning several churches
In Qamishli, Kurd members of the network avenge the killing of Kurds in
Hasaka. Some Armenians also kill Arab Muslims.
In Deir Ez-Zour, “snipers” from outside the city kill young people from
the Agidat and Bani Naeem tribes without approaching smaller tribes like
the “Rolla”, the “Jabour” or the “Shummar” and scream during the filming
in the name of the “Bokhabour and the “Mohassan”.
Bandar thinks that the regime as a whole will be busy trying to settle the
disputes between communities and ethnic groups. Bashar al-Assad will send
delegates from his government to resolve sectarian and ethnic differences
while Damascus will be empty of government pillars and here comes the turn
of Damascus where each minority group avenge and the city flares up from
all sides. This will be done as follows:
– The Christians in the east of Damascus kill Muslims who live among them
in areas like Qassaa and Bab Touma. They also kill the Druze in the
village of Jaramana.
– The Sunnis in the south of the city kill Shiites living among them in
the “Shaghour” and the “Muhajereen” areas.
– Salafis in the areas of “Duma” and “Darayya” burn the headquarters of
the municipality, courts and police stations.
– Alawites in the west of the city in “Mezze Jabal” area kill Sunnis who
live among them.
– Kurds in the north of the city in “Rukn Eddin” area attack Arabs from
all sects.
Meanwhile, Bandar believes that the army will be divided, the security
systems and the government will collapse and Bashar will only have the
Republican Guard, which he will not be able to move because the army will
stand against him. This will make Bashar al-Assad’s presence in power the
cause of all problems, and here comes the role of the fifth network the
(network of the capital). The following has to be implemented:
– Holding a meeting between capital owners (businessmen) and leaders of
the army and security bodies as well as ministers from Damascus and
Aleppo. The plan is to convince them to abandon Bashar al-Assad promising
them survival after the end of the President’s rule.
– In case some businessmen refuse to cooperate, they are threatened of
canceling authorizations, of withdrawing investments and of sex scandals
if they are among those penetrated by sexual relations.
– In case some army leaders refuse, they are threatened of imprisonment or
assassination. If it is possible under a state of chaos, officers of high
ranks, not from Damascus or Aleppo, could be assassinated to terrorize
them.
-A national council of businessmen, ministers and security chiefs must be
formed and recognized by the United States, France, Britain, Saudi Arabia
and Egypt.
peter.chamberlin.hotmail.com