You are here: Home / Articles And Reports / Ashgabat hosted Dialogue of Women of Central Asian countries and Russia 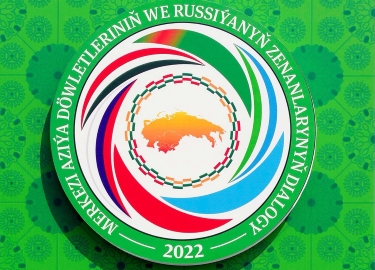 On 13 May 2022, a dialogue of women from Central Asian countries and Russia entitled “The role of women in socio-political and socio-economic development” took place in Ashgabat.

The Women’s Dialogue was initially created in the format of five Central Asian countries in 2020 with the support of the UN. In 2021, the Dialogue met in Avaza on the sidelines of the Consultative Summit of the Heads of Central Asian states. 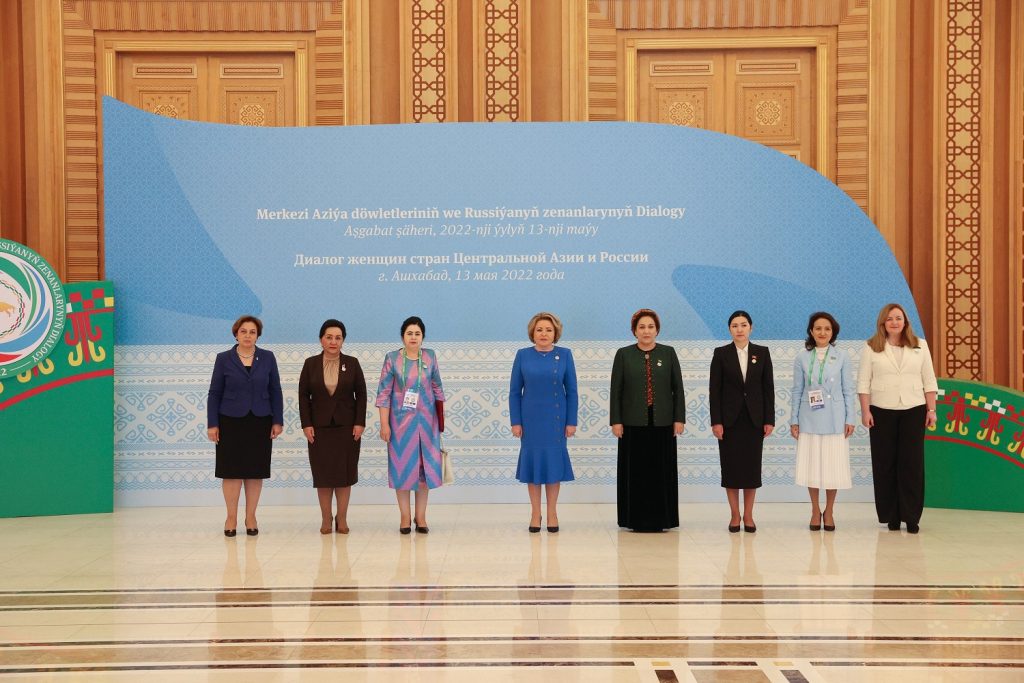 This year Turkmenistan is chairing the Dialogue. The Chairman of the Halk Maslahaty Gurbanguly Berdimuhamedov initiated the expanded format of the forum.

Opening the plenary session, Chairperson of the Mejlis of the Milli Gengesh of Turkmenistan Gulshat Mammadeva said that the Dialogue is turning into an effective platform for the exchange of views and experience, the best world practices in empowering women and girls, raising their participation in the political, socio-economic, cultural and humanitarian life of society.

Promoting cooperation in priority areas, including issues of gender equality and sustainable development, our countries make a significant contribution to strengthening peace, friendship and trust around the world, the Chairman of the Mejlis stressed.

The dialogue is aimed at supporting cooperation, trust and mutual understanding between women in the region, providing them with greater opportunities to have a more subnational impact on decision-making processes related to peace, stability and sustainable development in the region.

“Both in Russia and in the countries of Central Asia, respect for women is at the heart of national values and social principles. A woman in our countries has always been the embodiment of kindness and mercy, the bearer of traditions, the keeper of the hearth,” the head of the Russian parliament’s upper house said.

According to Matvienko, at a time when world politics and the global economy are becoming more brutal, uncompromising, there is a growing demand for female leadership, a female perspective in a variety of areas.

She stressed that the leaders of the Central Asian states and Russia pay special attention to the promotion of the women’s agenda. “Women have every opportunity to become a powerful driving force in politics, economy, science, ecology and culture.”

In the modern world, women have a great influence on strengthening international, interregional relations, parliamentary diplomacy. “The Dialogue of Women of Central Asian States and Russia platform in close contact with the UN will promote more active interaction between women leaders of our countries, search for new directions for mutually beneficial ties,” she added.

The peoples of Central Asia and Russia, united by a common history and good-neighborly relations, strive to further strengthen trust between countries. “We are once again convinced that without the participation of women, the formation and implementation of the global and regional social political agenda is impossible,” the head of the upper house of the Russian parliament stressed.

Natalia Gherman, Special Representative of the UN Secretary-General, Head of the UN Regional Center for Preventive Diplomacy for Central Asia, noted the uniqueness of the dialogue platform as the first in the history of the region demonstrating the political will of the leaders of states and all participants of the forum to work on the full range of issues related to the role of women in society, starting with economic potential and ending with participation in peace-building processes.

Particular emphasis was placed on the importance of holding a Dialogue in close coordination with high-level events. This fact confirms that the leaders of the Central Asian countries attach particular importance to the implementation of policies aimed at achieving gender equality, ensuring the full participation of women in the political, social and economic life of society, Gherman emphasized.

Representatives of the Dialogue will take part in the Women’s Water Forum within the framework of the Second High-level Conference on the International Decade of Action “Water for Sustainable Development” in Dushanbe, in the SCO Women’s Forum in Tashkent and in a meeting of the UN Peacebuilding Commission.

The head of the UNRCCA expressed confidence that through joint efforts the huge potential of the Women’s Dialogue will be realized, new frontiers will be reached to promote the participation and representation of women, increase their role in countering global threats, including climate change and environmental degradation.

UNDP Resident Representative in Turkmenistan Narine Sahakyan welcomed the forum on behalf of Mirjana Spoljaric Egger, Director of the Regional Bureau for Europe and the Commonwealth of Independent States.

“We attach great importance to the social economic and political role of Central Asian women, who can influence and manage transformational changes in societies to achieve key goals, including Sustainable Development Goals, and participate in supporting regional peace and security,” Narine Sahakyan stressed.

Touching upon gender issues, she underlined the need for broad involvement of women in the development of digital technologies that open access to online learning, work and communication. In this regard, Sahakyan mentioned the recently adopted UNDP Global Strategy for Gender Equality, which identifies six priority areas on the empowerment of women in various fields.

Sahakyan confirmed the readiness of UNDP to continue supporting the Central Asian states in the implementation of national priorities and reforms. “Women with a strong political role and economic independence can innovate, lead, adapt and create. We will continue to attract the knowledge and experience of women in the region, including those present in this hall, in order to continue to change the world for the better,” the UNDP Representative stressed.

After the ceremonial part, a plenary session discussed the issues of promoting gender equality in the countries of the region and long-term cooperation plans were considered.

The key speakers of the plenary session included:

The speakers shared the experience of their countries in ensuring gender equality through the creation and improving legislative and institutional frameworks, the development of international cooperation. 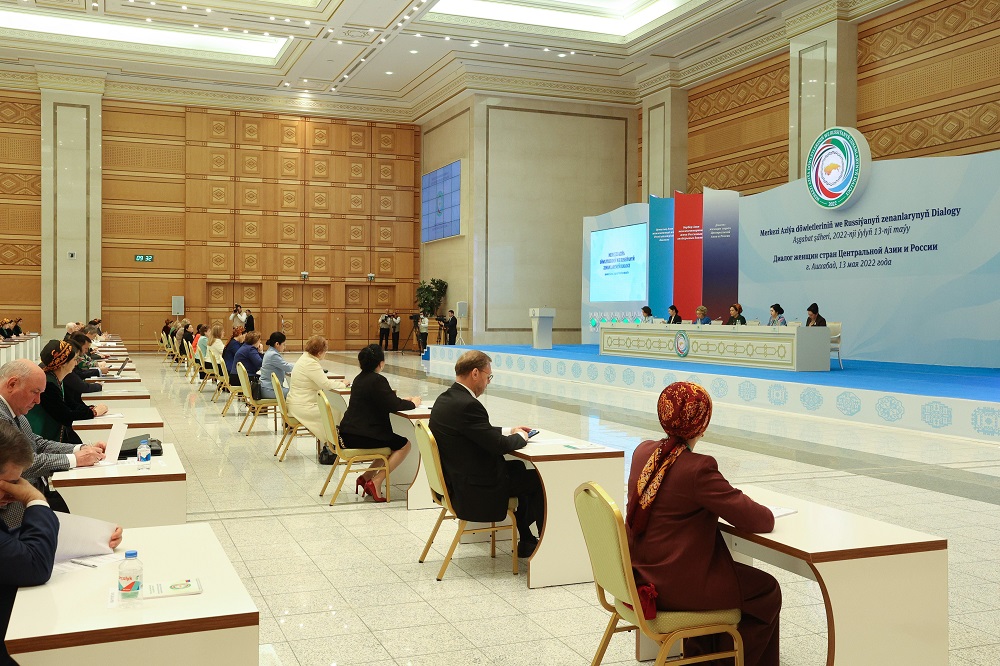 The agenda of the meeting highlighted issued such as expanding women’s involvement in state and public life to achieve the SDGs, ensuring gender equality, protecting women’s rights and interests, and enhancing their role in decision-making in the political, economic and social spheres.

Some positive ideas and initiatives for further development of regional cooperation were presented.

Thus, the Turkmen side proposed to create a regional Society of Needlewomen within the framework of the Dialogue of Central Asian Women.

In this regard, the importance of Uzbekistan’s initiative to hold the International Embroidery Festival (kashta) in Bukhara in May 2022 was mentioned.

Deputy Chairman of the Federation Council of the Federal Assembly of the Russian Federation Galina Karelova expressed the idea of a special communication platform under the Eurasian Women’s Forum for the fullest realization of the creative potential of women in Central Asia.

According to the delegates of the forum, the laid foundation will contribute to strengthening wide spectrum relations between women of Central Asia and Russia in the areas of public administration, preventive diplomacy, environmental protection, entrepreneurship and business, culture, education, science, art, health and sports, youth support, tourism development, information technology and digitalization, ensuring gender equality in general.

The Forum adopted the Declaration of the Dialogue of Women of the Central Asian States and Russia.

The document outlines the steps that should be taken at the national and regional levels to ensure gender balance and increase women’s participation in the political and socio-economic life, development of entrepreneurship.

The Forum participants signed the Regulations and the Work Plan of the Dialogue of Women of Central Asian States for 2022, which includes various events, to be held in Turkmenistan and other countries participating in the Dialogue.

Exhibition and show of the equestrian group

Participants of the Dialogue of Women of the Central Asian states and Russia visited the exhibition, where the national traditions and customs of the Turkmen people, carpet products, jewelry, national clothes, textiles, paintings by Turkmen artists were demonstrated. 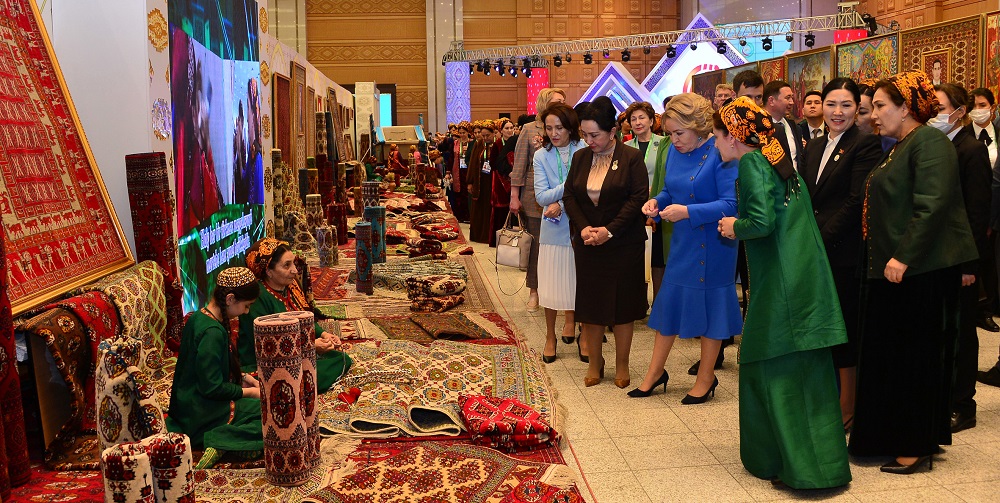 There was also a fashion show held by the Ashgabat House of Models and private Fashion houses. 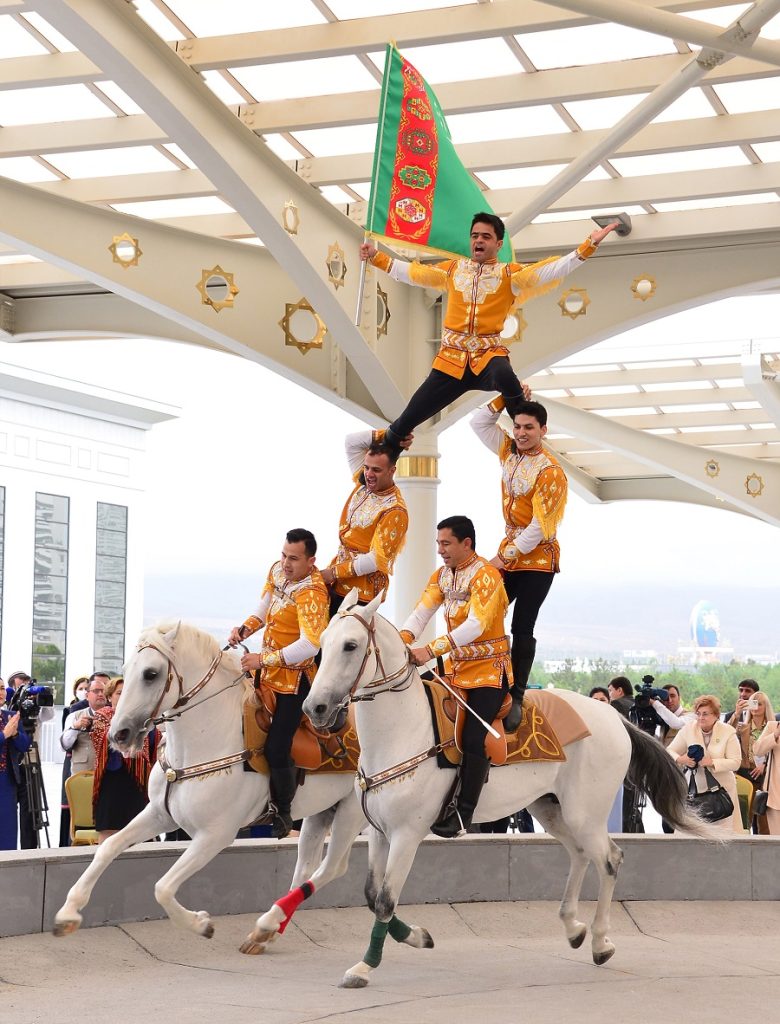 The performance of the famous Turkmen group of national equestrian games “Galkynyş” became another highlight in the cultural program.

Declaration of the Dialogue of Women of the Central Asian States and Russia is available here: https://www.mfa.gov.tm/ru/news/3160