You are here: Home / Articles And Reports / Turkmenistan assumes chairmanship of ECO 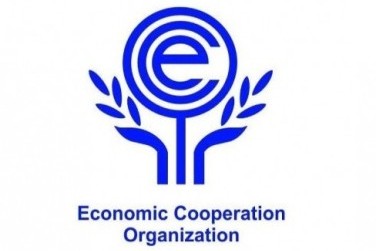 The 14th summit of the heads of state of ECO (Economic Cooperation Organization) was held on 4 March 2021 in online format. During the summit, chaired by President Recep Tayyip Erdogan of Turkey, the chairmanship of ECO was transferred to Turkmenistan.

The focus was on the promotion of trade, economic, and energy cooperation through the shared connectivity initiatives during the restrictive conditions created by the pandemic.

Turkmenistan has been a member of ECO since 1992. This regional association was created in 1985 by Pakistan, Iran and Turkey with the aim of closer partnership in the spheres of economy and trade. Since 1992, the ECO has received a qualitatively new impetus in connection with the entry into it of 7 countries – Turkmenistan, Azerbaijan, Afghanistan, Kazakhstan, Kyrgyzstan, Tajikistan, and Uzbekistan. The date of the expansion of the Organization to its current composition – November 28 – is celebrated as ECO Day.

First of all, I would like to thank the President of the Republic of Turkey – esteemed Recep Tayyip Erdogan for organizing this Summit, and also emphasize and express gratitude for the successful and fruitful chairmanship of Turkey in the Economic Cooperation Organization.

Turkmenistan regards the current meeting as an important stage in the activities of our Organization in the context of assessing and analyzing the path traveled and determining the prospects for the future. I believe that, in general, we can characterize the work of the Economic Cooperation Organization (ECO) as intensive, positively affecting regional cooperation.

Today the ECO is a large and authoritative international structure recognized in the world, over the years of which various agreements have been concluded between its members and decisions have been made on priority issues of interstate partnership.

A lot of work has been done to prepare a viable strategy focused on using the colossal joint potential for mutually beneficial and socio-economic development.

The implementation of a number of joint projects has begun, among which I would like to highlight projects in the transport and communications sector, which today plays a key role in the economic life of the region. The member states of the Organization also continue to take measures for the effective development of trade, economic and investment relations in the region.

Consistent and strict adherence to the principles and goals laid down about thirty years ago in the basis of our Organization is the most important condition for its activities. Since then, new members have been admitted to the Organization for Economic Cooperation and its current composition has been formed. Considering the ECO as a mechanism of economic interaction, I mean that it has maintained a course free from any political conjuncture, and expanded contacts with the outside world.

Also at present, building up cooperation with other international organizations and numerous countries, ECO is energetically moving beyond the region.

We, as member countries, can attribute all these results to the jointly accumulated positive experience. However, time does not stand still. It requires the development of new approaches to the work of the Organization, taking into account modern factors, trends in the world economy and vectors of activity in the region. In this context, large tasks are assigned to the ECO, corresponding to its specificity and unique geo-economic role. 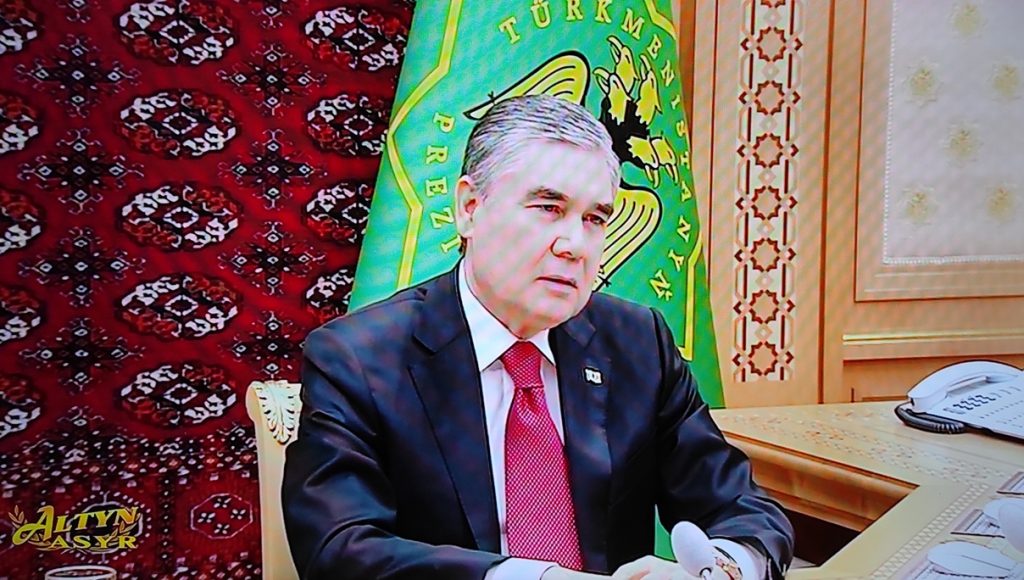 Here I would like to emphasize the consolidating essence of the ECO as a form of economic interaction between states united geographically, historically, by traditional customs and values.

Based on our natural advantages and common interests, I believe it is correct to call it a real structure for the implementation of joint projects.

Proceeding from this, we believe that the main task of the ECO today is to ensure sustainable development in the region through economic resources, to create opportunities for large-scale constructive cooperation in the name of peace and prosperity. The ECO has the necessary capabilities not only to adequately participate in global and regional economic processes, but also to actively influence their development.

Turkmenistan sees its upcoming chairmanship in the ECO in this light. I express my deep gratitude to the Member States for the confidence placed in our country. We regard the chairmanship as a responsible and high mission and will make every effort to make it successful, fruitful and serve the interests of the participants.

Now I will acquaint you with the priority areas during the presidency of Turkmenistan in the Organization.

As a strategic task, we consider the promotion of the expansion of comprehensive partnership opportunities within the ECO in the economic, trade, industrial, energy, transport, communication and cultural and humanitarian spheres.

We plan to conduct concrete work with partners to create conditions for further intensification of trade and economic relations between our countries, and are aimed at increasing the volume and diversification of trade.

To this end, Turkmenistan proposes to start work on the creation of economic routes in the ECO region, which we regard as the main stable system that ensures the movement of goods and services, the development of investments. We see industrial cooperation, the consolidation of production and technological potential, and the implementation of large joint infrastructure projects as key aspects of the economy.

It is clear that a key role in achieving the goals of economic development of the Member States, and their full participation in modern processes will be played by the transport and communications.

We consider the ECO space as a system of optimal, cost-effective and high-tech transport and communication nodes and routes on the Eurasian continent.

We propose to consider the implementation of similar ambitious and multilateral projects in various fields with the participation of other ECO countries.

The creation of transport corridors and logistics centers has acquired particular relevance. Based on this, I am sure of the need for a cardinal intensification of the design work of the ECO and the promotion of the most promising models and directions in this area.

Along with this, we call for a focus on combined transit transport corridors along the East-West route, from the Asia-Pacific region to the European part of the continent, towards the Middle East.

We also propose to expand cooperation in the Caspian Sea region, since four of the five Caspian countries are ECO members. With this in mind, we must actively move through the Caspian in the western and northern directions, and reach the ports of the Black and Baltic Seas.

We also consider the creation of energy clusters in the ECO space, and the diversification of energy supplies with the participation of our states as a key task. Currently, Turkmenistan, together with partners, is building the Turkmenistan-Afghanistan-Pakistan-India gas pipeline, which is an example of optimal and mutually beneficial cooperation.

However, I am convinced of the need for additional energy routes for us, both within the ECO region and beyond.

In this context, I believe we can establish targeted contacts between our Organization and other interstate formations on the continent, such as the Shanghai Cooperation Organization, the Eurasian Economic Union, the Commonwealth of Independent States, whose strategic interests could, on a mutually beneficial and equal basis, coincide with the interests of the ECO.

I would like to emphasize separately that Turkmenistan attaches great importance to the process of rebuilding the Afghan economy as a key factor in establishing lasting peace and harmony on Afghan soil. We are providing assistance and will continue to help this fraternal country in rebuilding the economy, building energy supply systems, transport and communications, and social facilities. In the close involvement of Afghanistan in regional and continental economic cooperation, as a participant in significant joint projects in the industrial, energy, transport, communication and logistics areas, we see a strategic opportunity for it with great prospects.

As the chairman of the ECO, Turkmenistan aims to actively promote the expansion of relations in the field of culture, sports, education, youth policy, tourism, and intends to follow the commonality of moral values ​​that unite our peoples and states by bonds of friendship and brotherhood. In this regard, we propose to pay special attention to cooperation in the field of science and medicine, and exchange of experience and knowledge in the fight against the coronavirus pandemic.

Turkmenistan regards the ECO activities as one of the factors of effective progress in the region, sees in it a great promising potential for the implementation of national programs for the economic development of the Organization’s members.

At the same time, we consider it our common task to effectively use the potential of the ECO for the well-being and prosperity of states and peoples, peace and progress in the region. As ECO Chairman, Turkmenistan will make every effort to achieve these goals.

At the end of my speech, I propose to hold the next Summit of Heads of ECO Member States in Ashgabat on November 28, 2021 – on the Day of the Economic Cooperation Organization, as well as to all of you, dear colleagues, to visit the capital of Turkmenistan to participate in this Summit.

There is some passing similarity with Phoenix, the mythical bird of the ancient Greek folklore, which arises from the ashes of its predecessor.

In 1985, it was revived by the same founding countries – Iran, Pakistan, and Turkey – and it was named ECO (Economic Cooperation Organization).

ECO aims to build cooperation among the member states for development, and promotion of trade and investment opportunities with the ultimate goal of creating a single market for goods and services in the contiguous ECO zone, and connecting firmly with the neighbouring countries and regions. As such, it has some features of EU and ASEAN.

The ECO’s secretariat and cultural department are located in Iran, its economic bureau is in Turkey and its scientific bureau is situated in Pakistan. The official language of ECO is English.

The total area of ECO member states is nearly 8 million square kilometers. The population of ECO zone is more than 528 million. The combined GDP of ECO states is about USD 6.5 trillion. Per capita GDP is USD 13000.

The structure of ECO includes the Council of Ministers, Council of Permanent Representatives, Regional Planning Council, and the General Secretariat.

Activities of ECO are conducted through directorates under the supervision of Secretary-General and his Deputies which considered and evolve projects and programs of mutual benefit in the fields of:

Here is an interesting diagram that shows that the entire membership of 8 regional organizations is also member of OIC: 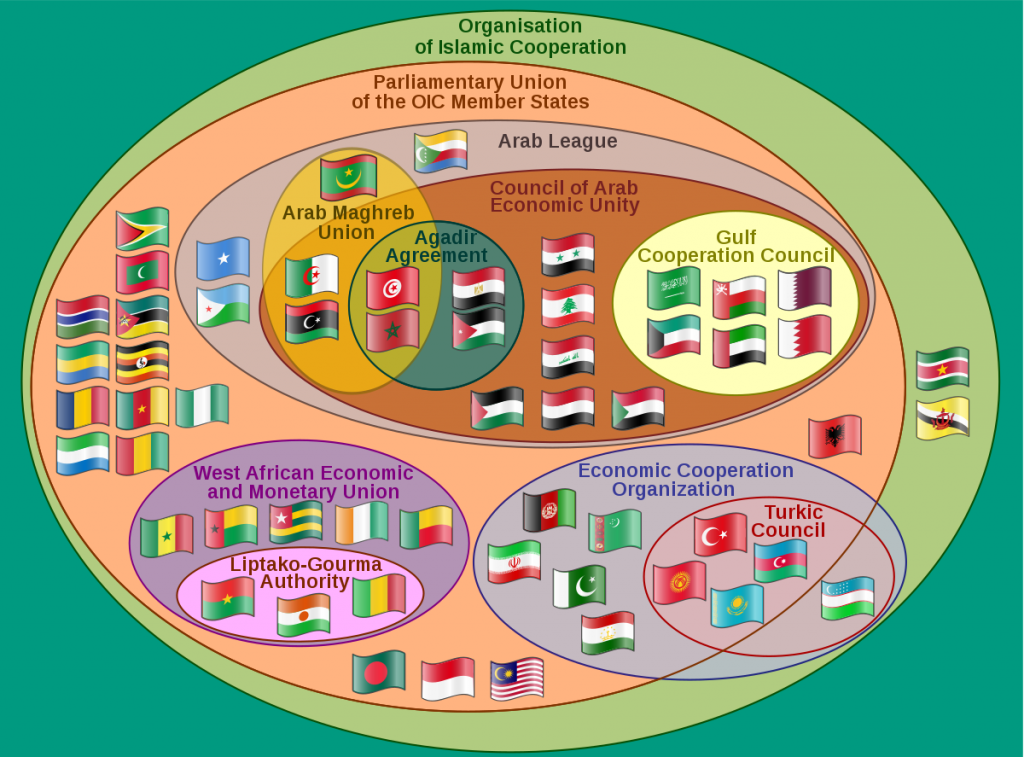 ECO was an idea that was ahead of its time. The time has arrived now.

There was the political will and the clarity of purpose but what was lacking was the connectivity infrastructure, both hard and soft. The hard infrastructure includes railway lines, roads, airports, seaports etc. The soft infrastructure is harmonization of tariffs and simplified customs and transit procedures to help speed up the movement of cargo.

After several decades of internal development in each of the ECO state, the railway connections are now available in all directions, both within the ECO space and with the adjoining countries and regions. The roads are in much better shape and more improvement is underway. The procedures are being streamlined for the speedy movement of legitimate cargo while intercepting the prohibited goods.

The BRI (Belt and Road Initiative) of China, because it covers the same space and routes in the ECO zone, is serving as booster for the objectives of ECO. The universal connectivity concept of China is perfectly in line with the national interests of each of the ECO member state. It is encouraging the consolidation of transportation and transit at massive scale, thereby enabling each country to make full profit from its infrastructure investments.

In the parlance of structural engineering, the tensile strength was not adequate back then to bear the weight of the objectives of ECO but now it can fully match the joint initiatives.

It would be appropriate to consider the idea of creating a bureau of connectivity in ECO and base it in Ashgabat. It is an idea worth exploring during the chairmanship of Turkmenistan and discuss at the summit in November 2021. /// nCa, 5 March 2021