You are here: Home / Articles And Reports / Altyn Asyr – The Lake of Opportunities

The bus was speeding in the desert. It was also trying to move in every which direction – up and down, sideways, staccato attempts at rolling and pitching, trying to defy gravity.

After a night journey from Ashgabat by train, we started in the predawn hours of 8 May 2019 from near the Serdar railway station in the Balkan province of Turkmenistan toward Garashor depression in the Karakum desert. We were going to the Altyn Asyr Lake.

We were going to witness the launch of the construction work on the first settlement along the body of water that would be the fifth largest manmade lake in the world, just ahead of Lake Nasser of Egypt.

We were going to witness how the partnership between man and nature can create a win-win situation, full of possibilities.

It was a journey of about three hours but we were in no hurry. The scenery outside the window had a timeless serenity.

The sun started rising and the visibility started began to push the horizon.

The darkness was reluctant to let go of its hold on the gorgeous expanses of soft sands. The sun was gently persistent. 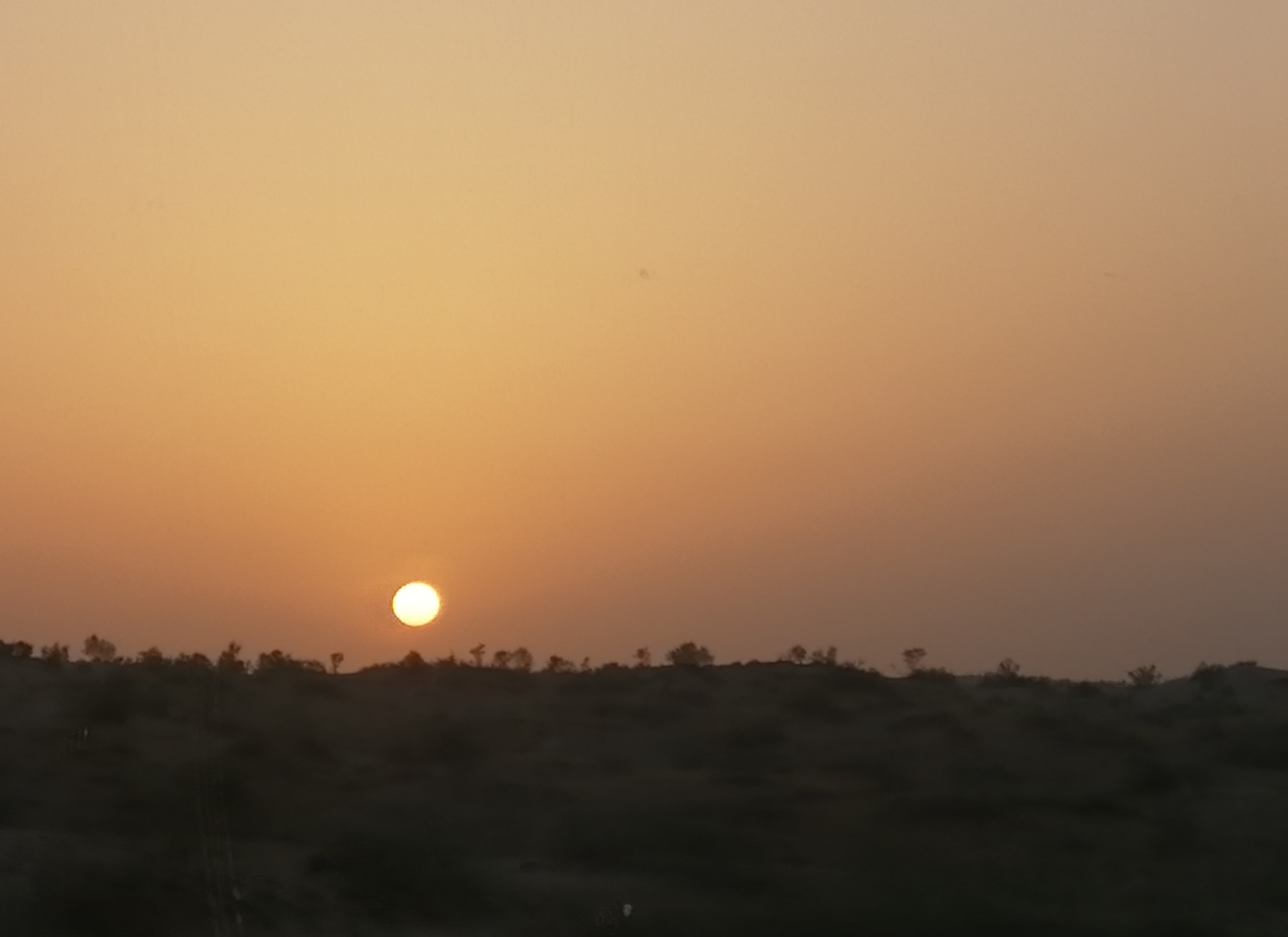 In a little while the sun managed to erase the residues of night from the land and the Karakum opened its beautiful face. It was breathtaking. 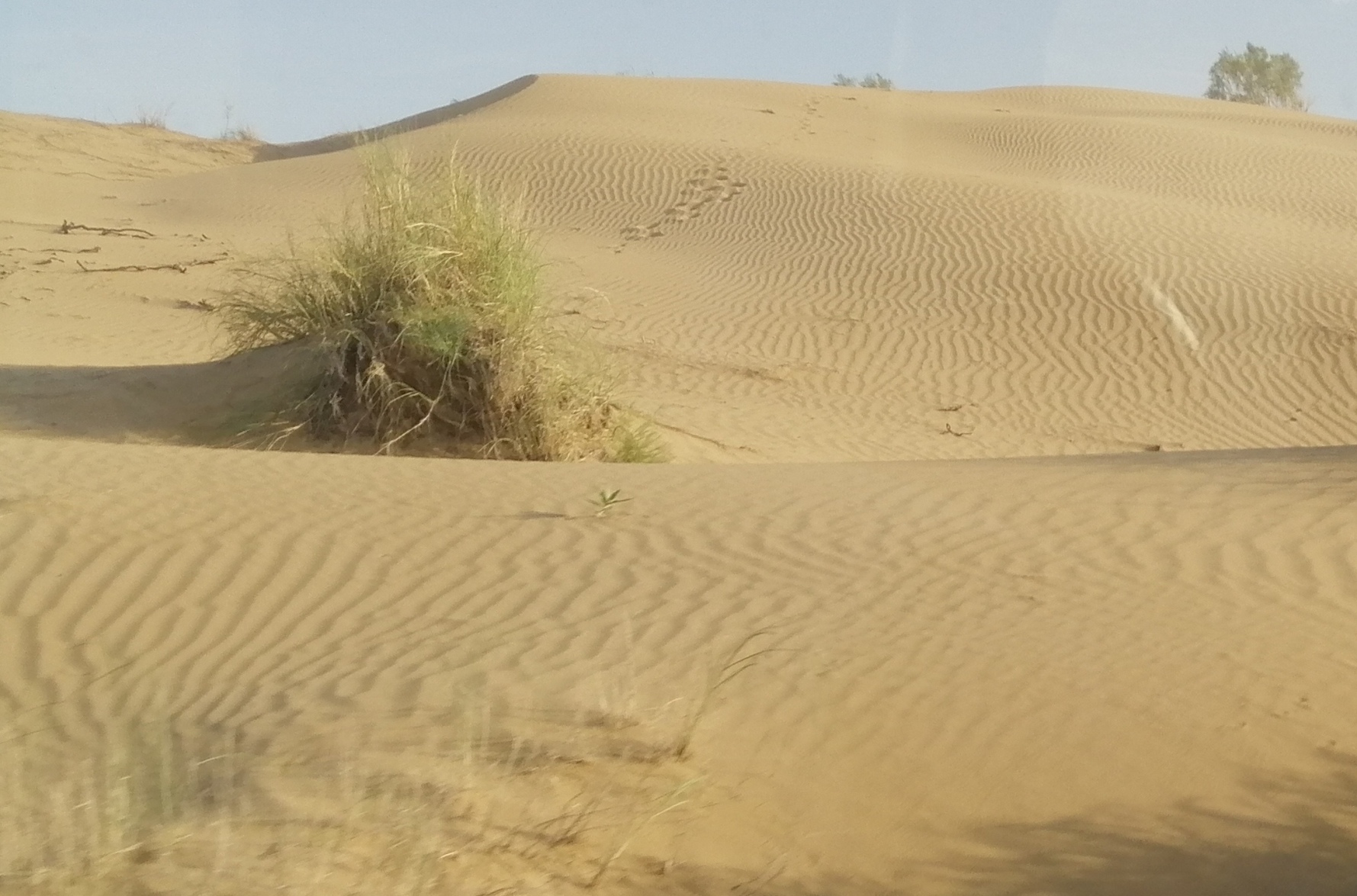 It looked like a calm sea of sand. There were undulating wrinkles every now and then, giving it a look of the tiny ripples made by tender wind.

The shrubs, the small bushes, the unimposing trees, they were all in concord. Perhaps this is how the nature defines harmony.

It was a little bit of disappointment when we saw the first tracks of a vehicle.

Suddenly, we were there.

The disappointment was very tiny, fleeting.

The first look at the Altyn Asyr Lake was reward in itself.

Water is life. Before us, there was plenty of water to sustain different kinds of life. More precisely, we were looking at a water body 23km in length.

The lake is still in the making and it will be located almost entirely in the Serdar district of the Balkan province of Turkmenistan. The shores of the lake would be touching the borders of the Dashoguz and Ahal provinces.

The total expected size of the lake is 103km in length, 18.6km in width and 72 m in depth, with total capacity of 132 cubic kilometers.

The total length of the collector canals for the lake system is 2650 km.

The plans are quite flexible, mainly because at every stage the government will assess the best possible next step.

What we saw on 8 May 2019 was the foundation stone-laying of the first village. There would definitely be several more villages as the lake expands in size. All of them will be based on the principle of mutual dependence: the village economy depending on the Lake, and the wellbeing of the Lake depending on the quality of care provided by the villages.

There would be commercial fishing companies, fish processing facilities, poultry farms, dairy farms, and related business and production activities. There would be fruit and vegetable farming though it will take a little while to determine as to what kind of fruit and vegetables can thrive around this Lake that will feed on the agricultural wastewater collected from across the country.

There were realistic looking cardboard replicas of the buildings that would be built in the village.

The village will occupy an area of 68.8 hectares. In the first phase, 104 houses will be built and the second phase will add 108 more houses. There will be a school for 320 students, a kindergarten for 160 kids, a healthcare centre, shopping centre, community centre and other facilities.

Electricity transmission lines of 160 km length will be built from the Serdar substation to provide the power to the village. 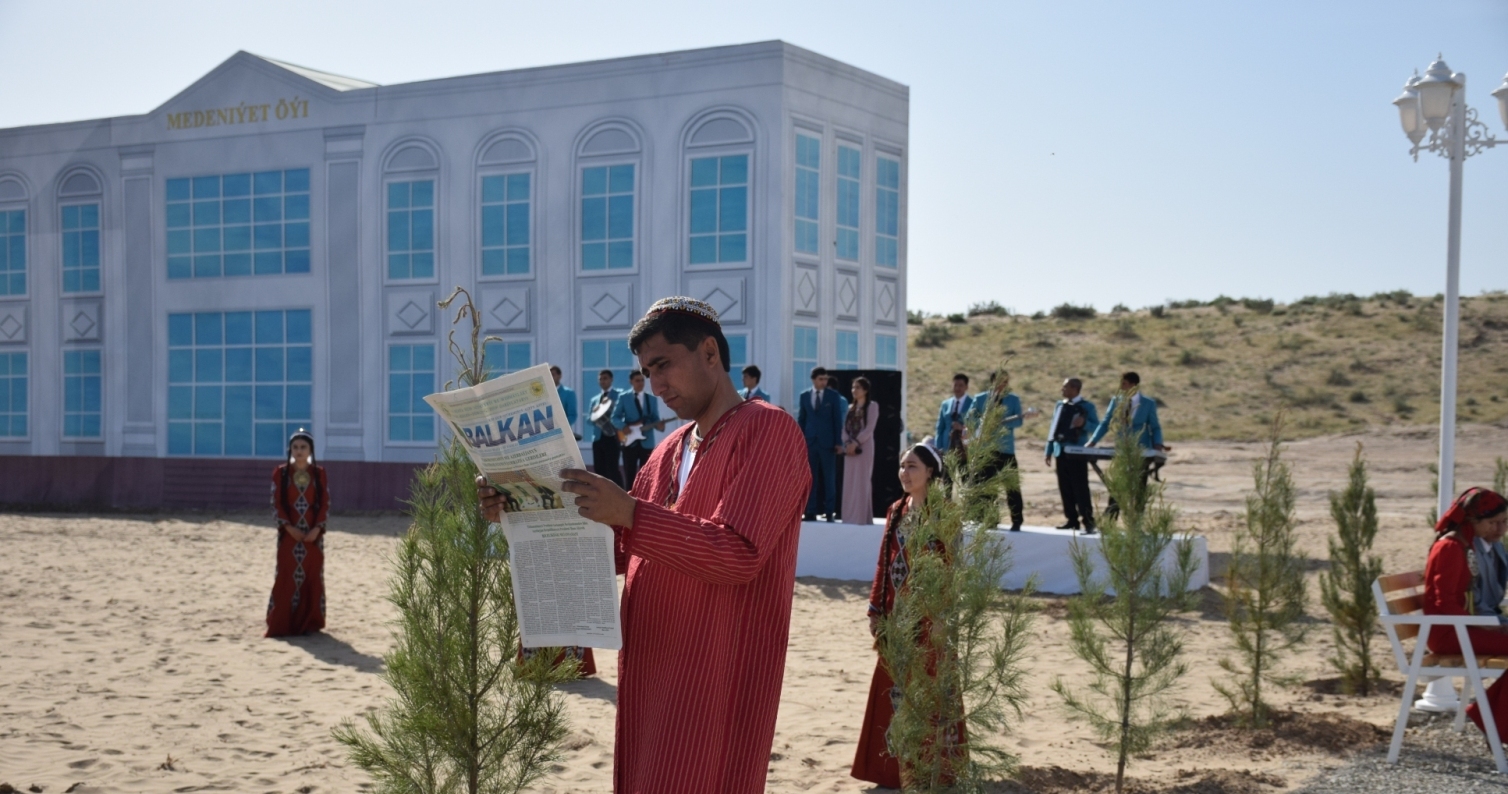 The telecommunications facilities will include the availability of the TV, radio and transmissions and Altyn Asyr cell phone network.

A two-lane road of 170 km in length will be built from the Serdar city to the village. Some 40 km of road has been built already and work is underway on another 65 km.

So far the government has spent USD 553.378 million on the lake project.

The village would also serve as a laboratory for the development of solar and wind energy solutions for Turkmenistan. A 10-megawatt powerhouse will be built to use the wind and solar potential of the Garashor depression, which happens to be in the path of a reliable wind corridor and blessed with plenty of sunshine the year round.

Addressing the participants of the ceremony, President Berdymuhamedov said, “The first stage of construction under this project is designed for the period 2019-2022, the second one – will start in 2022 with full completion of works by 2025. At the first stage, the Village Council, police and fire safety services, a secondary school for 260 children, a kindergarten for 160 children, a cultural center for 200 children, a health center, internal roads, gas supply systems, drinking water, sewage and lines will be erected power transmission, water desalination plant.”

He said that land plots would be available to the individual farmers and entrepreneurs for any kind of farming and business activity. 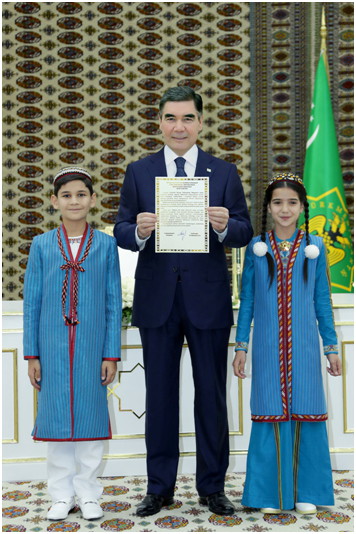 The president signed a message for the future generations, which was put in a time capsule and placed at the foundation of the first building of the village.

The colourful ceremony was put together entirely by the cultural groups of the Serdar district with some assistance from the provincial administration.

Some motorboats, sailing boats, rowboats, and kayaks had been brought to the lake to highlight some of the possibilities of such a vast body of water.

The conversation with some top officials showed that there would possibly be a sailing and yacht club at the lake. Membership would be open to the locals and foreigners. The village administration or the provincial administration will manage the club.

It was clear that the lake is already capable of sustaining the herds of livestock and a wide assortment of flora and fauna.

Some migratory birds have started landing at the lake.

In the vicinity of the lake, some animals listed in the Red Book of Turkmenistan, such as the Ustyurt mountain sheep, kulan, and gazelle are found in growing numbers.

The surrounding areas are turning into 8.6 million hectares of grazing land and forest-like growth. This can afford to sustain about 4.6 million sheep and goat and 60000 camels. In addition, it is possible to cultivate Sudan grass, barley, millet and other forage crops.

Two chefs were frying the fish freshly caught from the lake.

The media and journalists were told in a briefing that at present about 25 species of fish were thriving in the lake including carp, bream, roach, asp, grass carp, catfish, pike perch, crucian carp, Turkestan and Aral barbel, white and motley silver carp, pike, sabrefish, snakehead, etc.

It is relevant to mention that pike perch (Sudak) is among the prized game fish. It can gain up to 20kg in weight though the usual specimens are less than 10kg. It is also called Zander.

The visit to the lake was definitely an inspiring experience. There was lively chatter around the fish tables.

“I hope there is an easy way to visit here from Ashgabat.”

“Perhaps they will build an airport here.”

“This can be a great vacation spot.”

“I am sure the sunset is as beautiful as the sunrise.”

The depiction of a Phoenix stood at the site. In Turkmen mythology, a Phoenix (Kaknus) descended from the sky to Mirab (controller of water) and asked for water to quench her thirst, promising in return a miracle – in the blink of an eye to turn these places into a blooming garden.