Ashgabat, 19 Apr—The summit talks between President Berdymuhamedov of Turkmenistan and President Nazarbayev of Kazakhstan in Astana on Tuesday (18 April 2017) led to the signing of several documents including the strategic partnership agreement.

In all, nine documents were signed and a joint statement was issued by the presidents of both the countries.

With the signing of the border demarcation agreement, Turkmenistan and Kazakhstan became the first two countries in the region with no disagreement about their common borders. 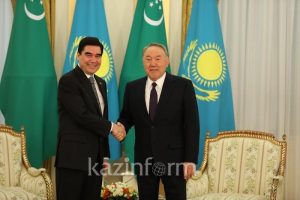 The following documents were signed after the summit talks and during other engagements: 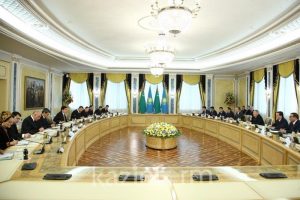 The presidents had tete-a-tete and expanded format talks, followed by a joint press conference. They did not take any questions from the media.

Both sides appreciate the current level of dialogue in all areas including politics, economy, culture and humanitarian spheres. The active cooperation between the two countries contributes to peace, stability and security in Central Asia. The cooperation between Turkmenistan and Kazakhstan is also a strategic factor for sustainability and positive development in Central Asia. The sides are committed to transforming the region in to a zone free of conflict and confrontation, and a vital component for long-term stability in the continent.

Both the countries have common approaches on key issues including the global agenda for maintenance and augmentation of peace and stability, and struggle of threats such as international terrorism, extremism and drug trafficking.

Turkmenistan and Kazakhstan are committed to the treaty on Central Asia as a nuclear-weapons-free zone.

The sides call for early settlement of the Afghan situation through political and peaceful means.

The sides will continue to cooperate actively with the international and regional organizations including the UN, OSCE, CIS, OIC and ECO.

Turkmenistan and Kazakhstan will continue their close cooperation with the other Caspian littoral states with the aim to transform Caspian into a space of peace, good-neighbourliness, harmony and mutual benefit.

The International Fund for Saving the Aral Sea (IFAS) is an important area within the environmental issues. Turkmenistan, as the current chair of IFAS has developed a concept which reflects the priority plans for joint activities of the member states.

There is the mutual desire to expand the trade volume, intensify the investment policy, enter into joint large-scale projects in the industrial sector, and build partnership in the agriculture and services sectors.

The business communities of both the countries must interact directly, especially in view of the existing industrial and infrastructure potential, and also explore the new areas for joint benefit.

Energy and transport are strategic directions of cooperation. Turkmenistan and Kazakhstan as leading producers of energy in the region have modern infrastructure and share a common vision of the configuration of the energy and transport flows in Europe and Central Asia.

The two countries have proved their ability to work together in mega-projects related to the energy and transport sectors. The examples are the Turkmenistan-China gas pipeline and the Kazakhstan-Turkmenistan-Iran railway line.

President Nazarbayev said that we are speaking of the new Silk Road which will be discussed at the One Belt, One Road forum in Beijing on 15 May 2017.

A trade delegation of 30 manufacturers from Kazakhstan related to heavy engineering, metallurgic, chemical, construction and food industries visited Turkmenistan in August 2016. Turkmenistan would like to send its trade and industry delegation to Kazakhstan next year.

Berdymuhamedov invited Nazarbayev for the opening ceremony of Ashgabat 2017 (AIMAG 2017), which will take place in Ashgabat on 17 September 2017.

Dostyk Order (Order of Friendship), one of the highest civilian award available to foreigners, was conferred by President Nazarbayev on President Berdymuhamedov in a ceremony at Ak-orda Palace in Astana on Tuesday. /// nCa 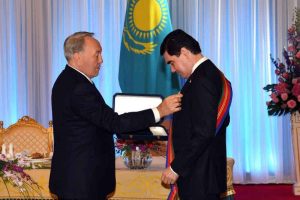 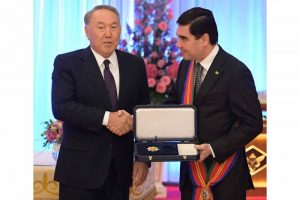