This report was recently published in our paid-subscription publication. It is now being made available for the wider audience. Ed.

Ashgabat, 21 March 2013 (nCa) — The presidents of Turkmenistan, Afghanistan and Tajikistan met Wednesday (20 Mar) in Ashgabat for a trilateral summit. There was just one point on the agenda: To build a railway line connecting the three countries.

A memorandum of understanding was signed jointly by President Berdymuhamedov of Turkmenistan, President Karzai of Afghanistan and President Rahmon of Tajikistan, committing their political will and available resources to the project.

The first phase of the project would consist of Atamurat-Imamnazar-Andkhoy-Akina segment. Of this, Atamurat-Imamnazar stretch lies in the territory of Turkmenistan and from Imamnazar the track enters Afghanistan, reaching Andkhoi and then turning north toward Akina.

President Berdymuhamedov announced during a press conference after the summit that Turkmenistan will start with the first phase in the second half of July 2013. He invited the presidents of Afghanistan and Tajikistan to participate in the opening ceremony.

Berdymuhamedov also said that Turkmenistan will finance the segment in its territory from its own sources, and depending on the availability of funds, may also build the line up to Akina.

This first phase – Atamurat-Imamnazar-Akina-Andkhoy – was initially a stand alone project, for which the basic document was signed between Turkmenistan and Afghanistan in May 2011 during the visit of President Karzai to Turkmenistan.

The trilateral summit held Wednesday expands the scope to connect the railway line with Tajikistan.

The participating countries will form an expert to push the project forward. The first meeting of the expert group will take place within one month of signing of the MoU.

From Akina the rail line will move to Mazar-e-Sharif and onward to Kholm (Tashkurgan). The route from Kholm up to the border of Tajikistan is yet to be decided. Afghanistan wants the line to go to Kunduz and then turn to the Tajik border while the Tajik side wants it to run from Kholm directly to Kaldar at their border.

The distance from Imamnazar up to Kholm, on the intended route, is about 260 km. If the line goes to Kunduz and then to the Tajik border, it would add another 120 km to the total length. If it runs directly from Kholm to Kaldar, it would add about 60 km to the length.

From Atamurat to Imamnazar it is 85 km, all in the territory of Turkmenistan.

It was evident from the speeches at the trilateral summit and the remarks of the three presidents during the press conference that there was not merely consensus but full, unanimous and enthusiastic support for the project.

During the press conference President Berdymuhamedov took three questions on the railway project, one each from the Turkmen, Tajik and Afghan journalists. His answers, summarized below, give the essence and spirit of this collaborative enterprise:

Turkmenistan is actively pursuing diversification of transport routes, integrating the region into the international economic environment. This is evidenced by our efforts to create north-south railway network and the Central Asia-Caspian Sea-Black Sea transport link.

The countries in the Asia-Pacific region such as China and India are developing dynamically and Turkmenistan seeks to establish transport links with these and other countries in the Far East, and South and South-East Asia. Our nearest neighbours have always been our reliable partners and the railway link between Turkmenistan, Afghanistan and Tajikistan will help expand the international transport infrastructure.

The rail link will also afford our countries and the region the access to the world markets and at the same time it will boost trade and economic relations between Asia and Europe.

This is, technically, a quite complex project; for instance, from Atamurat to Imamnazar, there would be the need to build two bridges. However, we have thoroughly considered all aspects of this undertaking and our railways experts have fully worked out the related issues. Moreover, Turkmenistan has considerable experience in railway construction: we have built the Ashgabat-Dashoguz railway line, the 200 km line from Atamurat to Garlyk, and the 500 km Bereket-Serhetkaya segment of the 700-km north-south railway project.

President Karzai of Afghanistan agreed that the railway line would benefit not only the participating countries but the entire region and beyond. He said that Afghanistan will make every effort to implement this ambitious project.

President Rahmon of Tajikistan echoed the same views and added that his foreign office will open talks with ADB, IsDB, Japan and other likely institutions and countries for funding the project. He said that Tajikistan has been studying this idea since 1990s.

It is too early to speculate on the project cost because the feasibility study, assuming there is one already, has not been made available to the media. Also, so much depends on the cost of construction materials in the next few years and the unpredictable security situation, which may push the price upward.

To pull some figure out of the hat, let’s look at the cost of two projects, one in Nigeria and the other in Iran, both being done by the Chinese companies:

Keeping in mind that the terrain and working environment in Afghanistan is a lot tougher than Iran or Nigeria, and also assuming that no part of the railway line needs to go through a tunnel or underground, and it is double track, the cost would be no less than US $ 4 million per km, probably more.

To arrive at an approximate figure, we can say that the rail track within the territory of Afghanistan would about US $ 1.6 billion (400km x 4mln).

Even if the actual cost turns out to be in the vicinity of US $ 2 billion, it should not be difficult to muster the finances.

Apart from the obvious sources such as ADB (Asian Development Bank) and IsDB (Islamic Development Bank), the participating countries could ask China to fund the project. China would be a major beneficiary of this railway line, enjoying a hassle free access to its mining and mineral interests in Afghanistan and a shorter route to the increasingly affluent consumer base in Central Asia, Iran and beyond.

For pitching this project to the potential financiers, the project planners can highlight that the average speed of a freight train is 50 mph (80 km per hour) – the maxim speed on conventional track being 120 km and very cautious speed 48 km per hour.

At the average speed i.e. 80 km per hour, the cargo train leaving the Tajik border would reach Turkmenistan in less than 6 hours. Even at the slow speed of 48 km, the travel time between the Tajik and Turkmen borders would be no more than 10 hours. This calculation is based on the assumption that no refueling or change of locomotive stop is made in Afghanistan and no technical delays take place.

A secondary but very important benefit is that the rail track would help bypass Uzbekistan, a country that has traditionally played a spoiler for the regional integration.

The advantages of this project are enormous and multidimensional. They far outweigh the financial cost that would go into it.

In short, this is prosperity, peace and stability on iron wheels. 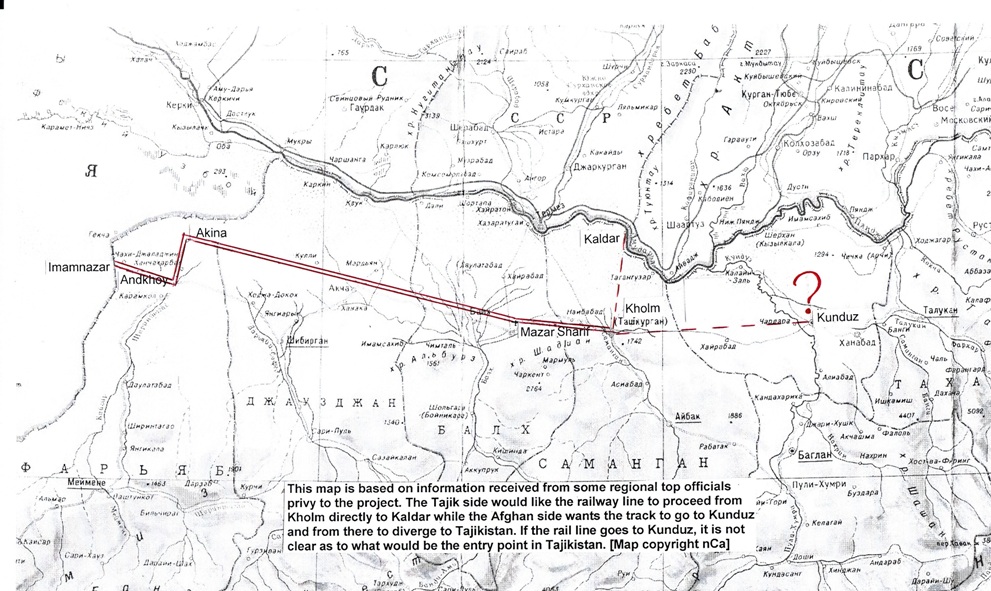