You are here: Home / Articles And Reports / Bronze Age Archaeology in Turkmenistan

Introduction: In the past years a number of conferences were organized in Ashgabat and Mary in which recent research results about the archeological heritage of Turkmenistan were communicated to a Turkmen and international audience demonstrating cultural assets that compare to those of the most famous Bronze Age cultures world-wide. In the following article an experienced archeologist from the German Archaeological Institute in Berlin presents a short characterization of the most important prehistoric sites in Turkmenistan.

It is evident, that the presentation of this cultural heritage to a larger audience world-wide would strongly spur the interest in Turkmen culture and Turkmenistan altogether. A good start could be an exhibition of bronze-age artifacts from sites like Gonur depe in international centers with a decade-long proven record in archeology as proposed by the German archeological institutes in Hamburg and Berlin. These exhibitions would address a huge number of people who could be the future tourists coming to Turkmenistan and also familiarize them with the present-day country.

Among specialists the Bronze Age of Turkmenistan is well-known. However, this is not (yet) true for non-archeologists, who have only a reduced access to the knowledge of the artistic, economic and spiritual achievements of the ancient inhabitants of Turkmenistan such a long time ago.

On the territory of modern Turkmenistan and in neighboring regions of Central Asia around 4500 years ago highly developed civilizations formed, now known to specialists as the Bactro-Margiana-Archaeological Complex (BMAC), the Anau-Civilization or the Oxus Civilization. A local variant in southern Uzbekistan is also known as the Sapalli Culture, comprising mainly the sites of Sapalli and Dzharkutan.

Anau, not far to the east of Ashgabat in the foothills of the Kopet Dagh, has been researched for over 100 years, beginning with the excavations by R. Pumpelly, published in 1908, and still studied recently by a joint Turkmen-American expedition headed by F. Hiebert. The discoveries led to the first definition of the culture, sometimes still named as “Anau”, and the recent research has brought new information on the development of early urban structures, as well as on economy, such as the cultivation of the now famous early bread-wheat.

Namazga depe, near Kaka, was studied from 1949 onwards by soviet scientists. The large mound (700 x 900 m) certainly represents a Bronze Age city. Although only small surfaces were opened, its importance lies in the long sequence, as it was continuously settled from the Neolithic period to the Late Bronze Age. The partition into stages Namazga I-VI is still used today for the periodization of the prehistory of Turkmenistan and the neighboring countries.

Perhaps the gold and turquoise head of a bull is the most famous object from Altyn depe, studied for many years by an expedition headed by V. Masson. The small figure gave him reason to propose a “bull-cult” of the Bronze Age, which has, however, not been confirmed in other sites of the BMAC.

Ulug depe, as the name meaning “big mound” already suggests, is one of the largest archeological sites in the Kopet Dagh foreland, in the Dushak area. It was initially studied by V. Sarianidi and research is continuing by a Turkmen-French expedition. Less well known for the Bronze Age the Iron Age citadel on the top of the mound is well preserved and shows a complex architectural plan.

V. Sarianidi, who is the most celebrated living researcher of the Bronze Age of Turkmenistan, also excavated Togolok, situated north of Mary in ancient Margiana. The main site in this large oasis contains a complex palace – temple building and is one of the best studied sites of the BMAC.

It is also V. Sarianidi who has for many years now headed the excavations at the most important site of the BMAC: Gonur depe, in the heart of Margiana north of Mary. Here a very large city has been excavated almost completely, allowing us to understand planning structures and architectural layout, as well as the material, artistic and spiritual culture of the Bronze Age. The center is again represented by a palace – temple building, surrounded by a fortification wall with towers, just like in Togolok and other sites. However, in Gonur depe the surrounding city, with three encircling walls known now, has also been excavated. Thus we have information not only of the material culture and the architectural abilities of the Bronze Age people in Turkmenistan, but by the interpretation and combination of the data also on many aspects of their religion. Presumably the roots of what was later cast into an important Old World religion by Zoroaster are to be found here. New research has also identified the village settlements at a greater distance, which probably supported the city economically. More spectacular is the fact that Sarianidi, in the hard work of many years, has succeeded in uncovering the only royal graves of the Bronze Age known from Central Asia so far. Although partly plundered in Antiquity, the wealth and beauty of the situations and materials found places the BMAC on the same cultural level as any of the other great civilizations known from the Bronze Age worldwide (Egypt, Greece, Mesopotamia, the Indus, China). Imports prove trade relations as far as the Indus, to Iran, deep into the northern steppes and possibly even to China. Even though writing has not been identified for the BMAC of Turkmenistan, this culture clearly ranks among the highly developed civilizations.

The Bronze Age was a period in which the people from the territory of Turkmenistan evidently took part in world trade and contributed to development by artistic and technical innovations and mastery. These aspects of historical achievements, unfortunately, so far are well known only to specialists and need to be publicized more widely. This may be done either by increased tourism, and/or by showing the finds and explaining the results in exhibitions outside Turkmenistan. Tourism is still not well developed as may be observed by the statistics on Central Asia: in 2007, the last year for which statistics exist for Turkmenistan, only 8,000 people visited the country, while Tajikistan was visited by 327,000, Uzbekistan saw 903, visited 000 visitors and Kazakhstan 3,876,000 (data from worldbank.org). An important stimulus for tourism is the acquaintance with the history and culture of the countries visited. Besides making the history and culture of these countries better known, the tourism industry is also an economic factor, accounting for $ 1,213,000,000 of the economy in Kazakhstan in 2007 (data from indexmundi.com). Clearly this also needs some investment – e.g. at Gonur depe there is still no possibility for tourists to have a lunch-break protected from the hot and dusty winds of the Karakum deserts and there are no sanitary facilities, although this could be done at a quite low cost.

The other possibility is exhibitions in other countries, which attract large numbers of visitors. For example in Germany and the United States, archaeological and historical exhibitions are regularly visited by several hundreds of thousands of people who can, for one reason or another, not visit the countries where the materials come from. Of course such exhibitions are only temporary, all the material remaining in the possession of the country which lends them and returning home after some months of “travelling”. The interest in archaeology and history is obviously very great world-wide and gives a better understanding of the achievements of other cultures and their place in the history of mankind.

Although so far no exhibitions with the heritage of Turkmenistan have been shown abroad, this would be a chance to portrait the historical and artistic achievements of a great civilization for a large audience. 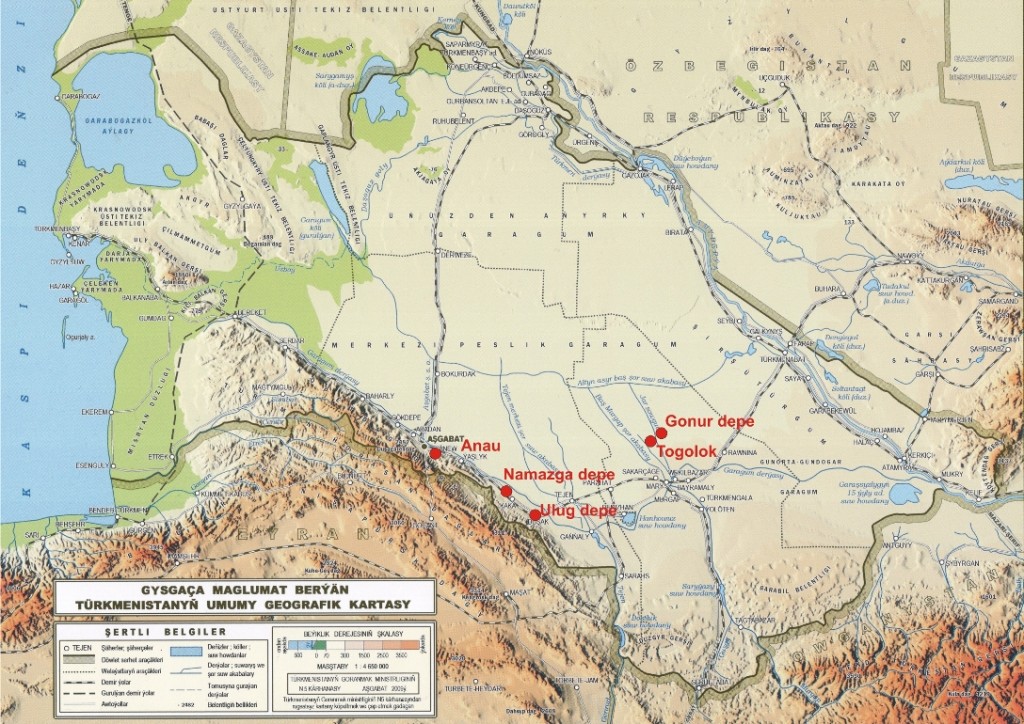